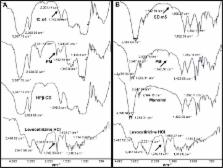 Levocetirizine HCl, a second-generation piperazine derivative and H 1-selective antihistaminic agent, possesses few side effects. The first objective of the study was to compare and evaluate the taste-masking effect of different ratios of 2-hydroxypropyl-β-cyclodextrin and mannitol on levocetirizine HCl using an inclusion complex and solid dispersion, respectively. The second objective was to study the possibility of preparing and evaluating effervescent tablets from the best-chosen taste-masked blends for the purpose of their use either as orodispersible tablets or as water-soluble effervescent tablets, according to patients’ will.

Prepared taste-masked blends were prepared and subjected to palatability, Fourier-transform infrared spectroscopy, and differential scanning calorimetry studies. Tablets containing different percentages of effervescent mixtures were prepared by direct compression on the selected taste-modified blends. Evaluation tests were conducted, including flowability and compressibility on the precompressed blends and hardness, friability, wetting time, effervescent time, in vitro, in vivo disintegration time, and in vitro dissolution study on the compressed tablets. Formulated tablets were evaluated and compared to marketed orodispersible tablets for mouth feel and palatability.

All prepared tablets showed convenient physical and palatability properties compared to the selected brand. The in vitro drug-release study revealed fast release of levocetirizine HCl within 5 minutes from all prepared tablets.

Inclusion complexes of tadalafil with natural and chemically modified beta-cyclodextrins. I: preparation and in-vitro evaluation.

Seham Elkheshen,  Shaimaa M. Badr-Eldin,  Mostafa Ghorab (2008)
The aim of this work was to investigate the inclusion complexation between tadalafil, a practically insoluble selective phosphodiesterase-5 inhibitor (PDE5), and two chemically modified beta-cyclodextrins: hydroxypropyl-beta-cyclodextrin (HP-beta-CD) and heptakis-[2,6-di-O-methyl]-beta-cyclodextrin (DM-beta-CD), in comparison with the natural beta-cyclodextrin (beta-CD) in order to improve the solubility and the dissolution rate of the drug in an attempt to enhance its bioavailability. Inclusion complexation was investigated in both the solution and the solid state. The UV spectral shift method indicated guest-host complex formation between tadalafil and the three cyclodextrins (CDs). The phase solubility profiles with all the used CDs were classified as A(p)-type, indicating the formation of higher order complexes. The complexation efficiency values (CE), which reflect the solubilizing power of the CDs towards the drug, could be arranged in the following order: DM-beta-CD>HP-beta-CD>beta-CD. Solid binary systems of tadalafil with CDs were prepared by kneading and freeze-drying techniques at molar ratios of 1:1, 1:3 and 1:5 (drug to CD). Physical mixtures were prepared in the same molar ratios for comparison. Physicochemical characterization of the prepared systems at molar ratio of 1:5 was studied using differential scanning calorimetry (DSC), X-ray diffractometry (XRD), and Fourier-transform infrared spectroscopy (FTIR). The results showed the formation of true inclusion complexes between the drug and both HP-beta-CD and DM-beta-CD using the freeze-drying method at molar ratio of 1:5. In contrast, crystalline drug was detectable in all other products. The dissolution of tadalafil from all the prepared binary systems was carried out to determine the most appropriate CD type, molar ratio, and preparation technique to prepare inclusion complexes to be used in the development of tablet formulation for oral delivery of tadalafil. The dissolution enhancement was increased on increasing the CD proportion in all the prepared systems. Both the CD type and the preparation technique played an important role in the performance of the system. Irrespective of the preparation technique, the systems prepared using HP-beta-CD and DM-beta-CD yielded better performance than the corresponding ones prepared using beta-CD. In addition, the freeze-drying technique showed superior dissolution enhancement than other methods especially when combined with the beta-CD derivatives.