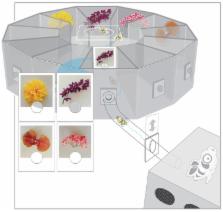 Searching for the memory trace in a mini-brain, the honeybee.

R. G. Menzel (2015)
To determine general or species-specific properties in neural systems, it is necessary to use comparative data in evaluating experimental findings. Presented here are data on associative learning and memory formation in honeybees, emphasizing a comparative approach. We focus on four aspects: (1) the role of an identified neuron, VUM(mx1), as a neural substrate of appetitive reinforcement; (2) the sequences of molecular events as they correlate with five forms of memory stages; (3) the localization of the memory traces following appetitive olfactory learning; and (4) the brief description of several forms of complex learning in bees (configuration in olfactory conditioning, categorization in visual feature learning, delayed matching-to-sample learning, and latent learning in navigation). VUM(mx1) activity following the conditioned stimulus odor is sufficient to replace the unconditioned stimulus, and VUM(mx1) changes its response properties during learning similarly to what is known from dopamine neurons in the basal ganglia of the mammalian brain. The transition from short- to mid- and long-term forms of memory can be related to specific activation of second messenger cascades (involving NOS, PKA, PKC, and PKM) resembling general features of neural plasticity at the cellular level. The particular time course of the various memory traces may be adapted to the behavioral context in which they are used; here, the foraging cycle of the bee. Memory traces for even such a simple form of learning as olfactory conditioning are multiple and distributed, involving first- and second-order sensory neuropils (antennal lobe and mushroom bodies), but with distinctly different properties. The wealth of complex forms of learning in the context of foraging indicates basic cognitive capacities based on rule extraction and context-dependent learning. It is believed that bees might be a useful model for studying cognitive faculties at a middle level of complexity.

Johannes Spaethe,  Adrian Dyer,  Sabina Prack (2008)
Bumblebee (Bombus terrestris) discrimination of targets with broadband reflectance spectra was tested using simultaneous viewing conditions, enabling an accurate determination of the perceptual limit of colour discrimination excluding confounds from memory coding (experiment 1). The level of colour discrimination in bumblebees, and honeybees (Apis mellifera) (based upon previous observations), exceeds predictions of models considering receptor noise in the honeybee. Bumblebee and honeybee photoreceptors are similar in spectral shape and spacing, but bumblebees exhibit significantly poorer colour discrimination in behavioural tests, suggesting possible differences in spatial or temporal signal processing. Detection of stimuli in a Y-maze was evaluated for bumblebees (experiment 2) and honeybees (experiment 3). Honeybees detected stimuli containing both green-receptor-contrast and colour contrast at a visual angle of approximately 5 degrees , whilst stimuli that contained only colour contrast were only detected at a visual angle of 15 degrees . Bumblebees were able to detect these stimuli at a visual angle of 2.3 degrees and 2.7 degrees , respectively. A comparison of the experiments suggests a tradeoff between colour discrimination and colour detection in these two species, limited by the need to pool colour signals to overcome receptor noise. We discuss the colour processing differences and possible adaptations to specific ecological habitats.