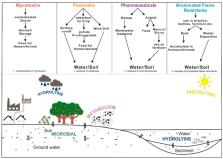 The formation of transformation products (TPs) from contaminants and residues is becoming an increasing focus of scientific community. All organic compounds can form different TPs, thus demonstrating the complexity and interdisciplinarity of this topic. The properties of TPs could stand in relation to the unchanged substance or be more harmful and persistent. To get important information about the generated TPs, methods are needed to simulate natural and manmade transformation processes. Current tools are based on metabolism studies, photochemical methods, electrochemical methods, and Fenton’s reagent. Finally, most transformation processes are based on redox reactions. This review aims to compare these methods for structurally different compounds. The groups of pesticides, pharmaceuticals, brominated flame retardants, and mycotoxins were selected as important residues/contaminants relating to their worldwide occurrence and impact to health, food, and environmental safety issues. Thus, there is an increasing need for investigation of transformation processes and identification of TPs by fast and reliable methods.

F. Peter Guengerich (2001)
Cytochrome P450 (P450) enzymes catalyze a variety of reactions and convert chemicals to potentially reactive products as well as make compounds less toxic. Most of the P450 reactions are oxidations. The majority of these can be rationalized in the context of an FeO(3+) intermediate and odd electron abstraction/rebound mechanisms; however, other iron-oxygen complexes are possible and alternate chemistries can be considered. Another issue regarding P450-catalyzed reactions is the delineation of rate-limiting steps in the catalytic cycle and the contribution to reaction selectivity. In addition to the rather classical oxidations, P450s also catalyze less generally discussed reactions including reduction, desaturation, ester cleavage, ring expansion, ring formation, aldehyde scission, dehydration, ipso attack, one-electron oxidation, coupling reactions, rearrangement of fatty acid and prostaglandin hydroperoxides, and phospholipase activity. Most of these reactions are rationalized in the context of high-valent iron-oxygen intermediates and Fe(2+) reductions, but others are not and may involve acid-base catalysis. Some of these transformations are involved in the bioactivation and detoxication of xenobiotic chemicals.