Minocycline for Controlling Neuropathic Pain: A Systematic Narrative Review of Studies in Humans 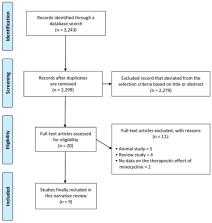 The primary literature search yielded 2299 relevant papers. Based on the assessment of the titles, abstracts, and full-text, nine publications were selected for this review. Only four of the nine studies showed a positive pain-reducing outcome after minocycline administration. Two of the three studies on chemotherapy-induced neuropathic pain showed a positive pain-reducing effect. Minocycline was effective in controlling pain from diabetic and leprotic neuropathies. However, minocycline was not effective in controlling lumbar radicular pain and pain resolution after carpal tunnel release.

Our review provides evidence that minocycline may have some potential for reducing neuropathic pain. Further high-quality studies need to be conducted to validate this potential.

Minocycline: far beyond an antibiotic.

N Garrido-Mesa,  A Zarzuelo,  J Galvez (2013)
Minocycline is a second-generation, semi-synthetic tetracycline that has been in therapeutic use for over 30 years because of its antibiotic properties against both gram-positive and gram-negative bacteria. It is mainly used in the treatment of acne vulgaris and some sexually transmitted diseases. Recently, it has been reported that tetracyclines can exert a variety of biological actions that are independent of their anti-microbial activity, including anti-inflammatory and anti-apoptotic activities, and inhibition of proteolysis, angiogenesis and tumour metastasis. These findings specifically concern to minocycline as it has recently been found to have multiple non-antibiotic biological effects that are beneficial in experimental models of various diseases with an inflammatory basis, including dermatitis, periodontitis, atherosclerosis and autoimmune disorders such as rheumatoid arthritis and inflammatory bowel disease. Of note, minocycline has also emerged as the most effective tetracycline derivative at providing neuroprotection. This effect has been confirmed in experimental models of ischaemia, traumatic brain injury and neuropathic pain, and of several neurodegenerative conditions including Parkinson's disease, Huntington's disease, amyotrophic lateral sclerosis, Alzheimer's disease, multiple sclerosis and spinal cord injury. Moreover, other pre-clinical studies have shown its ability to inhibit malignant cell growth and activation and replication of human immunodeficiency virus, and to prevent bone resorption. Considering the above-mentioned findings, this review will cover the most important topics in the pharmacology of minocycline to date, supporting its evaluation as a new therapeutic approach for many of the diseases described herein. © 2013 The Authors. British Journal of Pharmacology © 2013 The British Pharmacological Society.

Inhibition of microglial activation attenuates the development but not existing hypersensitivity in a rat model of neuropathy.

F Y Tanga,  Joyce DeLeo,  V Raghavendra (2003)
Microglia, the intrinsic macrophages of the central nervous system, have previously been shown to be activated in the spinal cord in several rat mononeuropathy models. Activation of microglia and subsequent release of proinflammatory cytokines are known to play a role in inducing a behavioral hypersensitive state (hyperalgesia and allodynia) in these animals. The present study was undertaken to determine whether minocycline, an inhibitor of microglial activation, could attenuate both the development and existing mechanical allodynia and hyperalgesia in an L5 spinal nerve transection model of neuropathic pain. In a preventive paradigm (to study the effect on the development of hypersensitive behaviors), minocycline (10, 20, or 40 mg/kg intraperitoneally) was administered daily, beginning 1 h before nerve transection. This regimen produced a decrease in mechanical hyperalgesia and allodynia, with a maximum inhibitory effect observed at the dose of 20 and 40 mg/kg. The attenuation of the development of hyperalgesia and allodynia by minocycline was associated with an inhibitory action on microglial activation and suppression of proinflammatory cytokines at the L5 lumbar spinal cord of the nerveinjured animals. The effect of minocycline on existing allodynia was examined after its intraperitoneal administration initiated on day 5 post-L5 nerve transection. Although the postinjury administration of minocycline significantly inhibited microglial activation in neuropathic rats, it failed to attenuate existing hyperalgesia and allodynia. These data demonstrate that inhibition of microglial activation attenuated the development of behavioral hypersensitivity in a rat model of neuropathic pain but had no effect on the treatment of existing mechanical allodynia and hyperalgesia.

Alban Latremoliere,  Clifford Woolf (2009)
Central sensitization represents an enhancement in the function of neurons and circuits in nociceptive pathways caused by increases in membrane excitability and synaptic efficacy as well as to reduced inhibition and is a manifestation of the remarkable plasticity of the somatosensory nervous system in response to activity, inflammation, and neural injury. The net effect of central sensitization is to recruit previously subthreshold synaptic inputs to nociceptive neurons, generating an increased or augmented action potential output: a state of facilitation, potentiation, augmentation, or amplification. Central sensitization is responsible for many of the temporal, spatial, and threshold changes in pain sensibility in acute and chronic clinical pain settings and exemplifies the fundamental contribution of the central nervous system to the generation of pain hypersensitivity. Because central sensitization results from changes in the properties of neurons in the central nervous system, the pain is no longer coupled, as acute nociceptive pain is, to the presence, intensity, or duration of noxious peripheral stimuli. Instead, central sensitization produces pain hypersensitivity by changing the sensory response elicited by normal inputs, including those that usually evoke innocuous sensations. In this article, we review the major triggers that initiate and maintain central sensitization in healthy individuals in response to nociceptor input and in patients with inflammatory and neuropathic pain, emphasizing the fundamental contribution and multiple mechanisms of synaptic plasticity caused by changes in the density, nature, and properties of ionotropic and metabotropic glutamate receptors.

This research was supported by the 2020 Joint Research Project of Institutes of Science and Technology.