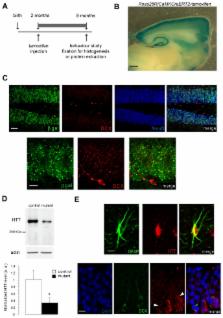 Huntington’s disease (HD) is a fatal neurodegenerative disease, characterized by motor defects and psychiatric symptoms, including mood disorders such as anxiety and depression. HD is caused by an abnormal polyglutamine (polyQ) expansion in the huntingtin (HTT) protein. The development and analysis of various mouse models that express pathogenic polyQ-HTT revealed a link between mutant HTT and the development of anxio-depressive behaviors and various hippocampal neurogenesis defects. However, it is unclear whether such phenotype is linked to alteration of HTT wild-type function in adults. Here, we report the analysis of a new mouse model in which HTT is inducibly deleted from adult mature cortical and hippocampal neurons using the CreER T2/Lox system. These mice present defects in both the survival and the dendritic arborization of hippocampal newborn neurons. Our data suggest that these non-cell autonomous effects are linked to defects in both BDNF transport and release upon HTT silencing in hippocampal neurons, and in BDNF/TrkB signaling. The controlled deletion of HTT also had anxiogenic-like effects. Our results implicate endogenous wild-type HTT in adult hippocampal neurogenesis and in the control of mood disorders.

L F Reichardt,  Norden Huang (2002)
Trk receptors are a family of three receptor tyrosine kinases, each of which can be activated by one or more of four neurotrophins-nerve growth factor (NGF), brain-derived neurotrophic factor (BDNF), and neurotrophins 3 and 4 (NT3 and NT4). Neurotrophin signaling through these receptors regulates cell survival, proliferation, the fate of neural precursors, axon and dendrite growth and patterning, and the expression and activity of functionally important proteins, such as ion channels and neurotransmitter receptors. In the adult nervous system, the Trk receptors regulate synaptic strength and plasticity. The cytoplasmic domains of Trk receptors contain several sites of tyrosine phosphorylation that recruit intermediates in intracellular signaling cascades. As a result, Trk receptor signaling activates several small G proteins, including Ras, Rap-1, and the Cdc-42-Rac-Rho family, as well as pathways regulated by MAP kinase, PI 3-kinase and phospholipase-C-gamma (PLC-gamma). Trk receptor activation has different consequences in different cells, and the specificity of downstream Trk receptor-mediated signaling is controlled through expression of intermediates in these signaling pathways and membrane trafficking that regulates localization of different signaling constituents. Perhaps the most fascinating aspect of Trk receptor-mediated signaling is its interplay with signaling promoted by the pan-neurotrophin receptor p75NTR. p75NTR activates a distinct set of signaling pathways within cells that are in some instances synergistic and in other instances antagonistic to those activated by Trk receptors. Several of these are proapoptotic but are suppressed by Trk receptor-initiated signaling. p75NTR also influences the conformations of Trk receptors; this modifies ligand-binding specificity and affinity with important developmental consequences.

Matthew S Grubb,  Mariana Alonso,  Pierre-Marie Lledo (2006)
The adult brain is a plastic place. To ensure that the mature nervous system's control of behaviour is flexible in the face of a varying environment, morphological and physiological changes are possible at many levels, including that of the entire cell. In two areas of the adult brain - the olfactory bulb and the dentate gyrus - new neurons are generated throughout life and form an integral part of the normal functional circuitry. This process is not fixed, but highly modulated, revealing a plastic mechanism by which the brain's performance can be optimized for a given environment. The functional benefits of this whole-cell plasticity, however, remain a matter for debate.

Neurogenesis-dependent and -independent effects of fluoxetine in an animal model of anxiety/depression.

Denis J. David,  Benjamin Adam Samuels,  Quentin Rainer … (2009)
Understanding the physiopathology of affective disorders and their treatment relies on the availability of experimental models that accurately mimic aspects of the disease. Here we describe a mouse model of an anxiety/depressive-like state induced by chronic corticosterone treatment. Furthermore, chronic antidepressant treatment reversed the behavioral dysfunctions and the inhibition of hippocampal neurogenesis induced by corticosterone treatment. In corticosterone-treated mice where hippocampal neurogenesis is abolished by X-irradiation, the efficacy of fluoxetine is blocked in some, but not all, behavioral paradigms, suggesting both neurogenesis-dependent and -independent mechanisms of antidepressant action. Finally, we identified a number of candidate genes, the expression of which is decreased by chronic corticosterone and normalized by chronic fluoxetine treatment selectively in the hypothalamus. Importantly, mice deficient in one of these genes, beta-arrestin 2, displayed a reduced response to fluoxetine in multiple tasks, suggesting that beta-arrestin signaling is necessary for the antidepressant effects of fluoxetine.

Competing Interests: FS is an Academic Editor at PLOS ONE. This does not alter the authors’ adherence to all the PLOS ONE policies on sharing data and materials.

This work was supported by grants from Agence Nationale pour la Recherche (ANR-08-MNP-039, FS), Fondation pour la Recherche Médicale (FRM, équipe labellisée) (FS), CNRS, INSERM and the Institut Curie (FS). SO was supported by the French Minister of Research. FS and SH are INSERM investigators; AMG, DJD. and PP are respectively professors and assistant professors at Université Paris-Sud. The funders had no role in study design, data collection and analysis, decision to publish, or preparation of the manuscript.