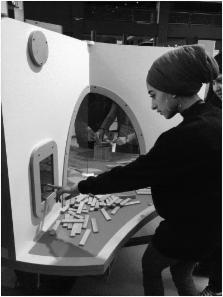 In this paper we highlight the issues and opportunities of a participatory action research (PAR) and co-design project, currently being undertaken as engaged research between academics at Durham University and practitioners at the UK’s International Centre for Life in Newcastle-Upon-Tyne (CfL; see creativescienceatlife.com for more information and developments). The focus is on the use of PAR to enable university researchers and Science Centre professionals to co-design Informal Science Learning exhibits that enhance creativity and innovation in young people. We define the principles of PAR and explore reasons for adopting the approach. An account is provided of the iterative co-design and piloting of a novel exhibit within a new exhibition space at the CfL. Reflections collated independently by the practitioners and the academics involved highlighting the development of ideas and insights over the course of the PAR process. We discuss how PAR enabled effective engagement with and creation of enriched knowledge, and innovation, in both the academy and science-learning professionals. The added value of PAR and co-production to our project aligns with current calls for a redefining of how societal impact of academic research is considered.

The equivalence of learning paths in early science instruction: effect of direct instruction and discovery learning.

D Klahr,  M Nigam (2004)
In a study with 112 third- and fourth-grade children, we measured the relative effectiveness of discovery learning and direct instruction at two points in the learning process: (a) during the initial acquisition of the basic cognitive objective (a procedure for designing and interpreting simple, unconfounded experiments) and (b) during the subsequent transfer and application of this basic skill to more diffuse and authentic reasoning associated with the evaluation of science-fair posters. We found not only that many more children learned from direct instruction than from discovery learning, but also that when asked to make broader, richer scientific judgments, the many children who learned about experimental design from direct instruction performed as well as those few children who discovered the method on their own. These results challenge predictions derived from the presumed superiority of discovery approaches in teaching young children basic procedures for early scientific investigations.

Patrick Shafto,  Elizabeth Bonawitz,  G-H Gweon … (2011)
Motivated by computational analyses, we look at how teaching affects exploration and discovery. In Experiment 1, we investigated children's exploratory play after an adult pedagogically demonstrated a function of a toy, after an interrupted pedagogical demonstration, after a naïve adult demonstrated the function, and at baseline. Preschoolers in the pedagogical condition focused almost exclusively on the target function; by contrast, children in the other conditions explored broadly. In Experiment 2, we show that children restrict their exploration both after direct instruction to themselves and after overhearing direct instruction given to another child; they do not show this constraint after observing direct instruction given to an adult or after observing a non-pedagogical intentional action. We discuss these findings as the result of rational inductive biases. In pedagogical contexts, a teacher's failure to provide evidence for additional functions provides evidence for their absence; such contexts generalize from child to child (because children are likely to have comparable states of knowledge) but not from adult to child. Thus, pedagogy promotes efficient learning but at a cost: children are less likely to perform potentially irrelevant actions but also less likely to discover novel information. Copyright © 2010. Published by Elsevier B.V.