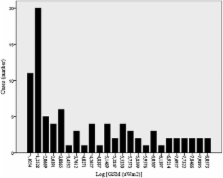 We performed a re-analysis of the data from Navarro et al (2003) in which health symptoms related to microwave exposure from mobile phone base stations (BSs) were explored, including data obtained in a retrospective inquiry about fear of exposure from BSs.

Participants with known illness in 2003 were subsequently disregarded: 88 participants instead of 101 (in 2003) were analysed. Since weather circumstances can influence exposure, we restricted data to measurements made under similar weather conditions.

A statistical method indifferent to the assumption of normality was employed: namely, binary logistic regression for modelling a binary response (eg, suffering fatigue (1) or not (0)), and so exposure was introduced as a predictor variable. This analysis was carried out on a regular basis and bootstrapping (95% percentile method) was used to provide more accurate CIs.

This study confirms our preliminary results. We observed that the incidence of most of the symptoms was related to exposure levels—independently of the demographic variables and some possible risk factors. Concerns about adverse effects from exposure, despite being strongly related with sleep disturbances, do not influence the direct association between exposure and sleep.

Martin L Pall (2013)
The direct targets of extremely low and microwave frequency range electromagnetic fields (EMFs) in producing non-thermal effects have not been clearly established. However, studies in the literature, reviewed here, provide substantial support for such direct targets. Twenty-three studies have shown that voltage-gated calcium channels (VGCCs) produce these and other EMF effects, such that the L-type or other VGCC blockers block or greatly lower diverse EMF effects. Furthermore, the voltage-gated properties of these channels may provide biophysically plausible mechanisms for EMF biological effects. Downstream responses of such EMF exposures may be mediated through Ca2+/calmodulin stimulation of nitric oxide synthesis. Potentially, physiological/therapeutic responses may be largely as a result of nitric oxide-cGMP-protein kinase G pathway stimulation. A well-studied example of such an apparent therapeutic response, EMF stimulation of bone growth, appears to work along this pathway. However, pathophysiological responses to EMFs may be as a result of nitric oxide-peroxynitrite-oxidative stress pathway of action. A single such well-documented example, EMF induction of DNA single-strand breaks in cells, as measured by alkaline comet assays, is reviewed here. Such single-strand breaks are known to be produced through the action of this pathway. Data on the mechanism of EMF induction of such breaks are limited; what data are available support this proposed mechanism. Other Ca2+-mediated regulatory changes, independent of nitric oxide, may also have roles. This article reviews, then, a substantially supported set of targets, VGCCs, whose stimulation produces non-thermal EMF responses by humans/higher animals with downstream effects involving Ca2+/calmodulin-dependent nitric oxide increases, which may explain therapeutic and pathophysiological effects.

Charlotte Braun-Fahrländer,  Martin Meier-Schellersheim,  Yvonne Baldinini … (2004)
From June 2001, health questionnaires were distributed to people who complained about symptoms of ill health which they ascribed to exposure to electromagnetic fields (EMF). The objective of the survey was to gain a better knowledge of the anxieties of complainants, to obtain hints of possible problems and of actions that should be taken to solve the problems. The survey was not designed to establish a causal association between exposure to EMF and symptoms of ill health. Within one year, 429 questionnaires were returned of which 394 persons reported symptoms. The average age of the complainants was 51.0 years and 57 percent were female. The complainants were older, had a higher educational level and were more likely to be married compared to the general Swiss population. A mean of 2.7 different symptoms were reported. Sleep disorders (58%), headaches (41%), nervousness or distress (19%), fatigue (18%), and concentration difficulties (16%) were most common complaints. Complainants related their symptoms most frequently to exposure to mobile phone base stations (74%), followed by mobile phones (36%), cordless phones (29%) and power lines (27%). No distinct symptoms related to a specific field source could be identified. Eighty-five percent of the people who consulted a public authority because of their symptoms were unsatisfied with the response, whereas consultation of self-help groups or building ecologists usually fulfilled expectations. Two thirds of complainants had taken some action to reduce their symptoms. The most common measure was to avoid exposure if possible. Removing or disconnecting indoor sources was judged to be the most effective action.

H. Hutter,  H. Moshammer,  Johannes P. Wallner … (2006)
The erection of mobile telephone base stations in inhabited areas has raised concerns about possible health effects caused by emitted microwaves. In a cross-sectional study of randomly selected inhabitants living in urban and rural areas for more than one year near to 10 selected base stations, 365 subjects were investigated. Several cognitive tests were performed, and wellbeing and sleep quality were assessed. Field strength of high-frequency electromagnetic fields (HF-EMF) was measured in the bedrooms of 336 households. Total HF-EMF and exposure related to mobile telecommunication were far below recommended levels (max. 4.1 mW/m2). Distance from antennae was 24-600 m in the rural area and 20-250 m in the urban area. Average power density was slightly higher in the rural area (0.05 mW/m2) than in the urban area (0.02 mW/m2). Despite the influence of confounding variables, including fear of adverse effects from exposure to HF-EMF from the base station, there was a significant relation of some symptoms to measured power density; this was highest for headaches. Perceptual speed increased, while accuracy decreased insignificantly with increasing exposure levels. There was no significant effect on sleep quality. Despite very low exposure to HF-EMF, effects on wellbeing and performance cannot be ruled out, as shown by recently obtained experimental results; however, mechanisms of action at these low levels are unknown.

Publisher ID: bmjopen-2013-003836
DOI: 10.1136/bmjopen-2013-003836
PMC ID: 3885815
Copyright statement: Published by the BMJ Publishing Group Limited. For permission to use (where not already granted under a licence) please go to http://group.bmj.com/group/rights-licensing/permissions
License: