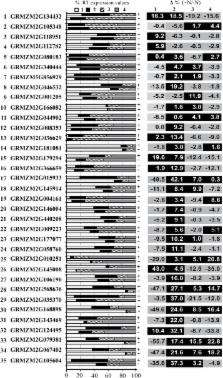 A combined untargeted approach was adopted to achieve a picture of the transcriptional and proteomic profiles typifying the maize root transition zone in response to nitrate.

Nitrate is an essential nutrient for plants, and crops depend on its availability for growth and development, but its presence in agricultural soils is far from stable. In order to overcome nitrate fluctuations in soil, plants have developed adaptive mechanisms allowing them to grow despite changes in external nitrate availability. Nitrate can act as both nutrient and signal, regulating global gene expression in plants, and the root tip has been proposed as the sensory organ. A set of genome-wide studies has demonstrated several nitrate-regulated genes in the roots of many plants, although only a few studies have been carried out on distinct root zones. To unravel new details of the transcriptomic and proteomic responses to nitrate availability in a major food crop, a double untargeted approach was conducted on a transition zone-enriched root portion of maize seedlings subjected to differing nitrate supplies. The results highlighted a complex transcriptomic and proteomic reprogramming that occurs in response to nitrate, emphasizing the role of this root zone in sensing and transducing nitrate signal. Our findings indicated a relationship of nitrate with biosynthesis and signalling of several phytohormones, such as auxin, strigolactones, and brassinosteroids. Moreover, the already hypothesized involvement of nitric oxide in the early response to nitrate was confirmed with the use of nitric oxide inhibitors. Our results also suggested that cytoskeleton activation and cell wall modification occurred in response to nitrate provision in the transition zone.

Atsushi Hanada,  Kohki Akiyama,  Tomotsugu Arite … (2008)
Shoot branching is a major determinant of plant architecture and is highly regulated by endogenous and environmental cues. Two classes of hormones, auxin and cytokinin, have long been known to have an important involvement in controlling shoot branching. Previous studies using a series of mutants with enhanced shoot branching suggested the existence of a third class of hormone(s) that is derived from carotenoids, but its chemical identity has been unknown. Here we show that levels of strigolactones, a group of terpenoid lactones, are significantly reduced in some of the branching mutants. Furthermore, application of strigolactones inhibits shoot branching in these mutants. Strigolactones were previously found in root exudates acting as communication chemicals with parasitic weeds and symbiotic arbuscular mycorrhizal fungi. Thus, we propose that strigolactones act as a new hormone class-or their biosynthetic precursors-in regulating above-ground plant architecture, and also have a function in underground communication with other neighbouring organisms.

CHL1 functions as a nitrate sensor in plants.

Cheng-Hsun Ho,  Shan-Hua Lin,  Heng-Cheng Hu … (2009)
Ions serve as essential nutrients in higher plants and can also act as signaling molecules. Little is known about how plants sense changes in soil nutrient concentrations. Previous studies showed that T101-phosphorylated CHL1 is a high-affinity nitrate transporter, whereas T101-dephosphorylated CHL1 is a low-affinity transporter. In this study, analysis of an uptake- and sensing-decoupled mutant showed that the nitrate transporter CHL1 functions as a nitrate sensor. Primary nitrate responses in CHL1T101D and CHLT101A transgenic plants showed that phosphorylated and dephosphorylated CHL1 lead to a low- and high-level response, respectively. In vitro and in vivo studies showed that, in response to low nitrate concentrations, protein kinase CIPK23 can phosphorylate T101 of CHL1 to maintain a low-level primary response. Thus, CHL1 uses dual-affinity binding and a phosphorylation switch to sense a wide range of nitrate concentrations in the soil, thereby functioning as an ion sensor in higher plants. For a video summary of this article, see the PaperFlick file with the Supplemental Data available online.