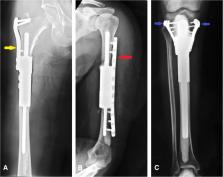 The optimal reconstructive method after diaphyseal malignant bone tumor resection remains controversial. This multicenter clinical study was designed to investigate the clinical value and complications of segmental prosthesis in the repair of diaphyseal defects.

We present 49 patients from three clinical centers treated with wide resection for primary or metastatic bone tumors involving the diaphysis of the femur, tibia, humerus, or ulna, followed by reconstruction using a modular intramedullary segmental prosthesis.

Enrolled patients included 23 men and 26 women with a mean age of 63.3 years. Of these, seven patients had primary bone tumors and 42 patients had metastatic lesions. At the mean follow-up of 13.7 months, 17 patients were alive, 31 patients were deceased due to tumor progression, and one patient was dead of another reason. There were eight nononcologic complications (two with radial nerve injury, three with delayed incision healing, two with aseptic loosening in the proximal humerus prosthetic stem and one with structural failure) and three oncologic complications (three with primary tumor recurrence) among all patients. The incidence of complications in primary tumor patients (4/7, 57.1%) was higher than that in patients with metastatic tumors (7/42, 16.7%) ( p = 0.036). Aseptic loosening and mechanical complications were not common for patients with primary tumors, although the reconstruction length difference was statistically significant ( p = 0.023). No statistically significant differences were observed in limb function, while the mean musculoskeletal tumor society score was 21.2 in femora, 19.6 in humeri, and 17.8 in tibiae ( p = 0.134).

Segmental prostheses represent an optional method for the reconstruction of diaphyseal defects in patients with limited life expectancy. Segmental prostheses in the humerus experienced more complications than those used to treat lesions in the femur.

Francis J. Hornicek,  R Kotz,  Daniel Temple … (2011)
Massive endoprostheses provide orthopaedic oncologists with many reconstructive options after tumor resection, although failure rates are high. Because the number of these procedures is limited, failure of these devices has not been studied or classified adequately. This investigation is a multicenter review of the use of segmental endoprostheses with a focus on the modes, frequency, and timing of failure. Retrospective reviews of the operative databases of five institutions identified 2174 skeletally mature patients who received a large endoprosthesis for tumor resection. Patients who had failure of the endoprosthesis were identified, and the etiology and timing of failure were noted. Similar failures were tabulated and classified on the basis of the risk of amputation and urgency of treatment. Statistical analysis was performed to identify dependent relationships among mode of failure, anatomic location, and failure timing. A literature review was performed, and similar analyses were done for these data. Five hundred and thirty-four failures were identified. Five modes of failure were identified and classified: soft-tissue failures (Type 1), aseptic loosening (Type 2), structural failures (Type 3), infection (Type 4), and tumor progression (Type 5). The most common mode of failure in this series was infection; in the literature, it was aseptic loosening. Statistical dependence was found between anatomic location and mode of failure and between mode of failure and time to failure. Significant differences were found in the incidence of failure mode Types 1, 2, 3, and 4 when polyaxial and uniaxial joints were compared. Significant dependence was also found between failure mode and anatomic location in the literature data. There are five primary modes of endoprosthetic failure, and their relative incidences are significantly different and dependent on anatomic location. Mode of failure and time to failure also show a significant dependence. Because of these relationships, cumulative reporting of segmental failures should be avoided because anatomy-specific trends will be missed. Endoprosthetic design improvements should address failure modes specific to the anatomic location.

Long-term results of allograft replacement in the management of bone tumors.

Nicole Jennings,  C Gebhardt,  Henry J. Mankin … (1996)
Over the past 24 years, the authors have implanted >870 massive frozen cadaveric allografts mostly for the treatment of defects created by the resection of a bone tumor. Most of the grafts were obtained from the authors' institutional bone bank. The results show that only stage and type of graft affected outcome predictably. Specifically, grafts for a Stage 2 or Stage 3 tumor had a poorer outcome than those for Stages 0 and 1. The results for allograft arthrodeses were considerably poorer than osteoarticular, intercalary, and allograft plus prosthesis. The other major factors in results were complications--recurrence, infection, fracture, and nonunion--with the former 2 having a profound negative effect on outcome. After the first year of susceptibility to infection (10%) and the third year of increased risk of fracture (19%), the grafts become stable, and approximately 75% are retained by patients and are considered to be successful for >20 years after implantation. Osteoarthritis becomes a problem at approximately 6 years for osteoarticular grafts, and so far, 16% of the patients with distal femoral, proximal tibial, or proximal femoral grafts have required total joint replacements. Although the current results are adequate, they are imperfect, and research should be directed at improving the results.