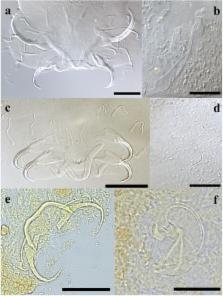 The Lower Congo Basin is characterized by a mangrove-lined estuary at its mouth and, further upstream, by many hydrogeographical barriers such as rapids and narrow gorges. Five localities in the mangroves and four from (upstream) left bank tributaries or pools were sampled. On the gills of Coptodon tholloni, Coptodon rendalli, Hemichromis elongatus, Hemichromis stellifer and Tylochromis praecox, 17 species of parasites (Dactylogyridae & Gyrodactylidae, Monogenea) were found, eight of which are new to science. Six of these are herein described: Cichlidogyrus bixlerzavalai n. sp. and Cichlidogyrus omari n. sp. from T. praecox, Cichlidogyrus calycinus n. sp. and Cichlidogyrus polyenso n. sp. from H. elongatus, Cichlidogyrus kmentovae n. sp. from H. stellifer and Onchobdella ximenae n. sp. from both species of Hemichromis. On Cichlidogyrus reversati a ridge on the accessory piece was discovered that connects to the basal bulb of the penis. We report a putative spillback effect of the native parasites Cichlidogyrus berradae, Cichlidogyrus cubitus and Cichlidogyrus flexicolpos from C. tholloni to the introduced C. rendalli. From our results, we note that the parasite fauna of Lower Congo has a higher affinity with the fauna of West African and nearby freshwater ecoregions than it has with fauna of other regions of the Congo Basin and Central Africa.

Roles of parasites in animal invasions.

John Prenter,  Calum MacNeil,  Jaimie T A Dick … (2004)
Biological invasions are global threats to biodiversity and parasites might play a role in determining invasion outcomes. Transmission of parasites from invading to native species can occur, aiding the invasion process, whilst the 'release' of invaders from parasites can also facilitate invasions. Parasites might also have indirect effects on the outcomes of invasions by mediating a range of competitive and predatory interactions among native and invading species. Although pathogen outbreaks can cause catastrophic species loss with knock-on effects for community structure, it is less clear what impact persistent, sub-lethal parasitism has on native-invader interactions and community structure. Here, we show that the influence of parasitism on the outcomes of animal invasions is more subtle and wide ranging than has been previously realized.

Molecular phylogeny and revised classification of the haplotilapiine cichlid fishes formerly referred to as "Tilapia".

Andreas Dunz,  Ulrich K. Schliewen (2013)
African cichlids formerly referred to as "Tilapia" represent a paraphyletic species assemblage belonging to the so called haplotilapiine lineage which gave rise to the spectacular East African cichlid radiations (EARs) as well as to globally important aquaculture species. We present a comprehensive molecular phylogeny of representative haplotilapiine cichlids, combining in one data set four mitochondrial and five nuclear loci for 76 species, and compare it with phylogenetic information of a second data set of 378 mitochondrial ND2 haplotypes representing almost all important "Tilapia" or Tilapia-related lineages as well as most EAR lineages. The monophyly of haplotilapiines is supported, as is the nested sister group relationship of Etia and mouthbrooding tilapiines with the remaining haplotilapiines. The latter are consistently placed in eight monophyletic clades over all datasets and analyses, but several dichotomous phylogenetic relationships appear compromised by cytonuclear discordant phylogenetic signal. Based on these results as well as on extensive morphological evidence we propose a novel generic and suprageneric classification including a (re-)diagnosis of 20 haplotilapiine cichlid genera and nine tribes. New tribes are provided for the former subgenera Coptodon Gervais, 1853, HeterotilapiaRegan, 1920 and PelmatolapiaThys van den Audenaerde, 1969, in addition for "Tilapia" joka, Tilapia sensu stricto and Chilochromis, Etia, Steatocranus sensu stricto, the mouthbrooding tilapiines and for a clade of West African tilapiines.