Wild edible plants used by communities in and around selected forest reserves of Teso-Karamoja region, Uganda 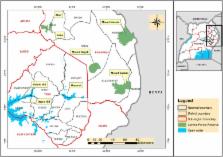 The consumption of wild plants is an ancient tradition which serves multiple purposes. Cognizant that Teso-Karamoja region is frequently affected by food scarcity and is not adequately surveyed for its flora, this study sought to establish an inventory and use of wild edible plants by the communities living in and around the forest reserves.

Data was collected using semi-structured questionnaires administered to 240 respondents living in and around eight forest reserves between November 2017 and May 2018. One focus group discussion (8–12 members) per forest reserve and field excursions to collect the plant voucher specimens were also conducted. The data was analyzed using descriptive statistics, relative frequency of citation (RFC), and the factor of informants’ consensus (FIC).

A total of 100 plant species in 47 families were reported as edible. Carissa spinarum, Strychnos innocua, Balanites aegyptiaca, Tamarindus indica, and Ximenia americana presented the highest RFC, while the families Rubiaceae, Fabaceae, Anacardiaceae, Amaranthaceae, and Moraceae had more than five species each. Grasses (Poaceae) comprised only 1% of the edible species and trees 35%, while shrubs were the most important source of wild food (RFC = 0.47). The fruits contributed 63% while leaves (29%), seeds (9%), tubers (5%), and gum (1%). The fruits were considered as the most important use category (RFC = 0.78). Respondent homogeneity was none for gum but very high for seeds (FIC - 0.93). Only 36% of species are cooked, while 64% are eaten in raw. Harvesting is done rudimentarily by digging (5%), collecting from the ground (fruits that fall down) (13%), and plucking from mother plants (82%). Only 9% of the species were collected throughout the year, 27% in the dry season, and 64% in the rainy season. The consumption of these plants is attributed to food scarcity, spicing staple food, nutri-medicinal value, cultural practice, and delicacy.

A high diversity of wild edible plant species exists in the forest reserves of Teso-Karamoja region. The shrubs and fruits are the most locally important life forms and use category, respectively. These edible plant species are important throughout the year because their consumption serves multiple purposes.

Re-examining hypotheses concerning the use and knowledge of medicinal plants: a study in the Caatinga vegetation of NE Brazil

Ulysses Albuquerque (2006)
Background The Caatinga (dry land vegetation) is one of the most characteristic vegetation types in northeastern Brazil. It occupies a large percentage of the semi-arid region there, and generally supports two major types of economic activity: seasonal agriculture and the harvesting of plant products. However, very little information is available concerning the interaction of people with the plants of the Caatinga. Methods A study was undertaken with the participation of 31 adults from a rural community in the state of Pernambuco, Brazil, in order to analyze the patterns of use of medicinal plant resources, and to test a number of hypotheses concerning their use and local knowledge about them. The sources of medicinal plants used by the local community, the differences in oral information concerning the use of plants with their effective uses, and the role of exotic plants in local folk medicine practices were examined. Results Forty-eight plant species were cited as having medicinal uses, of which 56.25% are native to the Caatinga region. The patterns of harvesting and the importance of these trees and shrubs as medicinal plants seem to be compatible with a hypothesis based on the seasonal availability of plant resources. There is no direct correlation between known medicinal plants and those used by the local population, which agrees with observations made in different tropical regions. However, this observation was not interpreted in terms of the idea of "erosion" of knowledge (commonly used to explain this lack of correlation), but rather to propose two new concepts: "mass knowledge" and "stock knowledge". Conclusion Native plants are a very significant component of locally used medicinal plants, although exotic plants are important for treating specific health problems – which leads the proposal of a hypothesis of diversification.

What Futures for the People of the Tropical Forests?