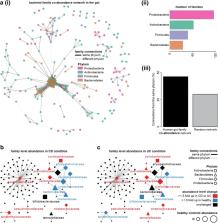 Inflammatory bowel disease (IBD), is a debilitating group of chronic diseases including Crohn’s Disease (CD) and ulcerative colitis (UC), which causes inflammation of the gut and affects millions of people worldwide. At different taxonomic levels, the structure of the gut microbiota is significantly altered in IBD patients compared to that of healthy individuals. However, it is unclear how these IBD-affected bacterial groups are related to other common bacteria in the gut, and how they are connected across different disease conditions at the global scale.

In this study, using faecal samples from patients with IBD, we show through diversity analysis of the microbial community structure based on the 16S rRNA gene that the gut microbiome of IBD patients is less diverse compared to healthy individuals. Furthermore, we have identified which bacterial groups change in abundance in both CD and UC compared to healthy controls. A substantial imbalance was observed across four major bacterial phyla including Firmicutes, Bacteroidetes, Proteobacteria and Actinobacteria, which together constitute > 98% of the gut microbiota. Next, we reconstructed a bacterial family co-abundance network based on the correlation of abundance profiles obtained from the public gut microbiome data of > 22,000 samples of faecal and gut biopsies taken from both diseased and healthy individuals. The data was compiled using the EBI metagenomics database (Mitchell et al. in Nucleic Acids Res 46:D726–D735, 2018). By mapping IBD-altered bacterial families to the network, we show that the bacterial families which exhibit an increased abundance in IBD conditions are not well connected to other groups, implying that these families generally do not coexist together with common gut organisms. Whereas, the bacterial families whose abundance is reduced or did not change in IBD conditions compared to healthy conditions are very well connected to other bacterial groups, suggesting they are highly important groups of bacteria in the gut that can coexist with other bacteria across a range of conditions.

Aleksej Zelezniak,  Sergej Andrejev,  Olga Ponomarova … (2015)
Microbial communities populate most environments on earth and play a critical role in ecology and human health. Their composition is thought to be largely shaped by interspecies competition for the available resources, but cooperative interactions, such as metabolite exchanges, have also been implicated in community assembly. The prevalence of metabolic interactions in microbial communities, however, has remained largely unknown. Here, we systematically survey, by using a genome-scale metabolic modeling approach, the extent of resource competition and metabolic exchanges in over 800 communities. We find that, despite marked resource competition at the level of whole assemblies, microbial communities harbor metabolically interdependent groups that recur across diverse habitats. By enumerating flux-balanced metabolic exchanges in these co-occurring subcommunities we also predict the likely exchanged metabolites, such as amino acids and sugars, that can promote group survival under nutritionally challenging conditions. Our results highlight metabolic dependencies as a major driver of species co-occurrence and hint at cooperative groups as recurring modules of microbial community architecture.

Differences between tissue-associated intestinal microfloras of patients with Crohn's disease and ulcerative colitis.

W. Doolittle,  Uri Gophna,  Marc A G J Ten Dam … (2006)
A leading hypothesis for the role of bacteria in inflammatory bowel diseases is that an imbalance in normal gut flora is a prerequisite for inflammation. Testing this hypothesis requires comparisons between the microbiota compositions of ulcerative colitis and Crohn's disease patients and those of healthy individuals. In this study, we obtained biopsy samples from patients with Crohn's disease and ulcerative colitis and from healthy controls. Bacterial DNA was extracted from the tissue samples, amplified using universal bacterial 16S rRNA gene primers, and cloned into a plasmid vector. Insert-containing colonies were picked for high-throughput sequencing, and sequence data were analyzed, yielding species-level phylogenetic data. The clone libraries yielded 3,305 sequenced clones, representing 151 operational taxonomical units. There was no significant difference between floras from inflamed and healthy tissues from within the same individual. Proteobacteria were significantly (P = 0.0007) increased in Crohn's disease patients, as were Bacteroidetes (P < 0.0001), while Clostridia were decreased in that group (P < 0.0001) in comparison with the healthy and ulcerative colitis groups, which displayed no significant differences. Thus, the bacterial flora composition of Crohn's patients appears to be significantly altered from that of healthy controls, unlike that of ulcerative colitis patients. Imbalance in flora in Crohn's disease is probably not sufficient to cause inflammation, since microbiotas from inflamed and noninflamed tissues were of similar compositions within the same individual.