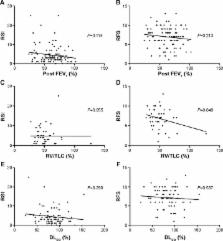 Prospective cohorts were established among 118 patients with COPD from March 2013 to July 2014. Thirty-two age-matched and sex-matched normal controls, who had routine health check-ups during the study period, were included. Laryngopharyngeal reflux finding scores (RFS) and reflux symptom index (RSI) for LPR were subjected to association analysis with severity and acute exacerbation of COPD during the 1-year follow-up.

The mean age of patients enrolled in the study was 69.2±8.8 years, with 93.2% being male. Positive RFS (>7) and RSI (>13) were observed in 51 (42.5%) and six patients (5.0%), respectively. RFS and RSI were significantly higher in patients with COPD than in normal, healthy patients ( P<0.001). RFS was significantly correlated with residual volume/total lung capacity (%, P=0.048). Scores for diffuse laryngeal edema, erythema, and hyperemia were significantly higher in the high-risk group (Global Initiative for Chronic Obstructive Lung Disease classification C and D; P=0.025 and P=0.049, respectively), while RSI was significantly higher in the more symptomatic group (Global Initiative for Chronic Obstructive Lung Disease classification B and D; P=0.047). RSI and RFS were significant predictors for severe acute exacerbation of COPD ( P=0.03 and P=0.047, respectively), while only RSI was associated with severity of dyspnea.

Laryngeal examination and evaluation of laryngeal reflux symptom could be a surrogate clinical indicator related to severe acute exacerbation of COPD. Further studies of LPR in COPD patients should be considered.

The otolaryngologic manifestations of gastroesophageal reflux disease (GERD): a clinical investigation of 225 patients using ambulatory 24-hour pH monitoring and an experimental investigation of the role of acid and pepsin in the development of laryngeal injury.

J Koufman (1991)
Occult (silent) gastroesophageal reflux disease (GER, GERD) is believed to be an important etiologic factor in the development of many inflammatory and neoplastic disorders of the upper aerodigestive tract. In order ot test this hypothesis, a human study and an animal study were performed. The human study consisted primarily of applying a new diagnostic technique (double-probe pH monitoring) to a population of otolaryngology patients with GERD to determine the incidence of overt and occult GERD. The animal study consisted of experiments to evaluate the potential damaging effects of intermittent GER on the larynx. Two hundred twenty-five consecutive patients with otolaryngologic disorders having suspected GERD evaluated from 1985 through 1988 are reported. Ambulatory 24-hour intraesophageal pH monitoring was performed in 197; of those, 81% underwent double-probe pH monitoring, with the second pH probe being placed in the hypopharynx at the laryngeal inlet. Seventy percent of the patients also underwent barium esophagography with videofluoroscopy. The patient population was divided into seven diagnostic subgroups: carcinoma of the larynx (n = 31), laryngeal and tracheal stenosis (n = 33), reflux laryngitis (n = 61), globus pharyngeus (n = 27), dysphagia (n = 25), chronic cough (n = 30), and a group with miscellaneous disorders (n = 18). The most common symptoms were hoarseness (71%), cough (51%), globus (47%), and throat clearing (42%). Only 43% of the patients had gastrointestinal symptoms (heartburn or acid regurgitation). Thus, by traditional symptomatology, GER was occult or silent in the majority of the study population. Twenty-eight patients (12%) refused or could not tolerate pH monitoring. Of the patients undergoing diagnostic pH monitoring, 62% had abnormal esophageal pH studies, and 30% demonstrated reflux into the pharynx. The results of diagnostic pH monitoring for each of the subgroups were as follows (percentage with abnormal studies): carcinoma (71%), stenosis (78%), reflux laryngitis (60%), globus (58%), dysphagia (45%), chronic cough (52%), and miscellaneous (13%). The highest yield of abnormal pharyngeal reflux was in the carcinoma group and the stenosis group (58% and 56%, respectively). By comparison, the diagnostic barium esophagogram with videofluoroscopy was frequently negative. The results were as follows: esophagitis (18%), reflux (9%), esophageal dysmotility (12%), and stricture (3%). All of the study patients were treated with antireflux therapy. Follow-up was available on 68% of the patients and the mean follow-up period was 11.6 +/- 12.7 months.(ABSTRACT TRUNCATED AT 400 WORDS)

Role of gastroesophageal reflux symptoms in exacerbations of COPD.

N Stanley Nahman,  Mark Pamer,  L Lambiase … (2006)
The impact of gastroesophageal reflux disease (GERD) on exacerbations of COPD has never been evaluated. The aims of this investigation were to determine the prevalence of gastroesophageal reflux (GER) symptoms in COPD patients and the effect of GER on the rate of exacerbations of COPD per year. A questionnaire-based, cross sectional survey was performed. Subjects were recruited from the outpatient pulmonary clinics at the University of Florida Health Science Center/Jacksonville. Included patients had an established diagnosis of COPD. Exclusion criteria were respiratory disorders other than COPD, known esophageal disease, active peptic ulcer disease, Zollinger-Ellison syndrome, mastocytosis, scleroderma, and current alcohol abuse. Those meeting criteria and agreeing to participate were asked to complete the Mayo Clinic GERD questionnaire by either personal/telephone interview. Clinically significant reflux was defined as heartburn and/or acid regurgitation weekly. Other outcome measures noted were frequency and type of COPD exacerbations. Statistical analysis was performed using the Fisher exact test for categorical data and the independent t test for interval data. Eighty-six patients were enrolled and interviewed (mean age, 67.5 years). Male patients accounted for 55% of the study group. Overall, 37% of patients reported GER symptoms. The mean FEV(1) percentage of predicted was similar in those with or without GER. The rate of exacerbations of COPD was twice as high in patients with GER symptoms compared to those without GER symptoms (3.2/yr vs 1.6/yr, p = 0.02). The presence of GER symptoms appears to be associated with increased exacerbations of COPD.