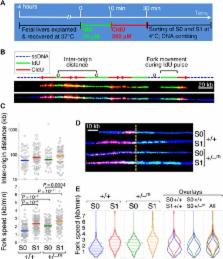 The switch from self-renewal to differentiation coincides with a shorter S phase in which replication forks are faster.

Cell cycle regulators are increasingly implicated in cell fate decisions, such as the acquisition or loss of pluripotency and self-renewal potential. The cell cycle mechanisms that regulate these cell fate decisions are largely unknown. We studied an S phase–dependent cell fate switch, in which murine early erythroid progenitors transition in vivo from a self-renewal state into a phase of active erythroid gene transcription and concurrent maturational cell divisions. We found that progenitors are dependent on p57 KIP2-mediated slowing of replication forks for self-renewal, a novel function for cyclin-dependent kinase inhibitors. The switch to differentiation entails rapid down-regulation of p57 KIP2 with a consequent global increase in replication fork speed and an abruptly shorter S phase. Our work suggests that cell cycles with specialized global DNA replication dynamics are integral to the maintenance of specific cell states and to cell fate decisions.

Biochemical and cellular effects of roscovitine, a potent and selective inhibitor of the cyclin-dependent kinases cdc2, cdk2 and cdk5.

J. Blow,  O Mulner,  Masaki Inagaki … (1997)
Cyclin-dependent kinases (cdk) play an essential role in the intracellular control of the cell division cycle (cdc). These kinases and their regulators are frequently deregulated in human tumours. Enzymatic screening has recently led to the discovery of specific inhibitors of cyclin-dependent kinases, such as butyrolactone I, flavopiridol and the purine olomoucine. Among a series of C2, N6, N9-substituted adenines tested on purified cdc2/cyclin B, 2-(1-ethyl-2-hydroxyethylamino)-6-benzylamino-9-isopropylpurine (roscovitine) displays high efficiency and high selectivity towards some cyclin-dependent kinases. The kinase specificity of roscovitine was investigated with 25 highly purified kinases (including protein kinase A, G and C isoforms, myosin light-chain kinase, casein kinase 2, insulin receptor tyrosine kinase, c-src, v-abl). Most kinases are not significantly inhibited by roscovitine. cdc2/cyclin B, cdk2/cyclin A, cdk2/cyclin E and cdk5/p35 only are substantially inhibited (IC50 values of 0.65, 0.7, 0.7 and 0.2 microM, respectively). cdk4/cyclin D1 and cdk6/cyclin D2 are very poorly inhibited by roscovitine (IC50 > 100 microM). Extracellular regulated kinases erk1 and erk2 are inhibited with an IC50 of 34 microM and 14 microM, respectively. Roscovitine reversibly arrests starfish oocytes and sea urchin embryos in late prophase. Roscovitine inhibits in vitro M-phase-promoting factor activity and in vitro DNA synthesis in Xenopus egg extracts. It blocks progesterone-induced oocyte maturation of Xenopus oocytes and in vivo phosphorylation of the elongation factor eEF-1. Roscovitine inhibits the proliferation of mammalian cell lines with an average IC50 of 16 microM. In the presence of roscovitine L1210 cells arrest in G1 and accumulate in G2. In vivo phosphorylation of vimentin on Ser55 by cdc2/cyclin B is inhibited by roscovitine. Through its unique selectivity for some cyclin-dependent kinases, roscovitine provides a useful antimitotic reagent for cell cycle studies and may prove interesting to control cells with deregulated cdc2, cdk2 or cdk5 kinase activities.