Diversity and comparative genomics of chimeric viruses in Sphagnum-dominated peatlands 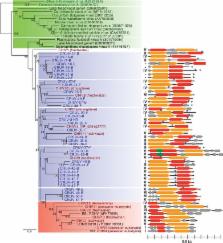 A new group of viruses carrying naturally chimeric single-stranded (ss) DNA genomes that encompass genes derived from eukaryotic ssRNA and ssDNA viruses has been recently identified by metagenomic studies. The host range, genomic diversity, and abundance of these chimeric viruses, referred to as cruciviruses, remain largely unknown. In this article, we assembled and analyzed thirty-seven new crucivirus genomes from twelve peat viromes, representing twenty-four distinct genome organizations, and nearly tripling the number of available genomes for this group. All genomes possess the two characteristic genes encoding for the conserved capsid protein (CP) and a replication protein. Additional ORFs were conserved only in nearly identical genomes with no detectable similarity to known genes. Two cruciviruses possess putative introns in their replication-associated genes. Sequence and phylogenetic analyses of the replication proteins revealed intra-gene chimerism in at least eight chimeric genomes. This highlights the large extent of horizontal gene transfer and recombination events in the evolution of ssDNA viruses, as previously suggested. Read mapping analysis revealed that members of the ‘Cruciviridae’ group are particularly prevalent in peat viromes. Sequences matching the CP ranged from 0.6 up to 10.9 percent in the twelve peat viromes. In contrast, from sixty-nine available viromes derived from other environments, only twenty-four contained cruciviruses, which on average accounted for merely 0.2 percent of sequences. Overall, this study provides new genome information and insights into the diversity of chimeric viruses, a necessary first step in progressing toward an accurate quantification and host range identification of these new viruses.

Gangolf Jobb, Arndt von Haeseler, Korbinian Strimmer (2004)
Background Most analysis programs for inferring molecular phylogenies are difficult to use, in particular for researchers with little programming experience. Results TREEFINDER is an easy-to-use integrative platform-independent analysis environment for molecular phylogenetics. In this paper the main features of TREEFINDER (version of April 2004) are described. TREEFINDER is written in ANSI C and Java and implements powerful statistical approaches for inferring gene tree and related analyzes. In addition, it provides a user-friendly graphical interface and a phylogenetic programming language. Conclusions TREEFINDER is a versatile framework for analyzing phylogenetic data across different platforms that is suited both for exploratory as well as advanced studies.

Kyoung-Ho Kim, Jin-Woo Bae (2011)
Investigation of viruses in the environment often requires the amplification of viral DNA before sequencing of viral metagenomes. In this study, two of the most widely used amplification methods, the linker amplified shotgun library (LASL) and multiple displacement amplification (MDA) methods, were applied to a sample from the seawater surface. Viral DNA was extracted from viruses concentrated by tangential flow filtration and amplified by these two methods. 454 pyrosequencing was used to read the metagenomic sequences from different libraries. The resulting taxonomic classifications of the viruses, their functional assignments, and assembly patterns differed substantially depending on the amplification method. Only double-stranded DNA viruses were retrieved from the LASL, whereas most sequences in the MDA library were from single-stranded DNA viruses, and double-stranded DNA viral sequences were minorities. Thus, the two amplification methods reveal different aspects of viral diversity.