Active commuting in Swedish workers between 1998 and 2015—Trends, characteristics, and cardiovascular disease risk 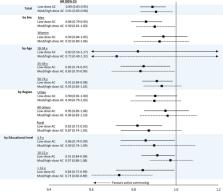 Trend analyses of active commuting and potential variations in trends and association with cardiovascular disease (CVD) risk within subgroups are unknown.

To (a) describe trends in active commuting between 1998 and 2015 and (b) to study the association between different amounts of active commuting and the incidence risk of CVD in a large sample of Swedish workers, and analyses of potential variations across subgroups of socio‐demographics, physical activity, and BMI.

A total of 318 309 participants (47% women, 18‐74 years) who participated in a nationwide occupational health service screening between 1998 and 2015 were included. Commuting habits were self‐reported, and data on first‐time CVD events were derived from national registers.

Self‐reported passive commuters decreased between 1998 and 2015 (64% to 56%), transferring to an increase in mainly moderate/high‐dose active commuters (12% to 19%). Changes were seen in all subgroups. The characteristics and lifestyle habits of the typical passive and active commuter changed little over the study period. Low‐ and moderate/high‐dose active commuters had significantly decreased risks for a first time CVD during follow‐up. This was accentuated in men, middle‐aged, and in participants with light physical work situations, irregular exercise habits, being overweight/obese, and with low fitness.

Increases in active commuting were observed between 1998 and 2015, however still leaving a majority who do not actively commute. As active commuting, regardless dose, is associated with a lower CVD risk, encouraging more people to actively commute may provide an easily accessible and time‐efficient possibility to increase physical activity and health in the general population.

Effect of physical inactivity on major non-communicable diseases worldwide: an analysis of burden of disease and life expectancy.

I-Min Lee,  Eric Shiroma,  Felipe Lobelo … (2012)
Strong evidence shows that physical inactivity increases the risk of many adverse health conditions, including major non-communicable diseases such as coronary heart disease, type 2 diabetes, and breast and colon cancers, and shortens life expectancy. Because much of the world's population is inactive, this link presents a major public health issue. We aimed to quantify the eff ect of physical inactivity on these major non-communicable diseases by estimating how much disease could be averted if inactive people were to become active and to estimate gain in life expectancy at the population level. For our analysis of burden of disease, we calculated population attributable fractions (PAFs) associated with physical inactivity using conservative assumptions for each of the major non-communicable diseases, by country, to estimate how much disease could be averted if physical inactivity were eliminated. We used life-table analysis to estimate gains in life expectancy of the population. Worldwide, we estimate that physical inactivity causes 6% (ranging from 3·2% in southeast Asia to 7·8% in the eastern Mediterranean region) of the burden of disease from coronary heart disease, 7% (3·9-9·6) of type 2 diabetes, 10% (5·6-14·1) of breast cancer, and 10% (5·7-13·8) of colon cancer. Inactivity causes 9% (range 5·1-12·5) of premature mortality, or more than 5·3 million of the 57 million deaths that occurred worldwide in 2008. If inactivity were not eliminated, but decreased instead by 10% or 25%, more than 533 000 and more than 1·3 million deaths, respectively, could be averted every year. We estimated that elimination of physical inactivity would increase the life expectancy of the world's population by 0·68 (range 0·41-0·95) years. Physical inactivity has a major health eff ect worldwide. Decrease in or removal of this unhealthy behaviour could improve health substantially. None.

Ralph Paffenbarger,  Robert Hyde,  Alvin L. Wing … (1986)
We examined the physical activity and other life-style characteristics of 16,936 Harvard alumni, aged 35 to 74, for relations to rates of mortality from all causes and for influences on length of life. A total of 1413 alumni died during 12 to 16 years of follow-up (1962 to 1978). Exercise reported as walking, stair climbing, and sports play related inversely to total mortality, primarily to death due to cardiovascular or respiratory causes. Death rates declined steadily as energy expended on such activity increased from less than 500 to 3500 kcal per week, beyond which rates increased slightly. Rates were one quarter to one third lower among alumni expending 2000 or more kcal during exercise per week than among less active men. With or without consideration of hypertension, cigarette smoking, extremes or gains in body weight, or early parental death, alumni mortality rates were significantly lower among the physically active. Relative risks of death for individuals were highest among cigarette smokers and men with hypertension, and attributable risks in the community were highest among smokers and sedentary men. By the age of 80, the amount of additional life attributable to adequate exercise, as compared with sedentariness, was one to more than two years.