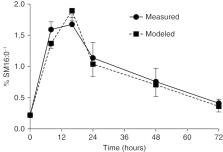 J G Weg, Edward Pattishall, F Lemaire … (1996)
Patients with acute respiratory distress syndrome (ARDS) have a deficiency of surfactant. Surfactant replacement improves physiologic function in such patients, and preliminary data suggest that it may improve survival. We conducted a prospective, multicenter, double-blind, randomized, placebo-controlled trial involving 725 patients with sepsis-induced ARDS. Patients were stratified according to the risk of death at base line (indicated by their score on the Acute Physiological and Chronic Health Evaluation [APACHE III] index) and randomly assigned to receive either continuously administered synthetic surfactant (13.5 mg of dipalmitoylphosphatidylcholine per milliliter, 364 patients) or placebo (o.45 percent saline; 361 patients) in aerosolized form for up to five days. The demographic and physiologic characteristics of the two treatment groups were similar at base line. The mean (+/- SD) age was 50 +/- 17 years in the surfactant group and 53 +/- 18 years in the placebo group, and the mean APACHE III scores at randomization were 70.4 +/- 25 and 70.5 +/- 25, respectively. Hemodynamic measures, measures of oxygenation, duration of mechanical ventilation, and length of stay in intensive care unit did not differ significantly in the two groups. Survival at 30 days was 60 percent for both groups. Survival was similar in the groups when analyzed according to APACHE III score, cause of death, time of onset and severity of ARDS, presence or absence of documented sepsis, underlying disease, whether or not there was a do-not-resuscitate order, and medical center. Increased secretions were significantly more frequent in the surfactant group; the rates of other complications were similar in the two groups. The continuous administration of aerosolized synthetic surfactant to patients with sepsis-induced ARDS had no significant effect on 30-day survival, length of stay in the intensive care unit, duration of mechanical ventilation, or physiologic function.

Thoughts on the alveolar phase of COVID-19

Robert J Mason (2020)
COVID-19 can be divided into three clinical stages, and one can speculate that these stages correlate with where the infection resides. For the asymptomatic phase, the infection mostly resides in the nose, where it elicits a minimal innate immune response. For the mildly symptomatic phase, the infection is mostly in the pseudostratified epithelium of the larger airways and is accompanied by a more vigorous innate immune response. In the conducting airways, the epithelium can recover from the infection, because the keratin 5 basal cells are spared and they are the progenitor cells for the bronchial epithelium. There may be more severe disease in the bronchioles, where the club cells are likely infected. The devastating third phase is in the gas exchange units of the lung, where ACE2-expressing alveolar type II cells and perhaps type I cells are infected. The loss of type II cells results in respiratory insufficiency due to the loss of pulmonary surfactant, alveolar flooding, and possible loss of normal repair, since type II cells are the progenitors of type I cells. The loss of type I and type II cells will also block normal active resorption of alveolar fluid. Subsequent endothelial damage leads to transudation of plasma proteins, formation of hyaline membranes, and an inflammatory exudate, characteristic of ARDS. Repair might be normal, but if the type II cells are severely damaged alternative pathways for epithelial repair may be activated, which would result in some residual lung disease.

Exogenous surfactant may improve oxygenation but not mortality in adult patients with acute lung injury/acute respiratory distress syndrome: a meta-analysis of 9 clinical trials.

Quan Li, Ying Sun, Shukun Fu … (2012)
To evaluate whether exogenous surfactant therapy may be useful in adult patients with acute lung injury or acute respiratory distress syndrome, using a meta-analysis of published clinical trials. A comprehensive literature search was performed to identify all randomized clinical trials examining the effects of the treatment of acute lung injury/acute respiratory distress syndrome with exogenous surfactant in adults. The primary outcome measurement was mortality 28 or 30 days after randomization. Secondary outcome measurements included a change in the ratio of the partial pressure of arterial oxygen to the fraction of inspired oxygen in the first 24 hours or after 120 hours, the number of ventilation-free days, and any adverse effects. The meta-analysis was performed using the Review Manager 5.0.0 system. Randomized clinical trials. Meta-analysis of 9 trials. Nine trials involving 2,575 patients were included in the meta-analysis. The analysis showed that treatment with exogenous pulmonary surfactant does not decrease mortality significantly. There was a significant effect of exogenous surfactant treatment on the change in the partial pressure of arterial oxygen/fraction of inspired oxygen ratio in the first 24 hours but this was lost by 120 hours. The duration of ventilation trended lower in surfactant-treated patients but this was not significant. In addition, surfactant-treated patients had a significantly higher risk of adverse effects. An exogenous surfactant may improve oxygenation over the first 24 hours after administration. However, treatment does not improve mortality and oxygenation over ≥120 hours after administration and results in a high rate of adverse effects. Therefore, the present data suggest that an exogenous surfactant cannot be considered an effective adjunctive therapy in patients with acute lung injury/acute respiratory distress syndrome. Copyright © 2012 Elsevier Inc. All rights reserved.

This article is open access and distributed under the terms of the Creative Commons Attribution 4.0 International License.