Best Practices in Dengue Surveillance: A Report from the Asia-Pacific and Americas Dengue Prevention Boards 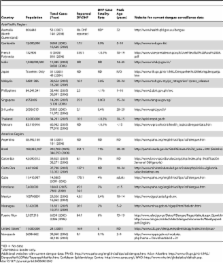 Dengue fever is a virus infection that is spread by the Aedes aegypti mosquito and can cause severe disease especially in children. Dengue fever is a major problem in tropical and sub-tropical regions of the world.

We invited dengue experts from around the world to attend meetings to discuss dengue surveillance. We reviewed literature, heard detailed reports on surveillance programs, and shared expert opinions.

The experts provided recommendations for achieving the best possible data from dengue surveillance accepting the realities of the real world (e.g., limited funding and staff). Their recommendations included: (1) Every dengue endemic country should make reporting of dengue cases to the government mandatory; (2) electronic reporting systems should be developed and used; (3) at minimum dengue surveillance data should include incidence, hospitalization rates, deaths by age group; (4) additional studies should be completed to check the sensitivity of the system; (5) laboratories should share expertise and data; (6) tests that identify dengue virus should be used in patients with fever for four days or less and antibody tests should be used after day 4 to diagnose dengue; and (7) early detection and prediction of dengue outbreaks should be goals for national surveillance systems.

The Pediatric Dengue Vaccine Initiative organized Dengue Prevention Boards in the Asia-Pacific and the Americas regions consisting of dengue experts from endemic countries. Both Boards convened meetings to review issues in surveillance. Through presentations, facilitated discussions, and surveys, the Boards identified best practices in dengue surveillance including: (1) Dengue should be a notifiable disease in endemic countries; (2) World Health Organization regional case definitions should be consistently applied; (3) electronic reporting systems should be developed and used broadly to speed delivery of data to stakeholders; (4) minimum reporting should include incidence rates of dengue fever, dengue hemorrhagic fever, dengue shock syndrome, and dengue deaths, and hospitalization and mortality rates should be reported by age group; (5) periodic additional studies (e.g., capture/recapture) should be conducted to assess under-detection, under-reporting, and the quality of surveillance; (6) laboratory methods and protocols should be standardized; (7) national authorities should encourage laboratories to develop networks to share expertise and data; and (8) RT-PCR and virus isolation (and possibly detection of the NS1 protein) are the recommended methods for confirmation of an acute dengue infection, but are recommended only for the four days after onset of fever—after day 4, IgM-capture enzyme-linked immunosorbent assay is recommended.

The global emergence/resurgence of arboviral diseases as public health problems.

Duane J. Gubler (2015)
During the past 20 years there has been a dramatic resurgence or emergence of epidemic arboviral diseases affecting both humans and domestic animals. These epidemics have been caused primarily by viruses thought to be under control such as dengue, Japanese encephalitis, yellow fever, and Venezuelan equine encephalitis, or viruses that have expanded their geographic distribution such as West Nile and Rift Valley fever. Several of these viruses are presented as case studies to illustrate the changing epidemiology. The factors responsible for the dramatic resurgence of arboviral diseases in the waning years of the 20th century are discussed, as is the need for rebuilding the public health infrastructure to deal with epidemic vector-borne diseases in the 21st century.

The Japanese experience with vaccinating schoolchildren against influenza.

Effect of introduction of the pneumococcal conjugate vaccine on drug-resistant Streptococcus pneumoniae.

¶ Membership of The Asia-Pacific and Americas Dengue Prevention Boards Surveillance Working Group is provided in the Acknowledgments.