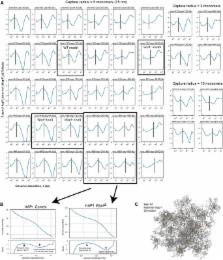 Fertilization triggers assembly of higher‐order chromatin structure from a condensed maternal and a naïve paternal genome to generate a totipotent embryo. Chromatin loops and domains have been detected in mouse zygotes by single‐nucleus Hi‐C (snHi‐C), but not bulk Hi‐C. It is therefore unclear when and how embryonic chromatin conformations are assembled. Here, we investigated whether a mechanism of cohesin‐dependent loop extrusion generates higher‐order chromatin structures within the one‐cell embryo. Using snHi‐C of mouse knockout embryos, we demonstrate that the zygotic genome folds into loops and domains that critically depend on Scc1‐cohesin and that are regulated in size and linear density by Wapl. Remarkably, we discovered distinct effects on maternal and paternal chromatin loop sizes, likely reflecting differences in loop extrusion dynamics and epigenetic reprogramming. Dynamic polymer models of chromosomes reproduce changes in snHi‐C, suggesting a mechanism where cohesin locally compacts chromatin by active loop extrusion, whose processivity is controlled by Wapl. Our simulations and experimental data provide evidence that cohesin‐dependent loop extrusion organizes mammalian genomes over multiple scales from the one‐cell embryo onward.

Yuhua Sun,  Job Dekker,  Christine C. Guo … (2013)
Understanding the topological configurations of chromatin may reveal valuable insights into how the genome and epigenome act in concert to control cell fate during development. Here, we generate high-resolution architecture maps across seven genomic loci in embryonic stem cells and neural progenitor cells. We observe a hierarchy of 3D interactions that undergo marked reorganization at the submegabase scale during differentiation. Distinct combinations of CCCTC-binding factor (CTCF), Mediator, and cohesin show widespread enrichment in chromatin interactions at different length scales. CTCF/cohesin anchor long-range constitutive interactions that might form the topological basis for invariant subdomains. Conversely, Mediator/cohesin bridge short-range enhancer-promoter interactions within and between larger subdomains. Knockdown of Smc1 or Med12 in embryonic stem cells results in disruption of spatial architecture and downregulation of genes found in cohesin-mediated interactions. We conclude that cell-type-specific chromatin organization occurs at the submegabase scale and that architectural proteins shape the genome in hierarchical length scales. Copyright © 2013 Elsevier Inc. All rights reserved.

Erika Schirghuber,  Birgit Koch,  Kazuhide Yahata … (2008)
Cohesin complexes mediate sister-chromatid cohesion in dividing cells but may also contribute to gene regulation in postmitotic cells. How cohesin regulates gene expression is not known. Here we describe cohesin-binding sites in the human genome and show that most of these are associated with the CCCTC-binding factor (CTCF), a zinc-finger protein required for transcriptional insulation. CTCF is dispensable for cohesin loading onto DNA, but is needed to enrich cohesin at specific binding sites. Cohesin enables CTCF to insulate promoters from distant enhancers and controls transcription at the H19/IGF2 (insulin-like growth factor 2) locus. This role of cohesin seems to be independent of its role in cohesion. We propose that cohesin functions as a transcriptional insulator, and speculate that subtle deficiencies in this function contribute to 'cohesinopathies' such as Cornelia de Lange syndrome.

Job Dekker,  Leonid A. Mirny,  Maxim Imakaev … (2013)
Mitotic chromosomes are among the most recognizable structures in the cell, yet for over a century their internal organization remains largely unsolved. We applied chromosome conformation capture methods, 5C and Hi-C, across the cell cycle and revealed two distinct three-dimensional folding states of the human genome. We show that the highly compartmentalized and cell type-specific organization described previously for nonsynchronous cells is restricted to interphase. In metaphase, we identified a homogenous folding state that is locus-independent, common to all chromosomes, and consistent among cell types, suggesting a general principle of metaphase chromosome organization. Using polymer simulations, we found that metaphase Hi-C data are inconsistent with classic hierarchical models and are instead best described by a linearly organized longitudinally compressed array of consecutive chromatin loops.

This is an open access article under the terms of the Creative Commons Attribution 4.0 License, which permits use, distribution and reproduction in any medium, provided the original work is properly cited.