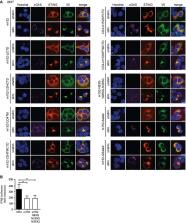 Cytomegaloviruses ( CMVs) are master manipulators of the host immune response. Here, we reveal that the murine CMV ( MCMV) protein m152 specifically targets the type I interferon ( IFN) response by binding to stimulator of interferon genes ( STING), thereby delaying its trafficking to the Golgi compartment from where STING initiates type I IFN signaling. Infection with an MCMV lacking m152 induced elevated type I IFN responses and this leads to reduced viral transcript levels both in vitro and in vivo. This effect is ameliorated in the absence of STING. Interestingly, while m152 inhibits STING‐mediated IRF signaling, it did not affect STING‐mediated NF‐κB signaling. Analysis of how m152 targets STING translocation reveals that STING activates NF‐κB signaling already from the ER prior to its trafficking to the Golgi. Strikingly, this response is important to promote early MCMV replication. Our results show that MCMV has evolved a mechanism to specifically antagonize the STING‐mediated antiviral IFN response, while preserving its pro‐viral NF‐κB response, providing an advantage in the establishment of an infection.

Rongtuan Lin,  Christophe Heylbroeck,  Paula Pitha … (1998)
The interferon regulatory factors (IRF) consist of a growing family of related transcription proteins first identified as regulators of the alpha beta interferon (IFN-alpha/beta) gene promoters, as well as the interferon-stimulated response element (ISRE) of some IFN-stimulated genes. IRF-3 was originally identified as a member of the IRF family based on homology with other IRF family members and on binding to the ISRE of the ISG15 promoter. IRF-3 is expressed constitutively in a variety of tissues, and the relative levels of IRF-3 mRNA do not change in virus-infected or IFN-treated cells. In the present study, we demonstrate that following Sendai virus infection, IRF-3 is posttranslationally modified by protein phosphorylation at multiple serine and threonine residues, which are located in the carboxy terminus of IRF-3. A combination of IRF-3 deletion and point mutations localized the inducible phosphorylation sites to the region -ISNSHPLSLTSDQ- between amino acids 395 and 407; point mutation of residues Ser-396 and Ser-398 eliminated virus-induced phosphorylation of IRF-3 protein, although residues Ser-402, Thr-404, and Ser-405 were also targets. Phosphorylation results in the cytoplasm-to-nucleus translocation of IRF-3, DNA binding, and increased transcriptional activation. Substitution of the Ser-Thr sites with the phosphomimetic Asp generated a constitutively active form of IRF-3 that functioned as a very strong activator of promoters containing PRDI-PRDIII or ISRE regulatory elements. Phosphorylation also appears to represent a signal for virus-mediated degradation, since the virus-induced turnover of IRF-3 was prevented by mutation of the IRF-3 Ser-Thr cluster or by proteasome inhibitors. Interestingly, virus infection resulted in the association of IRF-3 with the CREB binding protein (CBP) coactivator, as detected by coimmunoprecipitation with anti-CBP antibody, an interaction mediated by the C-terminal domains of both proteins. Mutation of residues Ser-396 and Ser-398 in IRF-3 abrogated its binding to CBP. These results are discussed in terms of a model in which virus-inducible, C-terminal phosphorylation of IRF-3 alters protein conformation to permit nuclear translocation, association with transcriptional partners, and primary activation of IFN- and IFN-responsive genes.

Nadia Jeremiah,  Bénédicte Neven,  Matteo Gentili … (2014)
Innate immunity to viral infection involves induction of the type I IFN response; however, dysfunctional regulation of this pathway leads to inappropriate inflammation. Here, we evaluated a nonconsanguineous family of mixed European descent, with 4 members affected by systemic inflammatory and autoimmune conditions, including lupus, with variable clinical expression. We identified a germline dominant gain-of-function mutation in TMEM173, which encodes stimulator of type I IFN gene (STING), in the affected individuals. STING is a key signaling molecule in cytosolic DNA-sensing pathways, and STING activation normally requires dimerization, which is induced by 2'3' cyclic GMP-AMP (cGAMP) produced by the cGAMP synthase in response to cytosolic DNA. Structural modeling supported constitutive activation of the mutant STING protein based on stabilized dimerization. In agreement with the model predictions, we found that the STING mutant spontaneously localizes in the Golgi of patient fibroblasts and is constitutively active in the absence of exogenous 2'3'-cGAMP in vitro. Accordingly, we observed elevated serum IFN activity and a type I IFN signature in peripheral blood from affected family members. These findings highlight the key role of STING in activating both the innate and adaptive immune responses and implicate aberrant STING activation in features of human lupus.

Intracellular localization of Toll-like receptor 9 prevents recognition of self DNA but facilitates access to viral DNA.

Jonathan Kagan,  G Barton,  Ruslan Medzhitov (2005)
Toll-like receptors (TLRs) sense infection by detecting molecular structures of microbial origin. TLR3, TLR7 and TLR9 recognize nucleic acids and are localized to intracellular compartments where they normally respond to viral nucleic acids. The purpose for this intracellular localization, however, is not clear. Here we describe a chimeric TLR9 receptor that localized to the cell surface and responded normally to synthetic TLR9 ligands but not to viral nucleic acids. However, the 'relocated' chimeric TLR9 receptor was able to recognize self DNA, which does not stimulate wild-type TLR9. These data demonstrated that intracellular localization of TLR9 was not required for ligand recognition. Instead, localization of the nucleic acid-sensing TLRs is critical in discriminating between self and nonself nucleic acid.