How Game Location Affects Soccer Performance: T-Pattern Analysis of Attack Actions in Home and Away Matches 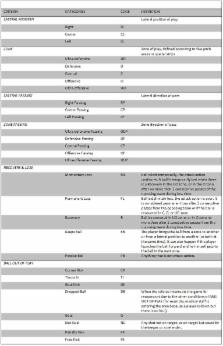 The influence of game location on performance has been widely examined in sport contexts. Concerning soccer, game-location affects positively the secondary and tertiary level of performance; however, there are fewer evidences about its effect on game structure (primary level of performance). This study aimed to detect the effect of game location on a primary level of performance in soccer. In particular, the objective was to reveal the hidden structures underlying the attack actions, in both home and away matches played by a top club (Serie A 2012/2013—First Leg). The methodological approach was based on systematic observation, supported by digital recordings and T-pattern analysis. Data were analyzed with THEME 6.0 software. A quantitative analysis, with nonparametric Mann–Whitney test and descriptive statistics, was carried out to test the hypotheses. A qualitative analysis on complex patterns was performed to get in-depth information on the game structure. This study showed that game tactics were significantly different, with home matches characterized by a more structured and varied game than away matches. In particular, a higher number of different patterns, with a higher level of complexity and including more unique behaviors was detected in home matches than in the away ones. No significant differences were found in the number of events coded per game between the two conditions. THEME software, and the corresponding T-pattern detection algorithm, enhance research opportunities by going further than frequency-based analyses, making this method an effective tool in supporting sport performance analysis and training.

The influence of match location, quality of opposition, and match status on possession strategies in professional association football.

Carlos Lago-Peñas (2009)
The aim of this study was to examine the effects of match location, quality of opposition, and match status on possession strategies in a professional Spanish football team. Twenty-seven matches from the 2005-2006 domestic league season were notated post-event using a computerized match analysis system. Matches were divided into episodes according to evolving match status. Linear regression analysis showed that possession of the ball was greater when losing than when winning (P < 0.01) or drawing (P < 0.05), and playing against strong opposition was associated with a decrease in time spent in possession (P < 0.01). In addition, weighted mean percentage time spent in different zones of the pitch (defensive third, middle third, attacking third) was influenced by match status (P < 0.01) and match location (P < 0.05). A combination of these variables and their interactions can be used to develop a model to predict future possession in football. The findings emphasize the need for match analysts and coaches to consider independent and interactive potential effects of match location, quality of opposition, and match status during assessments of technical and tactical components of football performance. In particular, the findings indicate that strategies in soccer are influenced by match variables and teams alter their playing style during the game accordingly.

The influence of match location, quality of opposition, and match status on technical performance in professional association football.

Nic James,  D Shearer,  Eric Taylor … (2008)
The aim of this study was to examine the effects of match location, quality of opposition, and match status on the technical aspects of performance within a single professional British football team. Forty matches from the 2002--2003 and 2003--2004 domestic league seasons were notated post-event using a computerized notational analysis system with 13 on-the-ball behaviours and corresponding outcomes (successful or unsuccessful) assessed. Log-linear modelling procedures indicated that the incidences of all on-the-ball technical behaviours, with the exception of "set-pieces", were influenced by at least one of the three situation variables, with both independent and interactive effects found. In contrast, logit modelling suggested that there was no general influence of the situation variables on the outcomes of the on-the-ball behaviours. The findings emphasize the need for notational analysts and coaches to consider the potential independent and interactive effects of match location, quality of opposition, and match status when assessing the technical components of football performance, particularly those relating to behaviour occurrence. Future research should consider the effects of additional situation variables purported to influence the mental, physical, technical, and tactical components of football performance.

This article was submitted to Quantitative Psychology and Measurement, a section of the journal Frontiers in Psychology