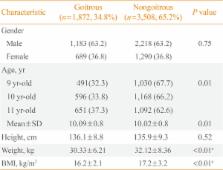 In Iran, an iodine deficiency control program was initiated in 1989 by iodizing salt. Despite this program, goiters have remained an endemic condition in most parts of Iran. Thus, it is possible that other factors aside from iodine deficiency may contribute to endemic goiter. The aim of this study was to investigate the association between cobalt deficiency and endemic goiter in a region of Iran with a high prevalence of goiter.

A cross-sectional study was conducted among school children aged 9 to 11 years in the city of Kerman, Iran. In the first phase of the study, a multistage, proportional-to-size, cluster sampling method was used to screen 5,380 out of 29,787 students. After the screening phase, 170 students (130 goitrous and 40 nongoitrous) were randomly selected, and serum and urine specimens were obtained. We measured thyroid function, serum cobalt level, and urinary iodine excretion. Univariate and multiple logistic regression analyses were performed.

Cobalt deficiency may be an important independent predicator for goiter in endemic regions, especially areas in which goiters persist despite salt iodization programs.

The disorders induced by iodine deficiency.

F Delange (1993)
This paper reviews present knowledge on the etiology, pathophysiology, complications, prevention, and therapy of the disorders induced by iodine deficiency. The recommended dietary allowances of iodine are 100 micrograms/day for adults and adolescents, 60-100 micrograms/day for children aged 1 to 10 years, and 35-40 micrograms/day in infants aged less than 1 year. When the physiological requirements of iodine are not met in a given population, a series of functional and developmental abnormalities occur including thyroid function abnormalities and, when iodine deficiency is severe, endemic goiter and cretinism, endemic mental retardation, decreased fertility rate, increased perinatal death, and infant mortality. These complications, which constitute a hindrance to the development of the affected populations, are grouped under the general heading of iodine deficiency disorders (IDD). At least one billion people are at risk of IDD. Iodine deficiency, therefore, constitutes one of the most common preventable causes of mental deficiency in the world today. Most of the affected populations live in mountainous areas in preindustrialized countries, but 50 to 100 million people are still at risk in Europe. The most important target groups to the effects of iodine deficiency from a public health point of view are pregnant mothers, fetuses, neonates, and young infants because the main complication of IDD, i.e., brain damage resulting in irreversible mental retardation, is the consequence of thyroid failure occurring during pregnancy, fetal, and early postnatal life. The main cause of endemic goiter and cretinism is an insufficient dietary supply of iodine. The additional role of naturally occurring goitrogens has been documented in the case of certain foods (milk, cassava, millet, nuts) and bacterial and chemical water pollutants. The mechanism by which the thyroid gland adapts to an insufficient iodine supply is to increase the trapping of iodide as well as the subsequent steps of the intrathyroidal metabolism of iodine leading to preferential synthesis and secretion of triiodotyronine (T3). They are triggered and maintained by increased secretion of TSH, which is ultimately responsible for the development of goiter. The acceleration of the main steps of iodine kinetics and the degree of hyperstimulation by TSH are much more marked in the pediatric age groups, including neonates, than in adults, and the development of goiter appears as an unfavorable side effect in the process of adaptation to iodine deficiency during growth. The most serious complication of iodine deficiency is endemic cretinism, a syndrome characterized by irreversible mental retardation together with either a predominant neurological syndrome or predominant hypothyroidism, or a combination of both syndromes.(ABSTRACT TRUNCATED AT 400 WORDS)

Sustainability of a well-monitored salt iodization program in Iran: marked reduction in goiter prevalence and eventual normalization of urinary iodine concentrations without alteration in iodine content of salt.

Effects of administration of iron, iodine and simultaneous iron-plus-iodine on the thyroid hormone profile in iron-deficient adolescent Iranian girls.