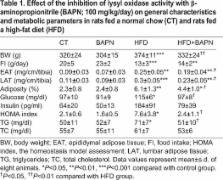 Publisher: The Company of Biologists

Extracellular matrix (ECM) remodelling of the adipose tissue plays a pivotal role in the pathophysiology of obesity. The lysyl oxidase (LOX) family of amine oxidases, including LOX and LOX-like (LOXL) isoenzymes, controls ECM maturation, and upregulation of LOX activity is essential in fibrosis; however, its involvement in adipose tissue dysfunction in obesity is unclear. In this study, we observed that LOX is the main isoenzyme expressed in human adipose tissue and that its expression is strongly upregulated in samples from obese individuals that had been referred to bariatric surgery. LOX expression was also induced in the adipose tissue from male Wistar rats fed a high-fat diet (HFD). Interestingly, treatment with β-aminopropionitrile (BAPN), a specific and irreversible inhibitor of LOX activity, attenuated the increase in body weight and fat mass that was observed in obese animals and shifted adipocyte size toward smaller adipocytes. BAPN also ameliorated the increase in collagen content that was observed in adipose tissue from obese animals and improved several metabolic parameters – it ameliorated glucose and insulin levels, decreased homeostasis model assessment (HOMA) index and reduced plasma triglyceride levels. Furthermore, in white adipose tissue from obese animals, BAPN prevented the downregulation of adiponectin and glucose transporter 4 (GLUT4), as well as the increase in suppressor of cytokine signaling 3 (SOCS3) and dipeptidyl peptidase 4 (DPP4) levels, triggered by the HFD. Likewise, in the TNFα-induced insulin-resistant 3T3-L1 adipocyte model, BAPN prevented the downregulation of adiponectin and GLUT4 and the increase in SOCS3 levels, and consequently normalised insulin-stimulated glucose uptake. Therefore, our data provide evidence that LOX plays a pathologically relevant role in the metabolic dysfunction induced by obesity and emphasise the interest of novel pharmacological interventions that target adipose tissue fibrosis and LOX activity for the clinical management of this disease.

Highlighted Article: Lysyl oxidase (LOX) could play a role in the metabolic dysfunction induced by obesity, and consequently the inhibition of LOX activity could be a valuable strategy to ameliorate obesity-related metabolic disturbances.

I Wernstedt Asterholm,  R Brekken,  Z. Wang … (2009)
Adipose tissue can undergo rapid expansion during times of excess caloric intake. Like a rapidly expanding tumor mass, obese adipose tissue becomes hypoxic due to the inability of the vasculature to keep pace with tissue growth. Consequently, during the early stages of obesity, hypoxic conditions cause an increase in the level of hypoxia-inducible factor 1alpha (HIF1alpha) expression. Using a transgenic model of overexpression of a constitutively active form of HIF1alpha, we determined that HIF1alpha fails to induce the expected proangiogenic response. In contrast, we observed that HIF1alpha initiates adipose tissue fibrosis, with an associated increase in local inflammation. "Trichrome- and picrosirius red-positive streaks," enriched in fibrillar collagens, are a hallmark of adipose tissue suffering from the early stages of hypoxia-induced fibrosis. Lysyl oxidase (LOX) is a transcriptional target of HIF1alpha and acts by cross-linking collagen I and III to form the fibrillar collagen fibers. Inhibition of LOX activity by beta-aminoproprionitrile treatment results in a significant improvement in several metabolic parameters and further reduces local adipose tissue inflammation. Collectively, our observations are consistent with a model in which adipose tissue hypoxia serves as an early upstream initiator for adipose tissue dysfunction by inducing a local state of fibrosis.