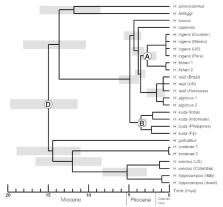 The importance of vicariance events on the establishment of phylogeographic patterns in the marine environment is well documented, and generally accepted as an important cause of cladogenesis. Founder dispersal (i.e. long-distance dispersal followed by founder effect speciation) is also frequently invoked as a cause of genetic divergence among lineages, but its role has long been challenged by vicariance biogeographers. Founder dispersal is likely to be common in species that colonize remote habitats by means of rafting (e.g. seahorses), as long-distance dispersal events are likely to be rare and subsequent additional recruitment from the source habitat is unlikely. In the present study, the relative importance of vicariance and founder dispersal as causes of cladogenesis in a circumglobally distributed seahorse lineage was investigated using molecular dating. A phylogeny was reconstructed using sequence data from mitochondrial and nuclear markers, and the well-documented closure of the Central American seaway was used as a primary calibration point to test whether other bifurcations in the phylogeny could also have been the result of vicariance events. The feasibility of three other vicariance events was explored: a) the closure of the Indonesian Seaway, resulting in sister lineages associated with the Indian Ocean and West Pacific, respectively; b) the closure of the Tethyan Seaway, resulting in sister lineages associated with the Indo-Pacific and Atlantic Ocean, respectively, and c) continental break-up during the Mesozoic followed by spreading of the Atlantic Ocean, resulting in pairs of lineages with amphi-Atlantic distribution patterns.

Comparisons of pairwise genetic distances among the seahorse species hypothesized to have diverged as a result of the closure of the Central American Seaway with those of published teleost sequences having the same distribution patterns show that the seahorses were among the last to diverge. This suggests that their cladogenesis was associated with the final closure of this seaway. Although two other divergence events in the phylogeny could potentially have arisen as a result of the closures of the Indonesian and Tethyan seaways, respectively, the timing of the majority of bifurcations in the phylogeny differed significantly from the dates of vicariance events suggested in the literature. Moreover, several divergence events that resulted in the same distribution patterns of lineages at different positions in the phylogeny did not occur contemporaneously. For that reason, they cannot be the result of the same vicariance events, a result that is independent of molecular dating.

Interpretations of the cladogenetic events in the seahorse phylogeny based purely on vicariance biogeographic hypotheses are problematic. We conclude that the evolution of the circumglobally distributed seahorse lineage was strongly influenced by founder dispersal, and suggest that this mode of speciation may be particularly important in marine organisms that lack a pelagic dispersal phase and instead disperse by means of rafting.

The Ecology of Invasions by Animals and Plants

N Saitou,  M Nei (1988)
A new method called the neighbor-joining method is proposed for reconstructing phylogenetic trees from evolutionary distance data. The principle of this method is to find pairs of operational taxonomic units (OTUs [= neighbors]) that minimize the total branch length at each stage of clustering of OTUs starting with a starlike tree. The branch lengths as well as the topology of a parsimonious tree can quickly be obtained by using this method. Using computer simulation, we studied the efficiency of this method in obtaining the correct unrooted tree in comparison with that of five other tree-making methods: the unweighted pair group method of analysis, Farris's method, Sattath and Tversky's method, Li's method, and Tateno et al.'s modified Farris method. The new, neighbor-joining method and Sattath and Tversky's method are shown to be generally better than the other methods.

A simple method for estimating evolutionary rates of base substitutions through comparative studies of nucleotide sequences.

Motoo Kimura (1980)
Some simple formulae were obtained which enable us to estimate evolutionary distances in terms of the number of nucleotide substitutions (and, also, the evolutionary rates when the divergence times are known). In comparing a pair of nucleotide sequences, we distinguish two types of differences; if homologous sites are occupied by different nucleotide bases but both are purines or both pyrimidines, the difference is called type I (or "transition" type), while, if one of the two is a purine and the other is a pyrimidine, the difference is called type II (or "transversion" type). Letting P and Q be respectively the fractions of nucleotide sites showing type I and type II differences between two sequences compared, then the evolutionary distance per site is K = -(1/2) ln [(1-2P-Q) square root of 1-2Q]. The evolutionary rate per year is then given by k = K/(2T), where T is the time since the divergence of the two sequences. If only the third codon positions are compared, the synonymous component of the evolutionary base substitutions per site is estimated by K'S = -(1/2) ln (1-2P-Q). Also, formulae for standard errors were obtained. Some examples were worked out using reported globin sequences to show that synonymous substitutions occur at much higher rates than amino acid-altering substitutions in evolution.