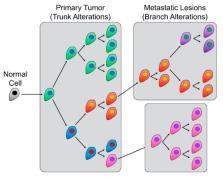 Chromosome instability (CIN) refers to an ongoing rate of chromosomal changes and is a driver of genetic, cell-to-cell heterogeneity. It is an aberrant phenotype that is intimately associated with cancer development and progression. The presence, extent, and level of CIN has tremendous implications for the clinical management and outcomes of those living with cancer. Despite its relevance in cancer, there is still extensive misuse of the term CIN, and this has adversely impacted our ability to identify and characterize the molecular determinants of CIN. Though several decades of genetic research have provided insight into CIN, the molecular determinants remain largely unknown, which severely limits its clinical potential. In this review, we provide a definition of CIN, describe the two main types, and discuss how it differs from aneuploidy. We subsequently detail its impact on cancer development and progression, and describe how it influences metastatic potential with reference to cancer prognosis and outcomes. Finally, we end with a discussion of how CIN induces genetic heterogeneity to influence the use and efficacy of several precision medicine strategies, including patient and risk stratification, as well as its impact on the acquisition of drug resistance and disease recurrence.

Marco Gerlinger,  Andrew J Rowan,  Stuart Horswell … (2012)
Intratumor heterogeneity may foster tumor evolution and adaptation and hinder personalized-medicine strategies that depend on results from single tumor-biopsy samples. To examine intratumor heterogeneity, we performed exome sequencing, chromosome aberration analysis, and ploidy profiling on multiple spatially separated samples obtained from primary renal carcinomas and associated metastatic sites. We characterized the consequences of intratumor heterogeneity using immunohistochemical analysis, mutation functional analysis, and profiling of messenger RNA expression. Phylogenetic reconstruction revealed branched evolutionary tumor growth, with 63 to 69% of all somatic mutations not detectable across every tumor region. Intratumor heterogeneity was observed for a mutation within an autoinhibitory domain of the mammalian target of rapamycin (mTOR) kinase, correlating with S6 and 4EBP phosphorylation in vivo and constitutive activation of mTOR kinase activity in vitro. Mutational intratumor heterogeneity was seen for multiple tumor-suppressor genes converging on loss of function; SETD2, PTEN, and KDM5C underwent multiple distinct and spatially separated inactivating mutations within a single tumor, suggesting convergent phenotypic evolution. Gene-expression signatures of good and poor prognosis were detected in different regions of the same tumor. Allelic composition and ploidy profiling analysis revealed extensive intratumor heterogeneity, with 26 of 30 tumor samples from four tumors harboring divergent allelic-imbalance profiles and with ploidy heterogeneity in two of four tumors. Intratumor heterogeneity can lead to underestimation of the tumor genomics landscape portrayed from single tumor-biopsy samples and may present major challenges to personalized-medicine and biomarker development. Intratumor heterogeneity, associated with heterogeneous protein function, may foster tumor adaptation and therapeutic failure through Darwinian selection. (Funded by the Medical Research Council and others.).