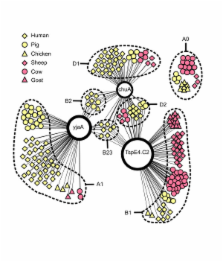 Escherichia coli strains are commonly found in the gut microflora of warm-blooded animals. These strains can be assigned to one of the four main phylogenetic groups, A, B1, B2 and D, which can be divided into seven subgroups (A 0, A 1, B1, B2 2, B2 3, D 1 and D 2), according to the combination of the three genetic markers chuA, yjaA and DNA fragment TspE4.C2. Distinct studies have demonstrated that these phylo-groups differ in the presence of virulence factors, ecological niches and life-history. Therefore, the aim of this work was to analyze the distribution of these E. coli phylo-groups in 94 human strains, 13 chicken strains, 50 cow strains, 16 goat strains, 39 pig strains and 29 sheep strains and to verify the potential of this analysis to investigate the source of fecal contamination.

The results indicated that the distribution of phylogenetic groups, subgroups and genetic markers is non-random in the hosts analyzed. Strains from group B1 were present in all hosts analyzed but were more prevalent in cow, goat and sheep samples. Subgroup B2 3 was only found in human samples. The diversity and the similarity indexes have indicated a similarity between the E. coli population structure of human and pig samples and among cow, goat and sheep samples. Correspondence analysis using contingence tables of subgroups, groups and genetic markers frequencies allowed the visualization of the differences among animal samples and the identification of the animal source of an external validation set. The classifier tools Binary logistic regression and Partial least square -- discriminant analysis, using the genetic markers profile of the strains, differentiated the herbivorous from the omnivorous strains, with an average error rate of 17%.

This is the first work, as far as we are aware, that identifies the major source of fecal contamination of a pool of strains instead of a unique strain. We concluded that the analysis of the E. coli population structure can be useful as a supplementary bacterial source tracking tool.

The Structure of Lizard Communities

R. Selander,  H Ochman (1984)
A set of 72 reference strains of Escherichia coli isolated from a variety of hosts and geographical locations has been established for use in studies of variation and genetic structure in natural populations. The strains, which have been characterized by multilocus enzyme electrophoresis, are representative of the range of genotypic variation in the species as a whole.

M Kuskowski,  Keven R. Johnson,  D. Stell … (2001)
The 72 member strains of the Escherichia coli Reference collection were assessed as to genotype for 31 putative extraintestinal virulence factor (VF) genes and DNA sequence for papA, the P fimbrial structural subunit gene. Although most VFs were concentrated in phylogenetic group B2 or jointly in groups B2 and D, others were concentrated primarily in group D, were broadly distributed (without group-specific associations), and/or occurred only outside of group B2. Statistical correlations among VFs suggested linkage on pathogenicity-associated islands or plasmids. Isolates from humans and nonhuman primates had more VFs than did isolates from other animals. Sequence diversity was minimal within each F type-specific papA allele group but was substantial among different papA allele groups. The distribution patterns of papA variants and other VFs suggested multiple horizontal transfer events. These findings provide new insights into the phylogenetic origins of extraintestinal VFs in E. coli.