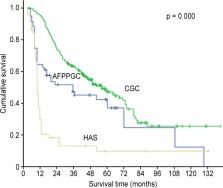 Hepatoid adenocarcinoma of the stomach (HAS) is a rare subgroup of gastric cancer (GC). Morphologically, this tumor exhibits both adenocarcinomatous and hepatocellular differentiation, and most tumors show immunohistochemical staining for alpha-fetoprotein (AFP) or elevated AFP serum levels. The diagnosis of HAS is frequently delayed, and at least half of patients have advanced disease at the time of diagnosis. Despite a lack of evidence, treatment approaches have mostly followed principles for the treatment of common gastric cancer (CGC), including radical surgery in eligible patients with curative intent. The indications for and the type of adjuvant systemic treatments remain unclear. Additionally, there is a lack of evidence allowing any firm conclusions to be drawn regarding the best treatment for patients with metastatic HAS (mHAS). Chemotherapy regimens, including cisplatin-based chemotherapy, are considered the most efficient first-line systemic treatment in advanced situations. Their combination with targeted therapy (i.e., trastuzumab) in HER2-positive tumors seems promising. The rarity of these patients and the scarce and heterogeneous literature on this particular subgroup of GC make it difficult to provide any robust evidence for the clinical management of patients with HAS.

An AFP-producing gastric carcinoma with features of hepatic differentiation. A case report.

Y Akishima-Fukasawa,  M. Aizawa,  H Ishikura … (1985)
A patient with primary gastric adenocarcinoma with extremely high serum alpha-fetoprotein (AFP) levels (12,000 ng/ml) is described. Histologically, foci strongly resembling hepatocellular carcinoma with hyaline globules were noted. Within tumor cells, AFP was identified with both light and electron microscopy, showing the production of AFP by tumor cells themselves. Furthermore, 88% of serum AFP combined with Concanavalin A (ConA), revealing that it was hepatic-type AFP and not germ-cell-type. Localization of alpha-1-antitrypsin within tumor cells was also noted. Ultrastructural study showed that there were two types of structures corresponding to periodic acid-Schiff (PAS)-positive globules, one of which, the proteinaceous material in intracytoplasmic lumina, was found to contain AFP. Among gastric adenocarcinomas with a high serum AFP level (several thousand or more ng/ml of AFP), foci resembling hepatocellular carcinomas have been reported by several investigators. Those gastric carcinomas, together with the current case, may constitute a clinicopathologic entity, hepatoid adenocarcinoma of the stomach.

Hepatoid adenocarcinoma of the stomach. A clinicopathologic and immunohistochemical analysis.

T Ueyama,  E Nagai,  T Yao … (1993)
The clinicopathologic and immunohistochemical features of the primary gastric hepatoid adenocarcinomas still remain unclear. The authors evaluated 28 hepatoid adenocarcinomas (HC) of the stomach on the basis of characteristic histologic features resembling hepatocellular carcinoma, which were selected from the 7200 cases of primary gastric carcinoma in their files. Additionally, 22 alpha-fetoprotein (AFP)-positive adenocarcinomas without hepatoid features (APC) were also selected. The HC cases fell into the following two groups: HC with AFP-positive tumor cells (Group 1; 15 cases) and HC without AFP-positive cells (Group 2; 13 cases). Histologically, the glycogen granules and hyaline globules were common features in HC. The incidence of a venous invasion of HC (Groups 1 and 2) was higher than that of APC (Group 3). There were no significant differences among the three groups regarding clinical features, macroscopic features, and the incidence of lymphatic permeation. An immunohistochemical study showed that HC had differentiation into various directions. As for the advanced carcinomas, the 5-year survival rates of patients with HC (Groups 1 and 2) and those with APC (Group 3) were 11.9% (21.4%, 8.3%) and 38.2%, respectively. The prognosis of Group 1 was similar to that of Group 2, but was poorer than that of Group 3. The findings suggested that HC, as shown by its characteristic histologic features, had a poor prognosis whether producing AFP or not, and that HC should therefore be distinguished from AFP-positive carcinoma without hepatoid features.

Clinicopathological characteristics in the differential diagnosis of hepatoid adenocarcinoma: a literature review.

Jiann-Sheng Su,  Yu-Tso Chen,  Ren-Ching Wang … (2013)
Hepatoid adenocarcinoma (HAC) is a rare but important special type of extrahepatic adenocarcinoma with clinicopathological presentation mimicking hepatocellular carcinoma (HCC), and prompt and correct diagnosis can be a challenge, especially in endemic areas with a high incidence of HCC. To date, HAC has only been reported in case series or single case reports, so we aimed to review the clinicopathological characteristics of HAC to obtain a more complete picture of this rare form of extrahepatic adenocarcinoma. All the articles about HAC published from 2001 to 2011 were reviewed, and clinicopathological findings were extracted for analysis. A late middle-aged male with high serum α-fetoprotein and atypical image finding of HCC should raise the suspicion of HAC, and characteristic pathological immunohistochemical stains can help with the differential diagnosis. Novel immunohistochemical markers may be useful to clearly differentiate HAC from HCC. Once metastatic HAC is diagnosed, the primary tumor origin should be identified for adequate treatment. The majority of HAC originates from the stomach, so panendoscopy should be arranged first.