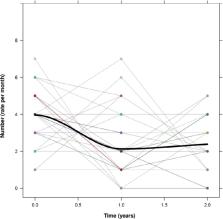 Long-term use of nebulized or oral antibiotics is common in the treatment of cystic fibrosis and non-cystic fibrosis bronchiectasis. To date, however, few studies have focused on the use of nebulized antibiotics in COPD patients. The aims of this study are: to establish whether a combination of nebulized colistin plus continuous cyclic azithromycin in severe COPD patients with chronic bronchial infection due to Pseudomonas aeruginosa reduces the frequency of exacerbations, and to assess the effect of this treatment on microbiological sputum isolates.

A retrospective cohort was created for the analysis of patients with severe COPD and chronic bronchial infection due to P. aeruginosa treated with nebulized colistin at the Respiratory Day Care Unit between 2005 and 2015. The number and characteristics of COPD exacerbations (ECOPD) before and up to two years after the introduction of nebulized colistin treatment were recorded.

We analyzed 32 severe COPD patients who received nebulized colistin for at least three months (median 17 months [IQR 7–24]). All patients but one received combination therapy with continuous cyclic azithromycin (median 24 months [IQR 11–30]). A significant reduction in the number of ECOPD from baseline of 38.3% at two years of follow-up was observed, with a clear decrease in P. aeruginosa ECOPD (from 59.5% to 24.6%) and a P. aeruginosa eradication rate of 28% over the two-year follow-up.

In patients with severe COPD and chronic bronchial infection due to P. aeruginosa, combination therapy with nebulized colistin and continuous cyclic azithromycin significantly reduced the number of ECOPD, with a marked decrease in P. aeruginosa sputum isolates.

Penelope Burns,  Ian Marshall,  A Fieberg … (2003)
Treatment strategies for cystic fibrosis (CF) lung disease include antibiotics, mucolytics, and anti-inflammatory therapies. Increasing evidence suggests that macrolide antibiotics might be beneficial in patients with CF. To determine if an association between azithromycin use and pulmonary function exists in patients with CF. A multicenter, randomized, double-blind, placebo-controlled trial conducted from December 15, 2000, to May 2, 2002, at 23 CF care centers in the United States. Of the 251 screened participants with a diagnosis of CF, 185 (74%) were randomized. Eligibility criteria included age 6 years or older, infection with Pseudomonas aeruginosa for 1 or more years, and a forced expiratory volume in 1 second (FEV1) of 30% or more. Participants were stratified by FEV1 (> or =60% predicted vs or =40 kg) of oral azithromycin 3 days a week for 168 days; placebo group (n = 98) received identically packaged tablets. Change in FEV1 from day 0 to completion of therapy at day 168 and determination of safety. Secondary outcomes included pulmonary exacerbations and weight gain. The azithromycin group had a mean 0.097-L (SD, 0.26) increase in FEV1 at day 168 compared with 0.003 L (SD, 0.23) in the placebo group (mean difference, 0.094 L; 95% confidence interval [CI], 0.023-0.165; P =.009). Nausea occurred in 17% more participants in the azithromycin group (P =.01), diarrhea in 15% more (P =.009), and wheezing in 13% more (P =.007). Participants in the azithromycin group had less risk of experiencing an exacerbation than participants in the placebo group (hazard ratio, 0.65; 95% CI, 0.44-0.95; P =.03) and weighed at the end of the study an average 0.7 kg more than participants receiving placebo (95% CI, 0.1-1.4 kg; P =.02). Azithromycin treatment was associated with improvement in clinically relevant end points and should be considered for patients with CF who are 6 years or older and chronically infected with P aeruginosa.

Relationship between bacterial flora in sputum and functional impairment in patients with acute exacerbations of COPD. Study Group of Bacterial Infection in COPD.

C. Espinosa-Gongora,  J Martos,  Miguel J. Maldonado … (1999)
To investigate the possible relationship between functional respiratory impairment measured by FEV1 and isolation of diverse pathogens in the sputum of patients with exacerbations of COPD. Multicenter, cross-sectional, epidemiologic study. Pneumology units in six secondary or tertiary hospitals in Spain. Ninety-one patients with acute exacerbation of COPD were included. A quantitative sputum culture was performed, and bacterial growth was considered significant only when the germ was isolated at concentrations > 10(6) cfu (> 10(5) for Streptococcus pneumoniae) in samples with 25 leukocytes per low magnification field (x 100). Germs isolated were the following: Haemophilus influenzae (20 cases; 22%), Pseudomonas aeruginosa (14 cases; 15%), S. pneumoniae (9 cases; 10%), Moraxella catarrhalis (8 cases; 9%), other gram-negative bacteria (7 cases; 7%), and non-potentially pathogenic microorganisms (non-PPMs; 33 cases; 36%). P. aeruginosa and H. influenzae were isolated more frequently among the patients with FEV1 50% (p 50% was low, with a predominance of non-PPMs. Low FEV1 and active tobacco smoking are data that should be considered when establishing an empiric antibiotic treatment for exacerbated COPD.