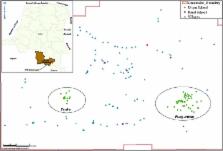 In southern Democratic Republic of the Congo, malaria transmission is stable with seasonal fluctuations. Different measurements can be used to monitor disease burden and estimate the performance of control programmes. Repeated school-based malaria prevalence surveys (SMPS) were conducted from 2007 to 2014 to generate up-to-date surveillance data and evaluate the impact of an integrated vector control programme.

Biannual SMPS used a stratified, randomized and proportional sampling method. Schools were randomly selected from the entire pool of facilities within each Health Area (HA). Subsequently, school-children from 6 to 12 years of age were randomly selected in a proportional manner. Initial point-of-care malaria diagnosis was made using a rapid detection test. A matching stained blood film was later examined by expert microscopy and used in the final analysis. Data was stratified and analysed based on age, survey time and location.

The baseline SMPS (pre-control in 2007) prevalence was approximately 77%. From 2009 to 2014, 11,628 school-children were randomly screened. The mean age was 8.7 years with a near equal sex ratio. After exclusion, analysis of 10,493 students showed an overall malaria prevalence ratio of 1.92 in rural compared to urbanized areas. The distribution of Plasmodium falciparum malaria was significantly different between rural and urban HAs and between end of wet season and end of dry season surveys. The combined prevalence of single P. falciparum, Plasmodium malariae and Plasmodium ovale infections were 29.9, 1.8 and 0.3% of those examined, respectively. Only 1.8% were mixed Plasmodium species infections. From all microscopically detected infections (3545 of 10,493 samples examined), P. falciparum represented 88.5%, followed by P. malariae (5.4%) and P. ovale (0.8%). Cases with multiple species represented 5.3% of patent infections. Malaria prevalence was independent of age and gender. Control programme performance contributed to a significant decrease in mean P. falciparum infection density in urban compared to rural locations. Some rural areas remained highly refractory to control measures (insecticide-treated bed nets, periodic indoor residual spraying).

Vincent Robert,  John Beier,  Jean-François Trape … (2003)
The rapid increase in the world's urban population has major implications for the epidemiology of malaria. A review of malaria transmission in sub-Saharan African cities shows the strong likelihood of transmission occurring within these sprawling cities, whatever the size or characteristics of their bioecologic environment. A meta-analysis of results from studies of malaria transmission in sub-Saharan Africa shows a loose linear negative relationship between mean annual entomologic inoculation rates (EIR) and the level of urbanicity. Few studies have failed to find entomologic evidence of some transmission. Our results show mean annual EIRs of 7.1 in the city centers, 45.8 in periurban areas, and 167.7 in rural areas. The impact of urbanization in reducing transmission is more marked in areas where the mean rainfall is low and seasonal. Considerable variation in the level of transmission exists among cities and within different districts in the same city. This article presents evidence from past literature to build a conceptual framework to begin to explain this heterogeneity. The potential for malaria epidemics owing to decreasing levels of natural immunity may be offset by negative impacts of urbanization on the larval ecology of anopheline mosquitoes. Malaria control in urban environments may be simpler as a result of urbanization; however, much of what we know about malaria transmission in rural environments might not hold in the urban context.