Pathogenesis of and strategies for preventing Edwardsiella tarda infection in fish 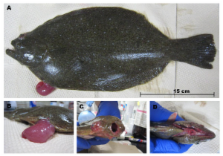 Edwardsiella tarda is one of the serious fish pathogens, infecting both cultured and wild fish species. Research on edwardsiellosis has revealed that E. tarda has a broad host range and geographic distribution, and contains important virulence factors that enhance bacterial survival and pathogenesis in hosts. Although recent progress in edwardsiellosis research has enabled the development of numerous, highly effective vaccine candidates, these efforts have not been translated into a commercialized vaccine. The present review aims to provide an overview of the identification, pathology, diagnosis and virulence factors of E. tarda in fish, and describe recent strategies for developing vaccines against edwardsiellosis. The hope is that this presentation will be useful not only from the standpoint of understanding the pathogenesis of E. tarda, but also from the perspective of facilitating the development of effective vaccines.

Dissection of a type VI secretion system in Edwardsiella tarda.

Gilberto Leung,  Chang-Jun Zheng (2007)
Bacterial pathogens use different protein secretion systems to deliver virulence factors. Recently, a novel secretion system was discovered in several Gram-negative bacterial pathogens, and was designated as the type VI secretion system (T6SS). In Edwardsiella tarda, a partial E. tardavirulent protein (EVP) gene cluster was implicated in protein secretion. Here, we identified the entire EVP cluster as a T6SS and two additional secreted proteins (EvpI, a homologue of VgrG, and EvpP) were found. We systematically mutagenized all the 16 EVP genes and found that the secretion of EvpP was dependent on 13 EVP proteins including EvpC (a homologue of Hcp) and EvpI but not EvpD and EvpJ. All EVP mutants except DeltaevpD were attenuated in blue gourami fish. The 16 EVP proteins can be grouped according to their functions and cellular locations. The first group comprises 11 non-secreted and possibly intracellular apparatus proteins. Among them, EvpO, a putative ATPase which contained a Walker A motif, showed possible interactions with three EVP proteins (EvpA, EvpL and EvpN). The second group includes three secreted proteins (EvpC, EvpI and EvpP). The secretion of EvpC and EvpI is mutually dependent, and they are required for the secretion of EvpP. The interaction between EvpC and EvpP was demonstrated. Lastly, two proteins (EvpD and EvpJ) are not required for the T6SS-dependent secretion.

Qiyao Wang,  Minjun Yang,  Jingfan Xiao … (2009)
Background Edwardsiella tarda is the etiologic agent of edwardsiellosis, a devastating fish disease prevailing in worldwide aquaculture industries. Here we describe the complete genome of E. tarda, EIB202, a highly virulent and multi-drug resistant isolate in China. Methodology/Principal Findings E. tarda EIB202 possesses a single chromosome of 3,760,463 base pairs containing 3,486 predicted protein coding sequences, 8 ribosomal rRNA operons, and 95 tRNA genes, and a 43,703 bp conjugative plasmid harboring multi-drug resistant determinants and encoding type IV A secretion system components. We identified a full spectrum of genetic properties related to its genome plasticity such as repeated sequences, insertion sequences, phage-like proteins, integrases, recombinases and genomic islands. In addition, analysis also indicated that a substantial proportion of the E. tarda genome might be devoted to the growth and survival under diverse conditions including intracellular niches, with a large number of aerobic or anaerobic respiration-associated proteins, signal transduction proteins as well as proteins involved in various stress adaptations. A pool of genes for secretion systems, pili formation, nonfimbrial adhesions, invasions and hemagglutinins, chondroitinases, hemolysins, iron scavenging systems as well as the incomplete flagellar biogenesis might feature its surface structures and pathogenesis in a fish body. Conclusion/Significance Genomic analysis of the bacterium offered insights into the phylogeny, metabolism, drug-resistance, stress adaptation, and virulence characteristics of this versatile pathogen, which constitutes an important first step in understanding the pathogenesis of E. tarda to facilitate construction of a practical effective vaccine used for combating fish edwardsiellosis.

Use of proteomics to identify novel virulence determinants that are required for Edwardsiella tarda pathogenesis.

Yoshiyuki Yamada,  Victoria Tan,  Brian Man-Chun Leung … (2004)
Edwardsiella tarda is an important cause of haemorrhagic septicaemia in fish and also of gastro- and extraintestinal infections in humans. Using a combination of comparative proteomics and TnphoA mutagenesis, we have identified five proteins that may contribute to E. tarda PPD130/91 pathogenesis. Lowered protein secretion, impaired autoaggregation and the absence of six proteins were observed only in three highly attenuated mutants when cultured in Dulbecco's modified eagle medium (DMEM). Five out of six proteins could be identified by their mass spectra. Three proteins were identified as putative effector proteins (EseB, EseC and EseD) that are homologous to SseB, SseC and SseD of a type III secretion system (TTSS) in Salmonella species. The other two were EvpA and EvpC, homologous to Eip20 and Eip18 in Edwardsiella ictaluri. The complete sequencing and homology studies of evpA-H indicate that similar gene clusters are widely distributed in other pathogens such as Escherichia, Salmonella, Vibrio and Yersinia species with unknown functions. Insertional inactivation and deletion of evpB or evpC led to lower replication rates in gourami phagocytes, and reduced protein secretion and virulence in blue gourami. Complementation of these deletion mutants showed partial recovery in the above three phenotypes, indicating that these genes are vital for E. tarda pathogenesis. The transport of the EvpC protein may not use the TTSS in E. tarda. The expression of EvpA and EvpC as well as EseB, EseC and EseD was temperature dependent (suppressed at 37 degrees C), and disruption of esrB affected their expression. The present study identifies two possible secretion systems (TTSS and Evp) that are vital for E. tarda pathogenesis.