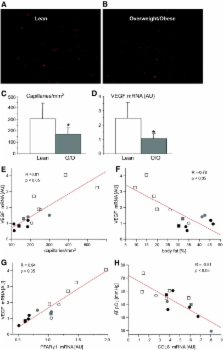 OBJECTIVE— Based on rodent studies, we examined the hypothesis that increased adipose tissue (AT) mass in obesity without an adequate support of vascularization might lead to hypoxia, macrophage infiltration, and inflammation.

RESEARCH DESIGN AND METHODS— Oxygen partial pressure (AT pO 2) and AT temperature in abdominal AT (9 lean and 12 overweight/obese men and women) was measured by direct insertion of a polarographic Clark electrode. Body composition was measured by dual-energy X-ray absorptiometry, and insulin sensitivity was measured by hyperinsulinemic-euglycemic clamp. Abdominal subcutaneous tissue was used for staining, quantitative RT-PCR, and chemokine secretion assay.

RESULTS— AT pO 2 was lower in overweight/obese subjects than lean subjects (47 ± 10.6 vs. 55 ± 9.1 mmHg); however, this level of pO 2 did not activate the classic hypoxia targets (pyruvate dehydrogenase kinase and vascular endothelial growth factor [VEGF]). AT pO 2 was negatively correlated with percent body fat ( R = −0.50, P < 0.05). Compared with lean subjects, overweight/obese subjects had 44% lower capillary density and 58% lower VEGF, suggesting AT rarefaction (capillary drop out). This might be due to lower peroxisome proliferator–activated receptor γ1 and higher collagen VI mRNA expression, which correlated with AT pO 2 ( P < 0.05). Of clinical importance, AT pO 2 negatively correlated with CD68 mRNA and macrophage inflammatory protein 1α secretion ( R = −0.58, R = −0.79, P < 0.05), suggesting that lower AT pO 2 could drive AT inflammation in obesity.

CONCLUSIONS— Adipose tissue rarefaction might lie upstream of both low AT pO 2 and inflammation in obesity. These results suggest novel approaches to treat the dysfunctional AT found in obesity.

Christian R. Andres,  Stephanie J. Tobin,  R. DeFronzo (1979)
Methods for the quantification of beta-cell sensitivity to glucose (hyperglycemic clamp technique) and of tissue sensitivity to insulin (euglycemic insulin clamp technique) are described. Hyperglycemic clamp technique. The plasma glucose concentration is acutely raised to 125 mg/dl above basal levels by a priming infusion of glucose. The desired hyperglycemic plateau is subsequently maintained by adjustment of a variable glucose infusion, based on the negative feedback principle. Because the plasma glucose concentration is held constant, the glucose infusion rate is an index of glucose metabolism. Under these conditions of constant hyperglycemia, the plasma insulin response is biphasic with an early burst of insulin release during the first 6 min followed by a gradually progressive increase in plasma insulin concentration. Euglycemic insulin clamp technique. The plasma insulin concentration is acutely raised and maintained at approximately 100 muU/ml by a prime-continuous infusion of insulin. The plasma glucose concentration is held constant at basal levels by a variable glucose infusion using the negative feedback principle. Under these steady-state conditions of euglycemia, the glucose infusion rate equals glucose uptake by all the tissues in the body and is therefore a measure of tissue sensitivity to exogenous insulin.

Hypoxia is a potential risk factor for chronic inflammation and adiponectin reduction in adipose tissue of ob/ob and dietary obese mice.

Jianping Ye,  Zhanguo Gao,  Jun Yin … (2007)
Chronic inflammation and reduced adiponectin are widely observed in the white adipose tissue in obesity. However, the cause of the changes remains to be identified. In this study, we provide experimental evidence that hypoxia occurs in adipose tissue in obese mice and that adipose hypoxia may contribute to the endocrine alterations. The adipose hypoxia was demonstrated by a reduction in the interstitial partial oxygen pressure (Po(2)), an increase in the hypoxia probe signal, and an elevation in expression of the hypoxia response genes in ob/ob mice. The adipose hypoxia was confirmed in dietary obese mice by expression of hypoxia response genes. In the adipose tissue, hypoxia was associated with an increased expression of inflammatory genes and decreased expression of adiponectin. In dietary obese mice, reduction in body weight by calorie restriction was associated with an improvement of oxygenation and a reduction in inflammation. In cell culture, inflammatory cytokines were induced by hypoxia in primary adipocytes and primary macrophages of lean mice. The transcription factor NF-kappaB and the TNF-alpha gene promoter were activated by hypoxia in 3T3-L1 adipocytes and NIH3T3 fibroblasts. In addition, adiponectin expression was reduced by hypoxia, and the reduction was observed in the gene promoter in adipocytes. These data suggest a potential role of hypoxia in the induction of chronic inflammation and inhibition of adiponectin in the adipose tissue in obesity.

Mechanisms regulating the recruitment of macrophages into hypoxic areas of tumors and other ischemic tissues.

Craig Murdoch,  Athina Giannoudis,  Edwin Lewis (2004)
The mechanisms responsible for recruiting monocytes from the bloodstream into solid tumors are now well characterized. However, recent evidence has shown that these cells then differentiate into macrophages and accumulate in large numbers in avascular and necrotic areas where they are exposed to hypoxia. This parallels their tendency to congregate in ischemic areas of other diseased tissues such as atherosclerotic plaques and arthritic joints. In tumors, macrophages appear to undergo marked phenotypic changes when exposed to hypoxia and to switch on their expression of a number of mitogenic and proangiogenic cytokines and enzymes. This then promotes tumor growth, angiogenesis, and metastasis. Here, we compare the various mechanisms responsible for monocyte recruitment into tumors with those regulating the accumulation of macrophages in hypoxic/necrotic areas. Because the latter are best characterized in human tumors, we focus mainly on these but also discuss their relevance to macrophage migration in ischemic areas of other diseased tissues. Finally, we discuss the relevance of these mechanisms to the development of novel cancer therapies, both in providing targets to reduce the proangiogenic contribution made by hypoxic macrophages in tumors and in developing the use of macrophages to deliver therapeutic gene constructs to hypoxic areas of diseased tissues.