Proposal of a New Type of Innominate Osteotomy without the Use of Bone Graft in Children : A Preliminary Study 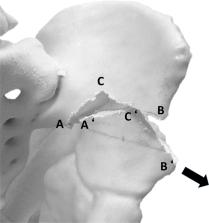 Good long-term outcomes have been reported for the Salter innominate osteotomy (SIO), which is widely used to correct developmental dysplasia of the hip (DDH) in children. In this study, we describe the procedure and early outcomes of a new pelvic osteotomy termed “angulated innominate osteotomy” (AIO).

Twenty-one patients (22 hips) underwent AIO. We evaluated age at the time of surgery, operative time, blood loss, and time to bone union. Several radiographic parameters were assessed preoperatively, immediately postoperatively, and at the time of the latest examination. Measurements were compared with those of 20 previous patients who underwent SIO. The AIO is made to form an isosceles triangle. This enables 2 points of contact between the proximal and distal bone fragments, eliminating the need for a bone graft.

Mean age at the time of surgery was 5.9 years, and the mean duration of follow-up was 30.8 months. The mean operative time was 103 minutes, mean blood loss was 33 mL, and mean time to bone union was 9.8 weeks. Immediately postoperatively, the mean “distance d” (lateral displacement of the distal fragment), mean ratio of the obturator heights (ROH), and mean lateral rotation angle (LRA) were 7.2 mm, 70.4%, and 19.3°, respectively. At the latest examination, the mean acetabular index (AI), center-edge angle (CEA), and acetabular head index (AHI) were 16.4°, 23.7°, and 85.5%, respectively, each of which were significantly improved compared with the preoperative values. Moreover, the mean postoperative iliac length difference (ILD) between the operative and contralateral sides was only 0.1 mm. Those treated with AIO had a significantly shorter operative time and time to bone union, and less blood loss, than those treated with SIO. The mean distance d, ROH, and LRA did not differ significantly from SIO results, while the mean ILD was significantly less.

AIO is a less-invasive procedure that does not require a bone graft, and the short-term outcomes were favorable. Sufficient coverage of the acetabulum with displacement of the distal bone fragment to an extent similar to SIO can be achieved; we consider AIO a worthy surgical procedure that has the potential to provide good long-term outcomes similar to those seen with SIO.

Therapeutic Level III. See Instructions for Authors for a complete description of levels of evidence.

Outcome at forty-five years after open reduction and innominate osteotomy for late-presenting developmental dislocation of the hip.

J H Wedge, R Salter, Ranjeny Thomas (2007)
A consecutive series of seventy-six patients (101 hips) underwent primary open reduction, capsulorrhaphy, and innominate osteotomy for late-presenting developmental dislocation of the hip. They were between 1.5 and five years old at the time of surgery, which was done between 1958 and 1965. The present study was designed to review the outcome of these patients into middle age. We located and reviewed the cases of sixty patients (eighty hips), which represents a 79% rate of follow-up at forty to forty-eight years postoperatively. Nineteen patients (twenty-four hips) had undergone total hip replacement, and three (three hips) had died of unrelated causes. The remaining thirty-eight patients (fifty-three hips) were assessed by the WOMAC (Western Ontario and McMaster Universities Osteoarthritis Index) and Oxford hip score questionnaires, physical examination, and a standing anteroposterior pelvic radiograph. The radiographs were analyzed to determine the minimum joint space width and the Kellgren and Lawrence score. Accepted indices of hip dysplasia were measured. With use of Kaplan-Meier survival analysis and with the end point defined as total hip replacement, the survival rates at thirty, forty, and forty-five years after the reduction were 99% (95% confidence interval, +/-2.4%), 86% (95% confidence interval, +/-6.9%), and 54% (95% confidence interval, +/-16.4%), respectively. The average Oxford hip score and WOMAC score for the surviving hips were 16.8 (range, 0 to 82) and 16.7 (range, 0 to 71), respectively. Of the fifty-one hips for which radiographs were available, thirty-eight demonstrated a minimum joint space width of >2.0 mm and thirteen demonstrated definite osteoarthritis on the basis of this criterion. Osteoarthritis, according to the system of Kellgren and Lawrence, was grade 0 or 1 in twenty-nine hips, grade 2 in seven hips, and grade 3 or 4 in fifteen hips. The average center-edge and acetabular angles were 40 degrees (range, 0 degrees to 61 degrees ) and 32 degrees (range, 20 degrees to 43 degrees ), respectively. With the numbers studied, no significant association was detected between outcome and the modifiable risk factors of body mass index or age at the time of surgery. Hips in patients with bilateral involvement were at significantly greater risk of failure (p = 0.02). This method of treatment achieves a 54% rate of survival of the hip at forty-five years. Two-thirds of the surviving hips have an excellent prognosis forty to forty-eight years after the index procedure according to the Kellgren and Lawrence score.

Salter innominate osteotomy for the treatment of developmental dysplasia of the hip in children: results of seventy-three consecutive osteotomies after twenty-six to thirty-five years of follow-up.

Annemarie Brzuske, P Böhm (2002)
Reorientation of the acetabulum may be necessary in the treatment of an unstable hip in children with developmental dysplasia of the hip. In 1961, Salter described the innominate osteotomy for stabilizing the reduced hip in the position of function by redirection of the acetabulum as one piece. In the present study, we describe our long-term results with this procedure. We reviewed the cases of sixty-one patients who had seventy-three Salter innominate osteotomies. At the time of the operation, the mean age of the patients was 4.1 years (range, 1.3 to 8.8 years). Radiographs made preoperatively, postoperatively, and at the time of the most recent follow-up visit were evaluated. Clinical evaluation was performed with use of the Merle d'Aubigné and Postel system as well as the Harris hip score. The mean duration of follow-up was 30.9 years (range, 26.2 to 35.4 years). There were seven true revisions (one acetabuloplasty, one triple osteotomy, and five total hip arthroplasties). With true revision as the end point, the cumulative survival rate at 35.3 years was 0.90. Fifteen of the seventy-three hips were considered a failure, which was defined as a revision or a Harris hip score of <70 points and/or a Merle d'Aubigné and Postel score of <13 points. The long-term clinical outcome was significantly influenced by the grade of dislocation on the radiographs made at the first examination (p = 0.0388) and on those made immediately preoperatively (p < 0.0001), the postoperative summarized hip factor (the radiographic grade of dysplasia) (p = 0.0002), the preoperative (p = 0.0392) and postoperative (p = 0.0072) grades of avascular necrosis of the femoral head, and the technique of reduction (p < 0.0001). When an acetabulum can be most closely restored to a normal configuration without the development of avascular necrosis, good long-term results (lasting for more than thirty years) can be expected. When open reduction is necessary, it is preferable to perform it separately prior to the Salter innominate osteotomy. The grade of dislocation at the time of the first examination and immediately preoperatively, the grade of avascular necrosis of the femoral head, and the adequacy of surgical correction are important prognostic factors for the long-term clinical result.

This is an open-access article distributed under the terms of the Creative Commons Attribution-Non Commercial-No Derivatives License 4.0 (CCBY-NC-ND), where it is permissible to download and share the work provided it is properly cited. The work cannot be changed in any way or used commercially without permission from the journal.