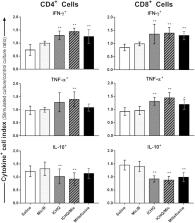 A clioquinol (ICHQ)-containing Pluronic ® F127 polymeric micelle system (ICHQ/Mic) was recently shown to be effective against Leishmania amazonensis infection in a murine model. In the present study, ICHQ/Mic was tested against L. infantum infection. BALB/c mice ( n = 12 per group) were infected with L. infantum stationary promastigotes through subcutaneous injection and, 45 days after challenge, received saline or were treated via the subcutaneous route with empty micelles, ICHQ or ICHQ/Mic. In addition, animals were treated with miltefosine by the oral route, as a drug control. Half of the animals were euthanized 1 and 15 days after treatment, aiming to evaluate two endpoints after therapy, when parasitological and immunological parameters were investigated. Results showed that the treatment using miltefosine, ICHQ or ICHQ/Mic induced significantly higher anti-parasite IFN-γ, IL-12, GM-CSF, nitrite and IgG2a isotype antibody levels, which were associated with low IL-4 and IL-10 production. In addition, a higher frequency of IFN-γ and TNF-α-producing CD4 + and CD8 + T-cells was found in these animals. The parasite load was evaluated in distinct organs, and results showed that the treatment using miltefosine, ICHQ or ICHQ/Mic induced significant reductions in organic parasitism in the treated and infected mice. A comparison between the treatments suggested that ICHQ/Mic was the most effective in inducing a highly polarized Th1-type response, as well as reducing the parasite load in significant levels in the treated and infected animals. Data obtained 15 days after treatment suggested maintenance of the immunological and parasitological responses. In conclusion, ICHQ/Mic could be considered in future studies for the treatment of visceral leishmaniasis.

Miltefosine: a review of its pharmacology and therapeutic efficacy in the treatment of leishmaniasis.

Leon J. De Windt,  I D Bruijn,  Thomas Dorlo … (2012)
Miltefosine is an alkylphosphocholine drug with demonstrated activity against various parasite species and cancer cells as well as some pathogenic bacteria and fungi. For 10 years it has been licensed in India for the treatment of visceral leishmaniasis (VL), a fatal neglected parasitic disease. It is the first and still the only oral drug that can be used to treat VL and cutaneous leishmaniasis (CL). The standard 28 day miltefosine monotherapy regimen is well tolerated, except for mild gastrointestinal side effects, although its teratogenic potential severely hampers its general use in the clinic and roll-out in national elimination programmes. The pharmacokinetics of miltefosine are mainly characterized by its long residence time in the body, resulting in extensive drug accumulation during treatment and long elimination half-lives. At the moment, different combination therapy strategies encompassing miltefosine are being tested in multiple controlled clinical trials in various geographical areas of endemicity, both in South Asia and East Africa. We here review the most salient pre-clinical and clinical pharmacological aspects of miltefosine, its mechanism of action against Leishmania parasites and other pathogens, and provide a systematic overview of the efficacy and safety data from all clinical trials of miltefosine, either alone or in combination, in the treatment of VL and CL.

Frédéric Frézard,  Cynthia Demicheli,  Raul Ribeiro (2009)
Pentavalent antimonials, including meglumine antimoniate and sodium stibogluconate, have been used for more than half a century in the therapy of the parasitic disease leishmaniasis. Even though antimonials are still the first-line drugs, they exhibit several limitations, including severe side effects, the need for daily parenteral administration and drug resistance. The molecular structure of antimonials, their metabolism and mechanism of action are still being investigated. Some recent studies suggest that pentavalent antimony acts as a prodrug that is converted to active and more toxic trivalent antimony. Other works support the direct involvement of pentavalent antimony. Recent data suggest that the biomolecules, thiols and ribonucleosides, may mediate the actions of these drugs. This review will summarize the progress to date on the chemistry and biochemistry of pentavalent antimony. It will also present the most recent works being done to improve antimonial chemotherapy. These works include the development of simple synthetic methods for pentavalent antimonials, liposome-based formulations for targeting the Leishmania parasites responsible for visceral leishmaniasis and cyclodextrin-based formulations to promote the oral delivery of antimony.