Atrophy of primary lymphoid organs induced by Marek’s disease virus during early infection is associated with increased apoptosis, inhibition of cell proliferation and a severe B-lymphopenia 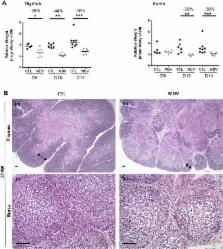 Marek’s disease is a multi-faceted highly contagious disease affecting chickens caused by the Marek’s disease alphaherpesvirus (MDV). MDV early infection induces a transient immunosuppression, which is associated with thymus and bursa of Fabricius atrophy. Little is known about the cellular processes involved in primary lymphoid organ atrophy. Here, by in situ TUNEL assay, we demonstrate that MDV infection results in a high level of apoptosis in the thymus and bursa of Fabricius, which is concomitant to the MDV lytic cycle. Interestingly, we observed that in the thymus most of the MDV infected cells at 6 days post-infection (dpi) were apoptotic, whereas in the bursa of Fabricius most of the apoptotic cells were uninfected suggesting that MDV triggers apoptosis by two different modes in these two primary lymphoid organs. In addition, a high decrease of cell proliferation was observed from 6 to 14 dpi in the bursa of Fabricius follicles, and not in the thymus. Finally, with an adapted absolute blood lymphocyte count, we demonstrate a major B-lymphopenia during the two 1st weeks of infection, and propose this method as a potent non-invasive tool to diagnose MDV bursa of Fabricius infection and atrophy. Our results demonstrate that the thymus and bursa of Fabricius atrophies are related to different cell mechanisms, with different temporalities, that affect infected and uninfected cells.

Attenuation of Marek's disease virus by deletion of open reading frame RLORF4 but not RLORF5a.

Keith W. Jarosinski,  Nikolaus Osterrieder,  K A Schat … (2005)
Marek's disease (MD) in chickens is caused by the alphaherpesvirus MD virus (MDV) and is characterized by the development of lymphoblastoid tumors in multiple organs. The recent identification and cloning of RLORF4 and the finding that four of six attenuated strains of MDV contained deletions within RLORF4 suggested that it is involved in the attenuation process of MDV. To assess the role of RLORF4 in MD pathogenesis, its coding sequence was deleted in the pRB-1B bacterial artificial chromosome clone. Additionally, RLORF5a was deleted separately to examine its importance for oncogenesis. The sizes of plaques produced by MDV reconstituted from pRB-1BdeltaRLORF5a (rRB-1BdeltaRLORF5a) were similar to those produced by the parental pRB-1B virus (rRB-1B). In contrast, virus reconstituted from pRB-1BDeltaRLORF4 (rRB-1BdeltaRLORF4) produced significantly larger plaques. Replication of the latter virus in cultured cells was higher than that of rRB-1B or rRB-1BdeltaRLORF5a using quantitative PCR (qPCR) assays. In vivo, both deletion mutants and rRB-1B replicated at comparable levels at 4, 7, and 10 days postinoculation (p.i.), as determined by virus isolation and qPCR assays. At 14 days p.i., the number of PFU of virus isolated from chickens infected with rRB-1BdeltaRLORF4 was comparable to that from chickens infected with highly attenuated RB-1B and significantly lower than that from rRB-1B-infected birds. The number of tumors and kinetics of tumor production in chickens infected with rRB-1BdeltaRLORF5a were similar to those of P2a chickens infected with rRB-1B. In stark contrast, none of the chickens inoculated with rRB-1BdeltaRLORF4 died up to 13 weeks p.i.; however, two chickens had tumors at the termination of the experiment. The data indicate that RLORF4 is involved in attenuation of MDV, although the function of RLORF4 is still unknown.

Sascha Trapp,  Nikolaus Osterrieder,  B. Tischer … (2006)
Marek's disease (MD) is caused by a ubiquitous, lymphotropic alphaherpesvirus, MD virus (MDV). MD has been a major concern in the poultry industry owing to the emergence of increasingly virulent strains over the last few decades that were isolated in the face of comprehensive vaccination. The disease is characterized by a variety of clinical signs; among them are neurological symptoms, chronic wasting and, most notably, the development of multiple lymphomas that manifest as solid tumors in the viscera and musculature. Much work has been devoted to study MD-induced oncogenesis and the genes involved in this process. Among the many genes encoded by MDV, a number have been shown recently to affect the development of tumors in chickens, one protein directly causing transformation of cells (Meq) and another being involved in maintaining transformed cells (vTR). Other MDV gene products modulate and are involved in early lytic in vivo replication, thereby increasing the chance of transformation occurring. In this review, we will summarize specific genes encoded by MDV that are involved in the initiation and/or maintenance of transformation and will focus mostly on current vaccination and control strategies against MD, particularly how modern molecular biological methods may be used to improve strategies to combat the disease in the future.

Tolerance has its limits: how the thymus copes with infection.

Cláudio Nunes-Alves,  Claudia Nobrega,  Samuel Behar … (2013)
The thymus is required for T cell differentiation; a process that depends on which antigens are encountered by thymocytes, the environment surrounding the differentiating cells, and the thymic architecture. These features are altered by local infection of the thymus and by the inflammatory mediators that accompany systemic infection. Although once believed to be an immune privileged site, it is now known that antimicrobial responses are recruited to the thymus. Resolving infection in the thymus is important because chronic persistence of microbes impairs the differentiation of pathogen-specific T cells and diminishes resistance to infection. Understanding how these mechanisms contribute to disease susceptibility, particularly in infants with developing T cell repertoires, requires further investigation.