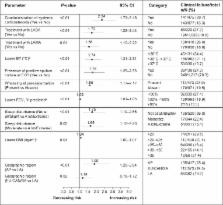 Acute exacerbations represent a significant burden for patients with moderate-to-severe chronic obstructive pulmonary disease. Each exacerbation episode is frequently associated with a lengthy recovery and impaired quality of life. Prognostic factors for outpatients that may predict poor outcome after treatment with antibiotics recommended in the guidelines, are not fully understood. We aimed to identify pretherapy factors predictive of clinical failure in elderly (≥60 years old) outpatients with acute Anthonisen type 1 exacerbations.

Several bacteriological, historical, treatment-related factors were identified as predictors of early (EOT) and later (8 weeks posttherapy) clinical failure in this older outpatient population with moderate-to-severe chronic obstructive pulmonary disease. These patients should be closely monitored and sputum cultures considered before and after treatment.

Kazuhiro Nakamura (2011)
Body temperature regulation is a fundamental homeostatic function that is governed by the central nervous system in homeothermic animals, including humans. The central thermoregulatory system also functions for host defense from invading pathogens by elevating body core temperature, a response known as fever. Thermoregulation and fever involve a variety of involuntary effector responses, and this review summarizes the current understandings of the central circuitry mechanisms that underlie nonshivering thermogenesis in brown adipose tissue, shivering thermogenesis in skeletal muscles, thermoregulatory cardiac regulation, heat-loss regulation through cutaneous vasomotion, and ACTH release. To defend thermal homeostasis from environmental thermal challenges, feedforward thermosensory information on environmental temperature sensed by skin thermoreceptors ascends through the spinal cord and lateral parabrachial nucleus to the preoptic area (POA). The POA also receives feedback signals from local thermosensitive neurons, as well as pyrogenic signals of prostaglandin E(2) produced in response to infection. These afferent signals are integrated and affect the activity of GABAergic inhibitory projection neurons descending from the POA to the dorsomedial hypothalamus (DMH) or to the rostral medullary raphe region (rMR). Attenuation of the descending inhibition by cooling or pyrogenic signals leads to disinhibition of thermogenic neurons in the DMH and sympathetic and somatic premotor neurons in the rMR, which then drive spinal motor output mechanisms to elicit thermogenesis, tachycardia, and cutaneous vasoconstriction. Warming signals enhance the descending inhibition from the POA to inhibit the motor outputs, resulting in cutaneous vasodilation and inhibited thermogenesis. This central thermoregulatory mechanism also functions for metabolic regulation and stress-induced hyperthermia.

Claire L. Davies,  Peter M A Calverley,  Elizabeth Angus (1999)
The role of oral corticosteroids in treating patients with exacerbations of chronic obstructive pulmonary disease (COPD) remains contentious. We assessed in a prospective, randomised, double-blind, placebo-controlled trial the effects of oral corticosteroid therapy in patients with exacerbations of COPD requiring hospital admission. We recruited patients with non-acidotic exacerbations of COPD who were randomly assigned oral prednisolone 30 mg once daily (n=29) or identical placebo (n=27) for 14 days, in addition to standard treatment with nebulised bronchodilators, antibiotics, and oxygen. We did spirometry and recorded symptom scores daily in inpatients. Time to discharge and withdrawals were noted in each group. We recalled patients at 6 weeks to repeat spirometry and collect data on subsequent exacerbations and treatment. Hospital stay was analysed by intention to treat and forced expiratory volume in 1 s (FEV1) according to protocol. FEV1 after bronchodilation increased more rapidly and to a greater extent in the corticosteroid-treated group: percentage predicted FEV1 after bronchodilation rose from 25.7% (95% CI 21.0-30.4) to 32.2% (27.3-27.1) in the placebo group (p<0.0001) compared with 28.2% (23.5-32.9) to 41.5% (35.8-47.2) in the corticosteroid-treated group (p<0.0001). Up to day 5 of hospital stay, FEV1 after bronchodilation increased by 90 mL daily (50.8-129.2) and by 30 mL daily (10.4-49.6) in the placebo group (p=0.039). Hospital stays were shorter in the corticosteroid-treated group. Groups did not differ at 6-week follow-up. These data provide evidence to support the current practice of prescribing low-dose oral corticosteroids to all patients with non-acidotic exacerbations of COPD requiring hospital admission.

Paul S Spencer,  ,  Jace W. Jones (2003)
The magnitude and time course of effect of an acute exacerbation of chronic bronchitis (AECB) on health status are not known. Data from the GLOBE study, a randomised double blind trial of antibiotic therapy, were used to investigate these effects. 438 patients with AECB received either gemifloxacin 320 mg once daily for 5 days (214 patients) or clarithromycin 500 mg twice daily for 7 days (224 patients) and were followed up for 26 weeks. St George's Respiratory Questionnaire (SGRQ) scores were obtained at baseline and after 4, 12, and 26 weeks. At presentation during an exacerbation SGRQ scores were worse (Total score difference 5.4 units, 95% CI 1.9 to 8.8, p=0.002) in patients who had a subsequent exacerbation during follow up. The greatest improvement in SGRQ score occurred within the first 4 weeks (mean 8.9 units, 95% CI 6.5 to 11.5, p<0.0001). Subsequently, scores improved more rapidly in patients with no further exacerbations. At 26 weeks the difference between the two groups was 9.6 units (95% CI 5.7 to 13.4, p<0.0001). In patients with no further exacerbations the SGRQ score improved between 4 and 12 weeks by a further 4.1 units (95% CI 2.2 to 5.9, p<0.0001). A single infective AECB has a sustained effect on health status. The recovery period is long even in patients who have no further exacerbations. A second episode within 6 months limits recovery markedly. Treatments that reduce exacerbation frequency could have a significant impact on health status.