Insect pollination: an ecological process involved in the assembly of the seed microbiota 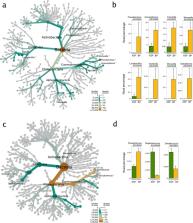 The assembly of the seed microbiota involves some early microbial seed colonizers that are transmitted from the maternal plant through the vascular system, while other microbes enter through the stigma. Thus, the seed microbiota consists of microbes not only recruited from the plant vascular tissues, but also from the flower. Flowers are known to be a hub for microbial transmission between plants and insects. This floral-insect exchange opens the possibility for insect-transmitted bacteria to colonize the ovule and, subsequently, the seed to pass then into the next plant generation. In this study, we evaluated the contribution of insect pollination to the seed microbiota through high-throughput sequencing. Oilseed rape (OSR) flowers were exposed to visits and pollination by honey bees ( Apis mellifera), red mason bees ( Osmia bicornis), hand pollinated or left for autonomous self-pollination (ASP). Sequence analyses revealed that honey bee visitation reduced bacterial richness and diversity in seeds, but increased the variability of seed microbial structure, and introduced bee-associated taxa. In contrast, mason bee pollination had minor effects on the seed microbiota. Our study provides the first evidence that insect pollination is an ecological process involved in the transmission of bacteria from flowers to seeds.

A simple and distinctive microbiota associated with honey bees and bumble bees.

Vincent G. Martinson,  Bryan N. Danforth,  Robert L Minckley … (2011)
Specialized relationships with bacteria often allow animals to exploit a new diet by providing a novel set of metabolic capabilities. Bees are a monophyletic group of Hymenoptera that transitioned to a completely herbivorous diet from the carnivorous diet of their wasp ancestors. Recent culture-independent studies suggest that a set of distinctive bacterial species inhabits the gut of the honey bee, Apis mellifera. Here we survey the gut microbiotae of diverse bee and wasp species to test whether acquisition of these bacteria was associated with the transition to herbivory in bees generally. We found that most bee species lack phylotypes that are the same or similar to those typical of A. mellifera, rejecting the hypothesis that this dietary transition was symbiont-dependent. The most common bacteria in solitary bee species are a widespread phylotype of Burkholderia and the pervasive insect associate, Wolbachia. In contrast, several social representatives of corbiculate bees do possess distinctive bacterial phylotypes. Samples of A. mellifera harboured the same microbiota as in previous surveys, and closely related bacterial phylotypes were identified in two Asian honey bees (Apis andreniformis and Apis dorsata) and several bumble bee (Bombus) species. Potentially, the sociality of Apis and Bombus species facilitates symbiont transmission and thus is key to the maintenance of a more consistent gut microbiota. Phylogenetic analyses provide a more refined taxonomic placement of the A. mellifera symbionts. © 2010 Blackwell Publishing Ltd.

Endophytes of grapevine flowers, berries, and seeds: identification of cultivable bacteria, comparison with other plant parts, and visualization of niches of colonization.

Birgit Mitter,  Stéphane Compant,  Helmut Gangl … (2011)
Endophytic bacteria can colonize various plants and organs. However, endophytes colonizing plant reproductive organs have been rarely analyzed. In this study, endophytes colonizing flowers as well as berries and seeds of grapevine plants grown under natural conditions were investigated by cultivation as well as by fluorescence in situ hybridization. For comparison, bacteria were additionally isolated from other plant parts and the rhizosphere and characterized. Flowers, fruits, and seeds hosted various endophytic bacteria. Some taxa were specifically isolated from plant reproductive organs, whereas others were also detected in the rhizosphere, endorhiza or grape inflo/infructescence stalk at the flowering or berry harvest stage. Microscopic analysis by fluorescence in situ hybridization of resin-embedded samples confirmed the presence of the isolated taxa in plant reproductive organs and enabled us to localize them within the plant. Gammaproteobacteria (including Pseudomonas spp.) and Firmicutes (including Bacillus spp.) were visualized inside the epidermis and xylem of ovary and/or inside flower ovules. Firmicutes, mainly Bacillus spp. were additionally visualized inside berries, in the intercellular spaces of pulp cells and/or xylem of pulp, but also along some cell walls inside parts of seeds. Analysis of cultivable bacteria as well as microscopic results indicated that certain endophytic bacteria can colonize flowers, berries, or seeds. Our results also indicated that some specific taxa may not only derive from the root environment but also from other sources such as the anthosphere.

Funded by: AgreenSkills+ fellowship programme, which has received funding from the EU’s Seventh Framework Programme under grant agreement n° FP7-609398.