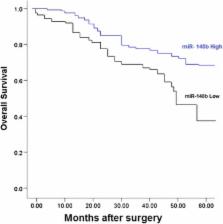 Lung cancer is most common and is the leading cause of cancer-related death in both men and women worldwide. Understanding of the molecular mechanisms underlying non-small cell lung cancer (NSCLC) development and progression are important. In the present study, we investigated the potential role of miR-148b expression analysis as potential lung cancer biomarker with the correlation of circulating miR-148b to clinicopathological features.

A total of 104 NSCLC patients were diagnosed and cancer tissues together with adjacent normal tissues were evaluated. Quantitative Real-time PCR method was utilized to evaluate the expression levels of miR-148b. In addition, we investigated to clarify the relationship of miR-148b with clinicopathological features and survival in patients with NSCLC.

Our findings showed that miR-148b was downregulated in tumor tissues when compared with corresponding adjacent normal lung tissues (0.34 ± 0.13 vs. 1.00 ± 0.57, P < 0.05). Moreover decreased expression of miR-148b was significantly related to TNM stage ( P = 0.001) and lymph node-metastasis ( P = 0.023). This findings suggested that miR-148b was down-regulated in NSCLC patients and may play a key role as a tumor suppressor gene in NSCLC. Kaplan-Meier survival analysis and log-rank test suggested that low-expression group of patients had significantly shorter overall survival than high-expression group (log-rank test: P = 0.031). Multivariate Cox proportional hazards model analysis indicated that low miR-148b expression was independently linked to poor survival of patients with NSCLC (HR = 3.215, 95 % CI: 1.543-10.621, P = 0.021) and other factors were not significant independent predictor of survival in patients with NSCLC.

Our findings demonstrated that miR-148b may play a role as independent prognostic factor for patients with NSCLC.

Zhenning Wang,  Yong-xi Song,  Zhen-yu Yue … (2011)
Background MicroRNAs (miRNAs) are involved in cancer development and progression, acting as tumor suppressors or oncogenes. Our previous studies have revealed that miR-148a and miR-152 are significantly down-regulated in gastrointestinal cancers. Interestingly, miR-148b has the same "seed sequences" as miR-148a and miR-152. Although aberrant expression of miR-148b has been observed in several types of cancer, its pathophysiologic role and relevance to tumorigenesis are still largely unknown. The purpose of this study was to elucidate the molecular mechanisms by which miR-148b acts as a tumor suppressor in gastric cancer. Results We showed significant down-regulation of miR-148b in 106 gastric cancer tissues and four gastric cancer cell lines, compared with their non-tumor counterparts by real-time RT-PCR. In situ hybridization of ten cases confirmed an overt decrease in the level of miR-148b in gastric cancer tissues. Moreover, the expression of miR-148b was demonstrated to be associated with tumor size (P = 0.027) by a Mann-Whitney U test. We also found that miR-148b could inhibit cell proliferation in vitro by MTT assay, growth curves and an anchorage-independent growth assay in MGC-803, SGC-7901, BGC-823 and AGS cells. An experiment in nude mice revealed that miR-148b could suppress tumorigenicity in vivo. Using a luciferase activity assay and western blot, CCKBR was identified as a target of miR-148b in cells. Moreover, an obvious inverse correlation was observed between the expression of CCKBR protein and miR-148b in 49 pairs of tissues (P = 0.002, Spearman's correlation). Conclusions These findings provide important evidence that miR-148b targets CCKBR and is significant in suppressing gastric cancer cell growth. Maybe miR-148b would become a potential biomarker and therapeutic target against gastric cancer.

miR148b is a major coordinator of breast cancer progression in a relapse-associated microRNA signature by targeting ITGA5, ROCK1, PIK3CA, NRAS, and CSF1.

Eva Maria Pinatel,  Matteo Zampini,  Riccardo Ponzone … (2013)
Breast cancer is often fatal during its metastatic dissemination. To unravel the role of microRNAs (miRs) during malignancy, we analyzed miR expression in 77 primary breast carcinomas and identified 16 relapse-associated miRs that correlate with survival and/or distinguish tumor subtypes in different datasets. Among them, miR-148b, down-regulated in aggressive breast tumors, was found to be a major coordinator of malignancy. In fact, it is able to oppose various steps of tumor progression when overexpressed in cell lines by influencing invasion, survival to anoikis, extravasation, lung metastasis formation, and chemotherapy response. miR-148b controls malignancy by coordinating a novel pathway involving over 130 genes and, in particular, it directly targets players of the integrin signaling, such as ITGA5, ROCK1, PIK3CA/p110α, and NRAS, as well as CSF1, a growth factor for stroma cells. Our findings reveal the importance of the identified 16 miRs for disease outcome predictions and suggest a critical role for miR-148b in the control of breast cancer progression.

Huimian Xu,  Yue Chen,  Yongxi Song … (2012)
MicroRNAs (miRNAs) play an important role in the regulation of a variety of cellular processes, including cell growth, differentiation, apoptosis and carcinogenesis. The purpose of this study was to elucidate the molecular mechanisms by which miR-148b acts as a tumor suppressor in colorectal cancer. The expression of miR-148b was significantly downregulated in 96 pairs of human colorectal cancer tissues (p<0.0001) and three cell lines (p<0.01) compared with non-tumor adjacent tissues by quantitative real-time PCR. The results of in situ hybridization highlighted that miR-148b was important in the cancer transformation process. Using statistical analysis, we found that the expression level of miR-148b was associated with tumor size (p=0.033) in colorectal cancer patients. Moreover, overexpression of miR-148b in HCT-116 and HT-29 cells could inhibit cell proliferation in vitro and suppress tumorigenicity in vivo. Importantly, the result of luciferase activity assay and western blot showed that the cholecystokinin-2 receptor gene (CCK2R) was a target of miR-148b and was downregulated by miR-148b at the translational level. Then, we used siRNA, radioimmunoassay and ELISA to demonstrate that miR-148b might have an effect on cell proliferation by regulating the expression of CCK2R which functioned depending on the gastrin in colorectal cancer. Taken together, our data provides the first evidences that miR-148b acts as a tumor suppressor in colorectal cancer and should be further evaluated as a biomarker and therapeutic tool against colorectal cancer. Copyright © 2011 UICC.