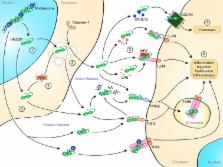 Our immune system is based on the close collaboration of the innate and adaptive immune systems for the rapid detection of any threats to the host. Recognition of pathogen-derived molecules is entrusted to specific germline-encoded signaling receptors. The same receptors have now also emerged as efficient detectors of misplaced or altered self-molecules that signal tissue damage and cell death following, for example, disruption of the blood supply and subsequent hypoxia. Many types of endogenous molecules have been shown to provoke such sterile inflammatory states when released from dying cells. However, a group of proteins referred to as alarmins have both intracellular and extracellular functions which have been the subject of intense research. Indeed, alarmins can either exert beneficial cell housekeeping functions, leading to tissue repair, or provoke deleterious uncontrolled inflammation. This group of proteins includes the high-mobility group box 1 protein (HMGB1), interleukin (IL)-1α, IL-33 and the Ca 2+-binding S100 proteins. These dual-function proteins share conserved regulatory mechanisms, such as secretory routes, post-translational modifications and enzymatic processing, that govern their extracellular functions in time and space. Release of alarmins from mesenchymal cells is a highly relevant mechanism by which immune cells can be alerted of tissue damage, and alarmins play a key role in the development of acute or chronic inflammatory diseases and in cancer development.

Marco Bianchi,  Tom Misteli,  Paola Scaffidi (2002)
High mobility group 1 (HMGB1) protein is both a nuclear factor and a secreted protein. In the cell nucleus it acts as an architectural chromatin-binding factor that bends DNA and promotes protein assembly on specific DNA targets. Outside the cell, it binds with high affinity to RAGE (the receptor for advanced glycation end products) and is a potent mediator of inflammation. HMGB1 is secreted by activated monocytes and macrophages, and is passively released by necrotic or damaged cells. Here we report that Hmgb1(-/-) necrotic cells have a greatly reduced ability to promote inflammation, which proves that the release of HMGB1 can signal the demise of a cell to its neighbours. Apoptotic cells do not release HMGB1 even after undergoing secondary necrosis and partial autolysis, and thus fail to promote inflammation even if not cleared promptly by phagocytic cells. In apoptotic cells, HMGB1 is bound firmly to chromatin because of generalized underacetylation of histone and is released in the extracellular medium (promoting inflammation) if chromatin deacetylation is prevented. Thus, cells undergoing apoptosis are programmed to withhold the signal that is broadcast by cells that have been damaged or killed by trauma.

Gerard Zurawski,  Xiaoxia Li,  Alexander Owyang … (2005)
Cytokines of the interleukin-1 (IL-1) family, such as IL-1 alpha/beta and IL-18, have important functions in host defense, immune regulation, and inflammation. Insight into their biological functions has led to novel therapeutic approaches to treat human inflammatory diseases. Within the IL-1 family, IL-1 alpha/beta, IL-1Ra, and IL-18 have been matched to their respective receptor complexes and have been shown to have distinct biological functions. The most prominent orphan IL-1 receptor is ST 2. This receptor has been described as a negative regulator of Toll-like receptor-IL-1 receptor signaling, but it also functions as an important effector molecule of T helper type 2 responses. We report a member of the IL-1 family, IL-33, which mediates its biological effects via IL-1 receptor ST 2, activates NF-kappaB and MAP kinases, and drives production of T(H)2-associated cytokines from in vitro polarized T(H)2 cells. In vivo, IL-33 induces the expression of IL-4, IL-5, and IL-13 and leads to severe pathological changes in mucosal organs.