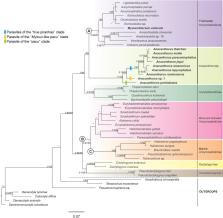 Anacanthorus (Anacanthorinae) is one of the most speciose and common genera of neotropical monogeneans, yet there are still many gaps in our knowledge concerning their diversity and phylogeny. We performed phylogenetic analyses of molecular sequences in order to investigate the phylogenetic position within the Dactylogyridae of Anacanthorus spp. infesting serrasalmids from two Brazilian river basins. Sequences of partial 28S rDNA obtained for nine species of Anacanthorus and Mymarothecium viatorum parasitizing serrasalmids and the published sequences of other members of the Dactylogyridae were included in the phylogenetic reconstruction. Phylogenetic analyses supported the monophyly of anacanthorine monogeneans. The Anacanthorinae (represented in this study by Anacanthorus spp.) formed a monophyletic group included in a large clade together with a group of solely freshwater Ancyrocephalinae and species of the Ancylodiscoidinae. Mymarothecium viatorum (Ancyrocephalinae) was placed within the clade of freshwater Ancyrocephalinae. The phylogenetic analyses indicated that the relationships among species of Anacanthorus reflect those of their serrasalmid hosts: the first subgroup includes a species specific to hosts assigned to Piaractus, a member of the “pacus” lineage; the second subgroup includes a species parasitizing the “ Myleus-like pacus” lineage; and the third subgroup includes species parasitizing the lineage of the “true piranhas”. We suggest that Anacanthorus and their serrasalmid hosts can be considered a useful model to assess host-parasite biogeography and coevolution in the neotropics. However, future studies focusing on a wider spectrum of host species and their specific Anacanthorus spp. are needed in order to investigate coevolution in this highly diversified system.

Utility of complete large and small subunit rRNA genes in resolving the phylogeny of the Neodermata (Platyhelminthes): implications and a review of the cercomer theory

Jaakko Lumme,  Marek Ziętara (2002)
Four hundred Gyrodactylus species have been formally described, but the estimated number of species in this fish ectoparasite genus of Monogenean Platyhelminthes is more than 20,000. The unusually high species richness has lead to the hypotheses of speciation and adaptive radiation via host switching. These hypotheses were tested by reconstructing a molecular phylogeny for the subgenus G. (Limnonephrotus) which is a group of freshwater parasites, including five species infecting wild and farmed salmonids. The highly variable ITS1 and ITS2 segments and the conservative 5.8S ribosomal gene were sequenced in 22 species plus two species representing the subgenus G. (Paranephrotus) as an outgroup. The phylogeny was compared with host systematics: the species were collected from six fish families (Cyprinidae, Salmonidae, Percidae, Esocidae, Gasterosteidae, and Gobitidae). The phylogenetic analysis demonstrated that G. (Limnonephrotus) is a monophyletic group that was originally hosted by cyprinids. The speciation has occurred in two episodes, the older one manifested in genetic distances 25-33% (4-6 Myr BP). The latter speciation burst occurred in one clade only, perhaps one million years ago. This clade has been morphologically identified as a wageneri species group. It is a monophyletic group of 18 species [studied here] and contains all five salmonid parasites, but also parasites, on cyprinids, percids, esocids, and gasterosteids. In G. (Limnonephrotus), eight host switches crossing the host family barrier were observed, and at least three of them were followed by repetitive speciation. Seven host-switch events were statistically confirmed by bootstrapping. The suggested model of speciation by host switch was accepted, and interestingly the adaptive radiation seems to be a consequence of host switch to a new family (key innovation model). The molecular and ecological evolution rate of Gyrodactylus parasites is manyfold in comparison to host species, and the phylogenies are largely independent and disconnected.