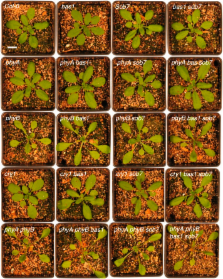 Plants use light as a source of information via a suite of photomorphogenic photoreceptors to optimize growth in response to their light environment. Growth-promoting hormones such as brassinosteroids also can modulate many of these responses. BAS1 and SOB7 are brassinosteroid-catabolizing P450s in Arabidopsis thaliana that synergistically/redundantly modulate photomorphogenic traits such as flowering time. The role of BAS1 and SOB7 in photomorphogenesis has been investigated by studying null-mutant genetic interactions with the photoreceptors phyA, phyB, and cry1 with regard to seed germination and flowering time. The removal of BAS1 and/or SOB7 rescued the low germination rate of the phyA-211 phyB-9 double-null mutant. With regard to floral induction, bas1-2 and sob7-1 showed a complex set of genetic interactions with photoreceptor-null mutants. Histochemical analysis of transgenic plants harboring BAS1:BAS1-GUS and SOB7:SOB7-GUS translational fusions under the control of their endogenous promoters revealed overlapping and distinct expression patterns. BAS1’s expression in the shoot apex increases during the phase transition from short-to-long-day growth conditions and requires phyB in red light. In summary, BAS1 and SOB7 displayed both simple and complex genetic interactions with the phytochromes in a plant-stage specific manner.

Regulation of flowering time: all roads lead to Rome.

Anusha Srikanth,  Markus Schmid (2011)
Plants undergo a major physiological change as they transition from vegetative growth to reproductive development. This transition is a result of responses to various endogenous and exogenous signals that later integrate to result in flowering. Five genetically defined pathways have been identified that control flowering. The vernalization pathway refers to the acceleration of flowering on exposure to a long period of cold. The photoperiod pathway refers to regulation of flowering in response to day length and quality of light perceived. The gibberellin pathway refers to the requirement of gibberellic acid for normal flowering patterns. The autonomous pathway refers to endogenous regulators that are independent of the photoperiod and gibberellin pathways. Most recently, an endogenous pathway that adds plant age to the control of flowering time has been described. The molecular mechanisms of these pathways have been studied extensively in Arabidopsis thaliana and several other flowering plants.

Peter H. Quail,  K Franklin (2009)
Light signals are fundamental to the growth and development of plants. Red and far-red light are sensed using the phytochrome family of plant photoreceptors. Individual phytochromes display both unique and overlapping roles throughout the life cycle of plants, regulating a range of developmental processes from seed germination to the timing of reproductive development. The evolution of multiple phytochrome photoreceptors has enhanced plant sensitivity to fluctuating light environments, diversifying phytochrome function, and facilitating conditional cross-talk with other signalling systems. The isolation of null mutants, deficient in all individual phytochromes, has greatly advanced understanding of phytochrome functions in the model species, Arabidopsis thaliana. The creation of mutants null for multiple phytochrome combinations has enabled the dissection of redundant interactions between family members, revealing novel regulatory roles for this important photoreceptor family. In this review, current knowledge of phytochrome functions in the light-regulated development of Arabidopsis is summarised.

HY4 gene of A. thaliana encodes a protein with characteristics of a blue-light photoreceptor.

Margaret Ahmad,  Anthony Cashmore (1993)
Specific responses to blue light are found throughout the biological kingdom. These responses--which in higher plants include phototropism, inhibition of hypocotyl elongation, and stomatal opening--are in many cases thought to be mediated by flavin-type photoreceptors. But no such blue-light photoreceptor has yet been identified or isolated, although blue-light responses in plants were reported by Darwin over a century ago, long before the discovery of the now relatively well characterized red/far-red light photoreceptor, phytochrome. Here we describe the isolation of a gene corresponding to the HY4 locus of Arabidopsis thaliana. The hy4 mutant is one of several mutants that are selectively insensitive to blue light during the blue-light-dependent inhibition of hypocotyl elongation response, which suggests that they lack an essential component of the cryptochrome-associated light-sensing pathway. The HY4 gene, isolated by gene tagging, was shown to encode a protein with significant homology to microbial DNA photolyases. As photolyases are a rare class of flavoprotein that catalyse blue-light-dependent reactions, the protein encoded by HY4 has a structure consistent with that of a flavin-type blue-light photoreceptor.