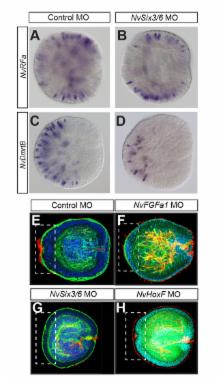 Characterization of bilaterian head patterning genes in a cnidarian reveals a key role for six3/6 in aboral domain development and provides new insight into the evolutionary origin of head development.

The origin of the bilaterian head is a fundamental question for the evolution of animal body plans. The head of bilaterians develops at the anterior end of their primary body axis and is the site where the brain is located. Cnidarians, the sister group to bilaterians, lack brain-like structures and it is not clear whether the oral, the aboral, or none of the ends of the cnidarian primary body axis corresponds to the anterior domain of bilaterians. In order to understand the evolutionary origin of head development, we analysed the function of conserved genetic regulators of bilaterian anterior development in the sea anemone Nematostella vectensis. We show that orthologs of the bilaterian anterior developmental genes six3/6, foxQ2, and irx have dynamic expression patterns in the aboral region of Nematostella. Functional analyses reveal that NvSix3/6 acts upstream of NvFoxQ2a as a key regulator of the development of a broad aboral territory in Nematostella. NvSix3/6 initiates an autoregulatory feedback loop involving positive and negative regulators of FGF signalling, which subsequently results in the downregulation of NvSix3/6 and NvFoxQ2a in a small domain at the aboral pole, from which the apical organ develops. We show that signalling by NvFGFa1 is specifically required for the development of the apical organ, whereas NvSix3/6 has an earlier and broader function in the specification of the aboral territory. Our functional and gene expression data suggest that the head-forming region of bilaterians is derived from the aboral domain of the cnidarian-bilaterian ancestor.

The evolutionary origin of head development is a fundamental question for understanding the evolution of animal body plans. Bilaterally symmetrical animals (Bilaterians) have an anterior-posterior (head-to-tail) axis, whose anterior end is usually characterized by a nervous system centralization, the brain. This region is often associated with a distinct structure, the head, and its development is regulated by a set of conserved transcription factors and signalling molecules. Bilaterians evolved from an ancestor shared with cnidarians (corals, sea anemones, jellyfish), but brain-like structures are absent in cnidarians, although they have an obvious oral-aboral axis. Cnidarian larvae move with the aboral pole forward, but as adult polyps this pole is anchored to the ground, while the oral end is used for feeding. It is unclear whether one of the termini of cnidarians corresponds to the bilaterian head-forming region. We show here that in the sea anemone Nematostella vectensis genes regulating bilaterian head development are expressed at the larval aboral pole and that a key anterior developmental gene, six3/6, controls the development of the aboral pole. These findings support the hypothesis that the anterior, head-forming, region of bilaterians and the aboral region of cnidarians derived from the same domain of their last common ancestor and are therefore homologues.

Unexpected complexity of the Wnt gene family in a sea anemone.

Thomas Holstein,  Ulrich Technau,  Martina Hrouda … (2005)
The Wnt gene family encodes secreted signalling molecules that control cell fate in animal development and human diseases. Despite its significance, the evolution of this metazoan-specific protein family is unclear. In vertebrates, twelve Wnt subfamilies were defined, of which only six have counterparts in Ecdysozoa (for example, Drosophila and Caenorhabditis). Here, we report the isolation of twelve Wnt genes from the sea anemone Nematostella vectensis, a species representing the basal group within cnidarians. Cnidarians are diploblastic animals and the sister-group to bilaterian metazoans. Phylogenetic analyses of N. vectensis Wnt genes reveal a thus far unpredicted ancestral diversity within the Wnt family. Cnidarians and bilaterians have at least eleven of the twelve known Wnt gene subfamilies in common; five subfamilies appear to be lost in the protostome lineage. Expression patterns of Wnt genes during N. vectensis embryogenesis indicate distinct roles of Wnts in gastrulation, resulting in serial overlapping expression domains along the primary axis of the planula larva. This unexpectedly complex inventory of Wnt family signalling factors evolved in early multi-cellular animals about 650 million years (Myr) ago, predating the Cambrian explosion by at least 100 Myr (refs 5, 8). It emphasizes the crucial function of Wnt genes in the diversification of eumetazoan body plans.

Structures of the tyrosine kinase domain of fibroblast growth factor receptor in complex with inhibitors.

Lei Sun,  K A Yeh,  Joseph Schlessinger … (1997)
A new class of protein tyrosine kinase inhibitors was identified that is based on an oxindole core (indolinones). Two compounds from this class inhibited the kinase activity of fibroblast growth factor receptor 1 (FGFR1) and showed differential specificity toward other receptor tyrosine kinases. Crystal structures of the tyrosine kinase domain of FGFR1 in complex with the two compounds were determined. The oxindole occupies the site in which the adenine of adenosine triphosphate binds, whereas the moieties that extend from the oxindole contact residues in the hinge region between the two kinase lobes. The more specific inhibitor of FGFR1 induces a conformational change in the nucleotide-binding loop. This structural information will facilitate the design of new inhibitors for use in the treatment of cancer and other diseases in which cell signaling by tyrosine kinases plays a crucial role in disease pathogenesis.

Anteroposterior patterning in hemichordates and the origins of the chordate nervous system.

Eric S. Lander,  John Gerhart,  Kathryn Evans … (2003)
The chordate central nervous system has been hypothesized to originate from either a dorsal centralized, or a ventral centralized, or a noncentralized nervous system of a deuterostome ancestor. In an effort to resolve these issues, we examined the hemichordate Saccoglossus kowalevskii and studied the expression of orthologs of genes that are involved in patterning the chordate central nervous system. All 22 orthologs studied are expressed in the ectoderm in an anteroposterior arrangement nearly identical to that found in chordates. Domain topography is conserved between hemichordates and chordates despite the fact that hemichordates have a diffuse nerve net, whereas chordates have a centralized system. We propose that the deuterostome ancestor may have had a diffuse nervous system, which was later centralized during the evolution of the chordate lineage.

Related article ( companion): Which Came First, the Head or the Brain?

Research in FR's lab is funded by the Sars Centre core budget. The funders had no role in study design, data collection and analysis, decision to publish, or preparation of the manuscript.