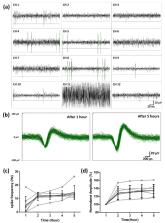 To investigate the neuronal visual encoding process in the retina, researchers have performed in vitro and ex vivo electrophysiological experiments using animal retinal tissues. The microelectrode array (MEA) has become a key component in retinal experiments because it enables simultaneous neural recording from a population of retinal neurons. However, in most retinal experiments, it is inevitable that the retinal tissue is flattened on the planar MEA, becoming deformed from the original hemispherical shape. During the tissue deforming process, the retina is subjected to mechanical stress, which can induce abnormal physiological conditions. To overcome this problem, in this study, we propose a hemispherical MEA with a curvature that allows retinal tissues to adhere closely to electrodes without tissue deformation. The electrode array is fabricated by stretching a thin, flexible polydimethylsiloxane (PDMS) electrode layer onto a hemispherical substrate. To form micro patterns of electrodes, laser processing is employed instead of conventional thin-film microfabrication processes. The feasibility for neural recording from retinal tissues using this array is shown by conducting ex vivo retinal experiments. We anticipate that the proposed techniques for hemispherical MEAs can be utilized not only for ex vivo retinal studies but also for various flexible electronics.

Eberhart Zrenner,  Karl Ulrich Bartz-Schmidt,  Heval Benav … (2010)
A light-sensitive, externally powered microchip was surgically implanted subretinally near the macular region of volunteers blind from hereditary retinal dystrophy. The implant contains an array of 1500 active microphotodiodes (‘chip’), each with its own amplifier and local stimulation electrode. At the implant's tip, another array of 16 wire-connected electrodes allows light-independent direct stimulation and testing of the neuron–electrode interface. Visual scenes are projected naturally through the eye's lens onto the chip under the transparent retina. The chip generates a corresponding pattern of 38 × 40 pixels, each releasing light-intensity-dependent electric stimulation pulses. Subsequently, three previously blind persons could locate bright objects on a dark table, two of whom could discern grating patterns. One of these patients was able to correctly describe and name objects like a fork or knife on a table, geometric patterns, different kinds of fruit and discern shades of grey with only 15 per cent contrast. Without a training period, the regained visual functions enabled him to localize and approach persons in a room freely and to read large letters as complete words after several years of blindness. These results demonstrate for the first time that subretinal micro-electrode arrays with 1500 photodiodes can create detailed meaningful visual perception in previously blind individuals.

Emergence of sustained spontaneous hyperactivity and temporary preservation of OFF responses in ganglion cells of the retinal degeneration (rd1) mouse.

Steven Stasheff (2008)
Complex alterations in the anatomy of outer retinal pathways accompany photoreceptor degeneration in the rd1 mouse model of retinitis pigmentosa, whereas inner retinal neurons appear relatively preserved. However, the progressive loss of photoreceptor input likely alters the neural circuitry of the inner retina. This study investigated resulting changes in the activity of surviving ganglion cells. Multielectrode recording monitored spontaneous and light-evoked extracellular action potentials simultaneously from 30 to 90 retinal ganglion cells of wild-type (wt) or rd1 mice. In rd1 mice, this activity evolves through three phases. First, normal spontaneous "waves" of correlated firing are seen at postnatal day 7 (P7) and last until shortly after eye opening. Second, at P14, full-field light flashes evoke reliable responses in many cells, with preferential preservation of off responses. These diminish as photoreceptor degeneration progresses. Third, once light-evoked responses have disappeared in early adulthood, surviving rd1 ganglion cells fire at a much higher spontaneous frequency than normal, sometimes in rhythmic bursts that are distinct from the developmental "waves." This hyperactivity is sustained well into adulthood, for weeks after photoreceptors have disappeared. Thus striking alterations occur in inner retinal physiology as retinal degeneration progresses in the rd1 mouse. Blindness occurs in the face of sustained hyperactivity among ganglion cells, which remain viable for months despite this activity. On and off responses are differentially affected in early stages of degeneration. While the source of these changes remains to be learned, such features should be considered in designing more effective treatments for these disorders.

Kenry,  Joo Chuan Yeo,  Chwee Teck Lim (2016)
There are now numerous emerging flexible and wearable sensing technologies that can perform a myriad of physical and physiological measurements. Rapid advances in developing and implementing such sensors in the last several years have demonstrated the growing significance and potential utility of this unique class of sensing platforms. Applications include wearable consumer electronics, soft robotics, medical prosthetics, electronic skin, and health monitoring. In this review, we provide a state-of-the-art overview of the emerging flexible and wearable sensing platforms for healthcare and biomedical applications. We first introduce the selection of flexible and stretchable materials and the fabrication of sensors based on these materials. We then compare the different solid-state and liquid-state physical sensing platforms and examine the mechanical deformation-based working mechanisms of these sensors. We also highlight some of the exciting applications of flexible and wearable physical sensors in emerging healthcare and biomedical applications, in particular for artificial electronic skins, physiological health monitoring and assessment, and therapeutic and drug delivery. Finally, we conclude this review by offering some insight into the challenges and opportunities facing this field.