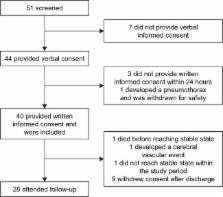 The connection between chronic obstructive pulmonary disease symptoms and hyperinflation and its impact on exercise and function.

B. D. Cooper (2006)
Forced expiratory volume in 1 second (FEV1) has served as an important diagnostic measurement of chronic obstructive pulmonary disease (COPD) but has not been found to correlate with patient-centered outcomes such as exercise tolerance, dyspnea, or health-related quality of life. It has not helped us understand why some patients with severe FEV1 impairment have better exercise tolerance compared with others with similar FEV1 values. Hyperinflation, or air trapping caused by expiratory flow limitation, causes operational lung volumes to increase and even approach the total lung capacity (TLC) during exercise. Some study findings suggest that a dyspnea limit is reached when the end-inspiratory lung volume encroaches within approximately 500 mL of TLC. The resulting limitation in daily physical activity establishes a cycle of decline that includes physical deconditioning (elevated blood lactic acid levels at lower levels of exercise) and worsening dyspnea. Hyperinflation is reduced by long-acting bronchodilators that reduce airways resistance. The deflation of the lungs, in turn, results in an increased inspiratory capacity. For example, the once-daily anticholinergic bronchodilator tiotropium increases inspiratory capacity, 6-minute walk distance, and cycle exercise endurance time, and it decreases isotime fatigue or dyspnea. Pulmonary rehabilitation and oxygen therapy both reduce ventilatory requirements and improve breathing efficiency, thereby reducing hyperinflation and improving exertional dyspnea. Thus, hyperinflation is directly associated with patient-centered outcomes such as dyspnea and exercise limitation. Furthermore, therapeutic interventions--including pharmacotherapy and lung volume--reduction surgery--that reduce hyperinflation improve these outcomes.

The clinical importance of dynamic lung hyperinflation in COPD.

Pierantonio Laveneziana,  Brian O’Donnell (2006)
Lung hyperinflation commonly accompanies expiratory flow-limitation in patients with Chronic Obstructive Pulmonary Disease (COPD) and contributes importantly to dyspnea and activity limitation. It is not surprising, therefore, that lung hyperinflation has become an important therapeutic target in symptomatic COPD patients. There is increasing evidence that acute dynamic increases in lung hyperinflation, under conditions of worsening expiratory flow-limitation and increased ventilatory demand (or both) can seriously stress cardiopulmonary reserves, particularly in patients with more advanced disease. Our understanding of the physiological mechanisms of dynamic lung hyperinflation during both physical activity and exacerbations in COPD continues to grow, together with an appreciation of its serious negative mechanical and sensory consequences. In this review, we will discuss the basic pathophysiology of COPD during rest, exercise and exacerbation so as to better understand how this can be pharmacologically manipulated for the patient's benefit. Finally, we will review current concepts of the mechanisms of symptom relief and improved exercise endurance following pharmacological lung volume reduction.

Does dynamic hyperinflation contribute to dyspnoea during exercise in patients with COPD?

Hayden Webb,  Jordan A. Guenette,  Denis E. O’Donnell (2012)
Dynamic hyperinflation (DH) during exercise occurs in most but not all patients with advanced chronic obstructive pulmonary disease (COPD). It is not known whether the presence or absence of DH has implications for dyspnoea and exercise tolerance. Therefore, we compared detailed ventilatory and sensory responses to exercise in hyperinflators and nonhyperinflators with moderate-to-severe COPD. Nonhyperinflators (n=65) were retrospectively identified from a sample of 427 patients and case-matched to a group of hyperinflators (n=65) based on sex, age, body mass index and % predicted forced expiratory volume in 1 s. Resting pulmonary function and constant work rate cycle exercise responses were compared. Hyperinflators decreased inspiratory capacity (IC) from rest to peak exercise by 0.46±0.24 L whereas the nonhyperinflators increased IC by 0.10±0.15 L (p<0.0001). There were no significant group differences in endurance time (9.11±5.98 versus 8.87±5.24 min) or dyspnoea intensity for any given time or ventilation. An inflection in tidal volume versus ventilation occurred in the majority of nonhyperinflators (n=61) and hyperinflators (n=62) at a similar time and ventilation. Mechanical constraints on tidal volume expansion and the attendant rise in dyspnoea intensity were similar in both groups. Dyspnoea intensity during exercise was associated with progressive mechanical constraints on tidal volume expansion regardless of the presence of DH.