Role of Inflammation in Diabetic Retinopathy 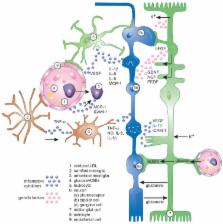 Diabetic retinopathy is a common complication of diabetes and remains the leading cause of blindness among the working-age population. For decades, diabetic retinopathy was considered only a microvascular complication, but the retinal microvasculature is intimately associated with and governed by neurons and glia, which are affected even prior to clinically detectable vascular lesions. While progress has been made to improve the vascular alterations, there is still no treatment to counteract the early neuro-glial perturbations in diabetic retinopathy. Diabetes is a complex metabolic disorder, characterized by chronic hyperglycemia along with dyslipidemia, hypoinsulinemia and hypertension. Increasing evidence points to inflammation as one key player in diabetes-associated retinal perturbations, however, the exact underlying molecular mechanisms are not yet fully understood. Interlinked molecular pathways, such as oxidative stress, formation of advanced glycation end-products and increased expression of vascular endothelial growth factor have received a lot of attention as they all contribute to the inflammatory response. In the current review, we focus on the involvement of inflammation in the pathophysiology of diabetic retinopathy with special emphasis on the functional relationships between glial cells and neurons. Finally, we summarize recent advances using novel targets to inhibit inflammation in diabetic retinopathy.

Resolution of inflammation: state of the art, definitions and terms.

D Gilroy,  Christopher Haslett,  Gregory Wallace … (2007)
A recent focus meeting on Controlling Acute Inflammation was held in London, April 27-28, 2006, organized by D.W. Gilroy and S.D. Brain for the British Pharmacology Society. We concluded at the meeting that a consensus report was needed that addresses the rapid progress in this emerging field and details how the specific study of resolution of acute inflammation provides leads for novel anti-inflammatory therapeutics, as well as defines the terms and key components of interest in the resolution process within tissues as appreciated today. The inflammatory response protects the body against infection and injury but can itself become dysregulated with deleterious consequences to the host. It is now evident that endogenous biochemical pathways activated during defense reactions can counter-regulate inflammation and promote resolution. Hence, resolution is an active rather than a passive process, as once believed, which now promises novel approaches for the treatment of inflammation-associated diseases based on endogenous agonists of resolution.