Association of Dyslipidemia with Renal Outcomes in Chronic Kidney Disease 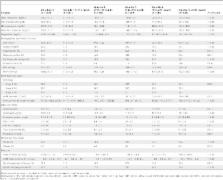 Josef Coresh,  P Muntner,  J. Smith … (2000)
Animal and in vitro data suggest that dyslipidemia plays an important role in the initiation and progression of chronic renal disease, but few prospective studies have been conducted in humans. We studied the relationship of plasma lipids to a rise in serum creatinine of 0.4 mg/dL or greater in 12,728 Atherosclerosis Risk in Communities (ARIC) participants with baseline serum creatinine that was less than 2.0 mg/dL in men and less than 1.8 mg/dL in women. During a mean follow-up of 2.9 years, 191 persons had a rise in creatinine of 0.4 mg/dL or greater, yielding an incidence rate of 5.1 per 1000 person years. Individuals with higher triglycerides and lower high-density lipoprotein (HDL) and HDL-2 cholesterol at baseline were at increased risk for a rise in creatinine after adjustment for race, gender, baseline age, diabetes, serum creatinine, systolic blood pressure, and antihypertensive medication use (all P trends

Linda F. Fried,  Marcello Tonelli,  Manjinder S. Sandhu … (2006)
Statins frequently are used to prevent cardiovascular events. Several recent studies suggest that statins also may have renal benefits, although this is controversial. This systematic review and meta-analysis were performed to assess the effect of statins on change in kidney function and urinary protein excretion. Medline, EMBASE, the Cochrane Central Register of Controlled Trials, conference proceedings, and the authors' personal files were searched. Published or unpublished randomized, controlled trials or crossover trials of statins that reported assessment of kidney function or proteinuria were included, and studies of individuals with ESRD were excluded. Data were extracted for study design, subject characteristics, type of statin and dose, baseline/change in cholesterol levels, and outcomes (change in measured or estimated GFR [eGFR] and/or urinary protein excretion). Weighted mean differences were calculated for the change in GFR between statin and control groups using a random-effects model. A random-effects model also was used to calculate the standardized mean difference for the change in urinary protein excretion between groups. Twenty-seven eligible studies with 39,704 participants (21 with data for eGFR and 20 for proteinuria or albuminuria) were identified. Overall, the change in the weighted mean differences for eGFR was statistically significant (1.22 ml/min per yr slower in statin recipients; 95% confidence interval [CI] 0.44 to 2.00). In subgroup analysis, the benefit of statin therapy was statistically significant in studies of participants with cardiovascular disease (0.93 ml/min per yr slower than control subjects; 95% CI 0.10 to 1.76) but was NS for studies of participants with diabetic or hypertensive kidney disease or glomerulonephritis. The standardized mean difference for the reduction in albuminuria or proteinuria as a result of statin therapy was statistically significant (0.58 units of SD greater in statin recipients; 95% CI 0.17 to 0.98). Statin therapy seems to reduce proteinuria modestly and results in a small reduction in the rate of kidney function loss, especially in populations with cardiovascular disease.