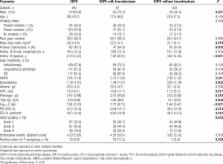 A high prevalence of bronchiectasis was found by chest computed tomography (CT) in patients with moderate–severe chronic obstructive pulmonary disease (COPD), and it was shown to be associated with more severe symptoms, higher frequency of exacerbations and mortality. The risk factors for bronchiectasis in COPD are not yet clarified.

High-resolution computed tomography (HRCT) of chest was performed in patients with moderate–severe COPD, and the presence and the extent of bronchiectasis were evaluated by two radiologists. Demographic data, respiratory symptoms, lung function, previous pulmonary tuberculosis, serum inflammatory markers, serum total immunoglobulin E (T-IgE), and sputum culture of Pseudomonas aeruginosa were compared between those with and without bronchiectasis. Multivariate logistic regression analysis was used to determine the independent factors associated with bronchiectasis.

A Robles Caballero,  A Duque,  Fernando Sanabria … (2008)
The prevalence of COPD in Colombia is unknown. This study aimed to investigate COPD prevalence in five Colombian cities and measure the association between COPD and altitude. A cross-sectional design and a random, multistage, cluster-sampling strategy were used to provide representative samples of adults aged >or= 40 years. Each participant was interviewed (validated Spanish version of the Ferris Respiratory Questionnaire) and performed spirometry before and after 200 microg of inhaled salbutamol, using a portable spirometer according to American Thoracic Society recommendations. COPD definitions were as follows: (1) spirometric: fixed ratio (primary definition): FEV1/FVC or= 3 months every year during >or= 2 consecutive years (chronic bronchitis). Analysis was performed using statistical software. A total of 5,539 orsubjects were included. The overall COPD prevalence using the primary definition (spirometric) was 8.9%, ranging from 6.2% in Barranquilla to 13.5% in Medellín. The prevalence measured by the spirometric definition was higher than medical (2.8%) and clinical (3.2%) definitions. After the logistic regression analysis, the factors related with COPD were age >or= 60 years, male gender, history of tuberculosis, smoking, wood smoke exposure >or= 10 years, and very low education level. There was a nonsignificant tendency toward larger prevalence with higher altitude. COPD is an important health burden in Colombia. Additional studies are needed to establish the real influence of altitude on COPD prevalence.

Characterisation of phenotypes based on severity of emphysema in chronic obstructive pulmonary disease.

Masaru Hasegawa,  Yuya Onodera,  Hironi Makita … (2007)
Airflow limitation in chronic obstructive pulmonary disease (COPD) is caused by a mixture of small airway disease and emphysema, the relative contributions of which may vary among patients. Phenotypes of COPD classified purely based on severity of emphysema are not well defined and may be different from the classic phenotypes of "pink puffers" and "blue bloaters". To characterise clinical phenotypes based on severity of emphysema, 274 subjects with COPD were recruited, excluding those with physician-diagnosed bronchial asthma. For all subjects a detailed interview of disease history and symptoms, quality of life (QOL) measurement, blood sampling, pulmonary function tests before and after inhalation of salbutamol (0.4 mg) and high-resolution CT scanning were performed. Severity of emphysema visually evaluated varied widely even among subjects with the same stage of disease. No significant differences were noted among three groups of subjects classified by severity of emphysema in age, smoking history, chronic bronchitis symptoms, blood eosinophil count, serum IgE level or bronchodilator response. However, subjects with severe emphysema had significantly lower body mass index (BMI) and poorer QOL scores, evaluated using St George's Respiratory Questionnaire (SGRQ), than those with no/mild emphysema (mean (SD) BMI 21.2 (0.5) vs 23.5 (0.3) kg/m(2), respectively; SGRQ total score 40 (3) vs 28 (2), respectively; p<0.001 for both). These characteristics held true even if subjects with the same degree of airflow limitation were chosen. The severity of emphysema varies widely even in patients with the same stage of COPD, and chronic bronchitis symptoms are equally distributed irrespective of emphysema severity. Patients with the phenotype in which emphysema predominates have lower BMI and poorer health-related QOL.