A single dose of tramadol in continuous wound analgesia with levobupivacaine does not reduce post-sternotomy pain: a randomized controlled trial 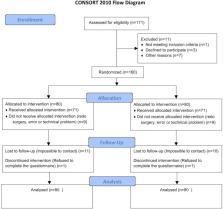 Medial sternotomy is commonly used in cardiac surgery, although it results in intense post-operative pain. The placement of a sternal wound catheter for the administration of local anesthetic represents an effective technique. An initial bolus of tramadol in the sternal wound catheter could potentiate the effect of the local anesthetic and decrease both the post-operative pain and the morphine consumption.

We conducted a prospective, randomized, double-blind study at the University Hospital Center, Dijon, France. Patients requiring scheduled or non-extreme emergency surgery for valve disease, aorta disease, atrial myxoma, or coronary artery bypass graft via sternotomy were included. A sternal wound catheter was inserted at the end of the surgery. The patients were randomized to receive either a 2 mg/kg bolus of tramadol (n=80) or a placebo (n=80) in the wound catheter. The bolus administration was followed by a continuous infusion of 1.25% levobupivacaine for the first 48 hrs following surgery. The patients’ morphine consumption during the first 48 hrs after extubation was recorded. The other investigated variables were the patients’ rescue analgesia, arterial blood gasses, and length of stay in the intensive care unit and in hospital, as well as the incidence of chronic pain at the four-month follow-up point.

The morphine consumption was found to be comparable in the two groups (38 mg vs 32 mg, p=0.102). No effect was found in terms of the arterial blood gasses, lengths of stay, or incidence of chronic pain.

The addition of tramadol to the local anesthetic delivered via a wound catheter following sternotomy did not reduce the patients’ post-operative morphine consumption.

Pain after cardiac surgery: a prospective cohort study of 1-year incidence and intensity.

Hannu Kokki,  P Lahtinen,  Markku Hynynen (2006)
Persistent chest pain may originate from cardiac surgery. Conflicting results have been reported on the incidence of persistent poststernotomy pain with considerable discrepancies between the retrospective reports and the one prospective study conducted to assess this pain. Therefore, the authors conducted a follow-up survey for the first 12 months after cardiac surgery in 213 patients who had a sternotomy. The authors performed a prospective inquiry of acute and chronic poststernotomy pain both before and after cardiac surgery. Two hundred thirteen coronary artery bypass patients received a questionnaire preoperatively, 4 days postoperatively, and 1, 3, 6, and 12 months postoperatively. All patients were asked about their expectations, their preferences, and the location and intensity of postoperative pain. The return rates for the postal questionnaires were 203 (95%) and 186 (87%) after 1 and 12 months, respectively. Patients experienced more pain postoperatively at rest than they had expected to preoperatively. At rest, the worst actual postoperative pain was 6 (0-10), and the worst expected pain as assessed preoperatively was 5 (0-10) (P = 0.013). The worst reported postoperative pain was severe (numeric rating scale score 7-10) in 49% at rest, in 78% during coughing, and in 62% of patients on movement. One year after the operation, 26 patients (14%) reported mild chronic poststernotomy pain at rest, 1 patient (1%) had moderate pain, and 3 patients (2%) had severe pain. Upon movement, persistent pain was even more common: 45 patients (24%) had mild, 5 patients (3%) had moderate, and 7 patients (4%) had severe pain. Patients who experienced moderate to severe acute postoperative pain also reported any chronic poststernotomy pain (numeric rating scale score 1-10) more frequently. Although common, the incidence of persistent pain after sternotomy was lower than previously reported. Also, reassuringly, 1 year after surgery this pain was mostly mild in nature both at rest and on movement.

Use of a continuous local anesthetic infusion for pain management after median sternotomy.

Suzanne Dellaria,  Tijani Issioui,  Chen Shi … (2003)
The use of large doses of opioid analgesics to treat pain after cardiac surgery can prolong the time to tracheal extubation and interfere with recovery of bowel and bladder function in the postoperative period. Therefore, the authors investigated the efficacy of a continuous infusion of bupivacaine 0.25% or 0.5%, at the median sternotomy site, for 48 h after cardiac surgery in reducing the opioid analgesic requirement and improving the recovery process. In this prospective, randomized, placebo-controlled, double-blind clinical trial, 36 consenting patients undergoing open-heart surgery with a standardized general anesthetic technique had two indwelling infusion catheters placed at the median sternotomy incision site at the end of surgery. The patients were randomly assigned to receive normal saline (control), bupivacaine 0.25% or bupivacaine 0.5% via an elastomeric infusion pump at a constant rate of 4 ml/h for 48 h. Patients evaluated their chest pain using an 11-point verbal rating scale, with 0 = no pain to 10 = worst pain imaginable. In addition, the postoperative opioid analgesic requirements and opioid-related adverse effects were recorded. Patient satisfaction with their pain management was assessed at specific intervals during the postoperative period using a 100-point verbal rating scale, with 1 = highly dissatisfied to 100 = highly satisfied. Finally, serum bupivacaine concentrations were measured 24 and 48 h after surgery. Compared with the control group, there was a statistically significant reduction in verbal rating scale pain scores and patient-controlled analgesia morphine use in the bupivacaine-0.5% group. Patient satisfaction with their pain management was also improved in the bupivacaine-0.5% (vs. control) group. However, there were no significant differences in patient-controlled analgesia morphine use between the bupivacaine-0.25% and control groups. Although the duration of the intensive care unit stay (30 vs. 34 h, respectively) was not significantly decreased, the time to ambulation (1 +/- 0.5 vs. 2 +/- 1 days, respectively) and the duration of hospital stay (4.2 vs. 5.7 days, respectively) were lower in the bupivacaine-0.5% group than in the control group. Mean +/- SD serum bupivacaine concentrations at 48 h in the bupivacaine-0.25% and bupivacaine-0.5% groups were 0.5 +/- 0.5 and 1.3 +/- 0.7 microg/ml, respectively. A continuous infusion of bupivacaine 0.5% at 4 ml/h is effective for decreasing pain and the need for opioid analgesic medication as well as for improving patient satisfaction with their pain management after cardiac surgery. Patients in the bupivacaine-0.5% group were able to ambulate earlier, leading to a reduced length of hospital stay.