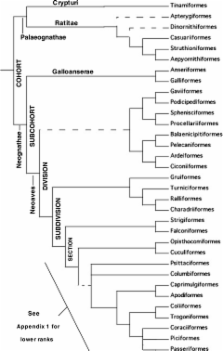 In recent years, avian systematics has been characterized by a diminished reliance on morphological cladistics of modern taxa, intensive palaeornithogical research stimulated by new discoveries and an inundation by analyses based on DNA sequences. Unfortunately, in contrast to significant insights into basal origins, the broad picture of neornithine phylogeny remains largely unresolved. Morphological studies have emphasized characters of use in palaeontological contexts. Molecular studies, following disillusionment with the pioneering, but non-cladistic, work of Sibley and Ahlquist, have differed markedly from each other and from morphological works in both methods and findings. Consequently, at the turn of the millennium, points of robust agreement among schools concerning higher-order neornithine phylogeny have been limited to the two basalmost and several mid-level, primary groups. This paper describes a phylogenetic (cladistic) analysis of 150 taxa of Neornithes, including exemplars from all non-passeriform families, and subordinal representatives of Passeriformes. Thirty-five outgroup taxa encompassing Crocodylia, predominately theropod Dinosauria, and selected Mesozoic birds were used to root the trees. Based on study of specimens and the literature, 2954 morphological characters were defined; these characters have been described in a companion work, approximately one-third of which were multistate (i.e. comprised at least three states), and states within more than one-half of these multistate characters were ordered for analysis. Complete heuristic searches using 10 000 random-addition replicates recovered a total solution set of 97 well-resolved, most-parsimonious trees (MPTs). The set of MPTs was confirmed by an expanded heuristic search based on 10 000 random-addition replicates and a full ratchet-augmented exploration to ascertain global optima. A strict consensus tree of MPTs included only six trichotomies, i.e. nodes differing topologically among MPTs. Bootstrapping (based on 10 000 replicates) percentages and ratchet-minimized support (Bremer) indices indicated most nodes to be robust. Several fossil Neornithes (e.g. Dinornithiformes, Aepyornithiformes) were placed within the ingroup a posteriori either through unconstrained, heursitic searches based on the complete matrix augmented by these taxa separately or using backbone-constraints. Analysis confirmed the topology among outgroup Theropoda and achieved robust resolution at virtually all levels of the Neornithes. Findings included monophyly of the palaeognathous birds, comprising the sister taxa Tinamiformes and ratites, respectively, and the Anseriformes and Galliformes as monophyletic sister-groups, together forming the sister-group to other Neornithes exclusive of the Palaeognathae (Neoaves). Noteworthy inferences include: (i) the sister-group to remaining Neoaves comprises a diversity of marine and wading birds; (ii) Podicipedidae are the sister-group of Gaviidae, and not closely related to the Phoenicopteridae, as recently suggested; (iii) the traditional Pelecaniformes, including the shoebill ( Balaeniceps rex) as sister-taxon to other members, are monophyletic; (iv) traditional Ciconiiformes are monophyletic; (v) Strigiformes and Falconiformes are sister-groups; (vi) Cathartidae is the sister-group of the remaining Falconiformes; (vii) Ralliformes (Rallidae and Heliornithidae) are the sister-group to the monophyletic Charadriiformes, with the traditionally composed Gruiformes and Turniciformes (Turnicidae and Mesitornithidae) sequentially paraphyletic to the entire foregoing clade; (viii) Opisthocomus hoazin is the sister-taxon to the Cuculiformes (including the Musophagidae); (ix) traditional Caprimulgiformes are monophyletic and the sister-group of the Apodiformes; (x) Trogoniformes are the sister-group of Coliiformes; (xi) Coraciiformes, Piciformes and Passeriformes are mutually monophyletic and closely related; and (xii) the Galbulae are retained within the Piciformes. Unresolved portions of the Neornithes (nodes having more than one most-parsimonious solution) comprised three parts of the tree: (a) several interfamilial nodes within the Charadriiformes; (b) a trichotomy comprising the (i) Psittaciformes, (ii) Columbiformes and (iii) Trogonomorphae (Trogoniformes, Coliiformes) + Passerimorphae (Coraciiformes, Piciformes, Passeriformes); and (c) a trichotomy comprising the Coraciiformes, Piciformes and Passeriformes. The remaining polytomies were among outgroups, although several of the highest-order nodes were only marginally supported; however, the majority of nodes were resolved and met or surpassed conventional standards of support. Quantitative comparisons with alternative hypotheses, examination of highly supportive and diagnostic characters for higher taxa, correspondences with prior studies, complementarity and philosophical differences with palaeontological phylogenetics, promises and challenges of palaeogeography and calibration of evolutionary rates of birds, and classes of promising evidence and future directions of study are reviewed. Homology, as applied to avian examples of apparent homologues, is considered in terms of recent theory, and a revised annotated classification of higher-order taxa of Neornithes and other closely related Theropoda is proposed. © 2007 The Linnean Society of London, Zoological Journal of the Linnean Society, 2007, 149, 1–95.

Michael Bielawski,  K Bielawski,  Yang Yang (2000)
The past few years have seen the development of powerful statistical methods for detecting adaptive molecular evolution. These methods compare synonymous and nonsynonymous substitution rates in protein-coding genes, and regard a nonsynonymous rate elevated above the synonymous rate as evidence for darwinian selection. Numerous cases of molecular adaptation are being identified in various systems from viruses to humans. Although previous analyses averaging rates over sites and time have little power, recent methods designed to detect positive selection at individual sites and lineages have been successful. Here, we summarize recent statistical methods for detecting molecular adaptation, and discuss their limitations and possible improvements.

Punctuated equilibria: the tempo and mode of evolution reconsidered