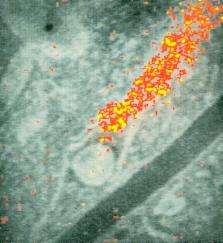 Close contacts with the endoplasmic reticulum as determinants of mitochondrial Ca2+ responses.

W Carrington,  Jonathan Fay,  R Rizzuto … (1998)
The spatial relation between mitochondria and endoplasmic reticulum (ER) in living HeLa cells was analyzed at high resolution in three dimensions with two differently colored, specifically targeted green fluorescent proteins. Numerous close contacts were observed between these organelles, and mitochondria in situ formed a largely interconnected, dynamic network. A Ca2+-sensitive photoprotein targeted to the outer face of the inner mitochondrial membrane showed that, upon opening of the inositol 1,4,5-triphosphate (IP3)-gated channels of the ER, the mitochondrial surface was exposed to a higher concentration of Ca2+ than was the bulk cytosol. These results emphasize the importance of cell architecture and the distribution of organelles in regulation of Ca2+ signaling.

Calcium oscillations increase the efficiency and specificity of gene expression.

M Xu,  Joshua Lewis,  Ricardo Dolmetsch (1998)
Cytosolic calcium ([Ca2+]i) oscillations are a nearly universal mode of signalling in excitable and non-excitable cells. Although Ca2+ is known to mediate a diverse array of cell functions, it is not known whether oscillations contribute to the efficiency or specificity of signalling or are merely an inevitable consequence of the feedback control of [Ca2+]i. We have developed a Ca2+ clamp technique to investigate the roles of oscillation amplitude and frequency in regulating gene expression driven by the proinflammatory transcription factors NF-AT, Oct/OAP and NF-kappaB. Here we report that oscillations reduce the effective Ca2+ threshold for activating transcription factors, thereby increasing signal detection at low levels of stimulation. In addition, specificity is encoded by the oscillation frequency: rapid oscillations stimulate all three transcription factors, whereas infrequent oscillations activate only NF-kappaB. The genes encoding the cytokines interleukin (IL)-2 and IL-8 are also frequency-sensitive in a way that reflects their degree of dependence on NF-AT versus NF-kappaB. Our results provide direct evidence that [Ca2+]i oscillations increase both the efficacy and the information content of Ca2+ signals that lead to gene expression and cell differentiation.