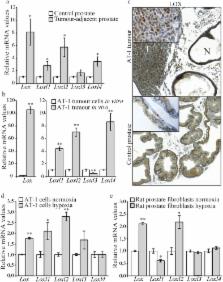 Lysyl oxidase (LOX) and LOX-like (LOXL) enzymes are key players in extracellular matrix deposition and maturation. LOX promote tumour progression and metastasis, but it may also have tumour-inhibitory effects. Here we show that orthotopic implantation of rat prostate AT-1 tumour cells increased LOX and LOXLs mRNA expressions in the tumour and in the surrounding non-malignant prostate tissue. Inhibition of LOX enzymes, using Beta-aminopropionitrile (BAPN), initiated before implantation of AT-1 cells, reduced tumour growth. Conversely, treatment that was started after the tumours were established resulted in unaffected or increased tumour growth. Moreover, treatment with BAPN did not suppress the formation of spontaneous lymph node metastases, or lung tumour burden, when tumour cells were injected intravenously. A temporal decrease in collagen fibre content, which is a target for LOX, was observed in tumours and in the tumour-adjacent prostate tissue. This may explain why early BAPN treatment is more effective in inhibiting tumour growth compared to treatment initiated later. Our data suggest that the enzymatic function of the LOX family is context-dependent, with both tumour-suppressing and tumour-promoting properties in prostate cancer. Further investigations are needed to understand the circumstances under which LOX inhibition may be used as a therapeutic target for cancer patients.

J Lapointe,  C LI,  J. Higgins … (2004)
Prostate cancer, a leading cause of cancer death, displays a broad range of clinical behavior from relatively indolent to aggressive metastatic disease. To explore potential molecular variation underlying this clinical heterogeneity, we profiled gene expression in 62 primary prostate tumors, as well as 41 normal prostate specimens and nine lymph node metastases, using cDNA microarrays containing approximately 26,000 genes. Unsupervised hierarchical clustering readily distinguished tumors from normal samples, and further identified three subclasses of prostate tumors based on distinct patterns of gene expression. High-grade and advanced stage tumors, as well as tumors associated with recurrence, were disproportionately represented among two of the three subtypes, one of which also included most lymph node metastases. To further characterize the clinical relevance of tumor subtypes, we evaluated as surrogate markers two genes differentially expressed among tumor subgroups by using immunohistochemistry on tissue microarrays representing an independent set of 225 prostate tumors. Positive staining for MUC1, a gene highly expressed in the subgroups with "aggressive" clinicopathological features, was associated with an elevated risk of recurrence (P = 0.003), whereas strong staining for AZGP1, a gene highly expressed in the other subgroup, was associated with a decreased risk of recurrence (P = 0.0008). In multivariate analysis, MUC1 and AZGP1 staining were strong predictors of tumor recurrence independent of tumor grade, stage, and preoperative prostate-specific antigen levels. Our results suggest that prostate tumors can be usefully classified according to their gene expression patterns, and these tumor subtypes may provide a basis for improved prognostication and treatment stratification.

Allosteric inhibition of lysyl oxidase-like-2 impedes the development of a pathologic microenvironment.

Daniel Tsai,  Alison Holzer,  Amanda Mikels … (2010)
We have identified a new role for the matrix enzyme lysyl oxidase-like-2 (LOXL2) in the creation and maintenance of the pathologic microenvironment of cancer and fibrotic disease. Our analysis of biopsies from human tumors and fibrotic lung and liver tissues revealed an increase in LOXL2 in disease-associated stroma and limited expression in healthy tissues. Targeting LOXL2 with an inhibitory monoclonal antibody (AB0023) was efficacious in both primary and metastatic xenograft models of cancer, as well as in liver and lung fibrosis models. Inhibition of LOXL2 resulted in a marked reduction in activated fibroblasts, desmoplasia and endothelial cells, decreased production of growth factors and cytokines and decreased transforming growth factor-beta (TGF-beta) pathway signaling. AB0023 outperformed the small-molecule lysyl oxidase inhibitor beta-aminoproprionitrile. The efficacy and safety of LOXL2-specific AB0023 represents a new therapeutic approach with broad applicability in oncologic and fibrotic diseases.

Lysyl oxidase: properties, specificity, and biological roles inside and outside of the cell.

H. Kagan,  Wande Li (2003)
Lysyl oxidase (LO) plays a critical role in the formation and repair of the extracellular matrix (ECM) by oxidizing lysine residues in elastin and collagen, thereby initiating the formation of covalent crosslinkages which stabilize these fibrous proteins. Its catalytic activity depends upon both its copper cofactor and a unique carbonyl cofactor and has been shown to extend to a variety of basic globular proteins, including histone H1. Although the three-dimensional structure of LO has yet to be determined, the present treatise offers hypotheses based upon its primary sequence, which may underlie the prominent electrostatic component of its unusual substrate specificity as well as the catalysis-suppressing function of the propeptide domain of prolysyl oxidase. Recent studies have demonstrated that LO appears to function within the cell in a manner, which strongly modifies cellular activity. Newly discovered LO-like proteins also likely play unique roles in biology. Copyright 2002 Wiley-Liss, Inc.